Yeo, who has played with the Boston Symphony since 1985 and who is on the faculty of the New England Conservatory of Music, will begin teaching at ASU during the 2012 Fall semester. “The School of Music is honored to have a musician of Yeo’s versatility and experience on our faculty,’’ Marshall said.

“His background with one of the finest American orchestras and his research into many types of brass instruments, including early instruments such as the serpent, make him a marvelous resource for our students,’’ she said.

Yeo’s prestigious career includes not only playing for 26 years with the Boston Symphony, but also serving as bass trombonist of the Baltimore Symphony Orchestra, a high school band director in Edison, N.J., and a freelance musician in New York City where he played for numerous Broadway shows, symphony orchestras and a four-year tenure with the Goldman Band.

He began playing the trombone in grade school and by the time he was in high school he wrote in his yearbook that he wanted to play in the Boston Symphony.

His career has not only included nearly three decades with the BSO but also mastery of playing ancient instruments such as the serpent and ophicleide, teaching residencies around the world, authorship of numerous articles about the trombone, historical brasses and music and co-authorship of "Mastering the Trombone" with Edward Kleinhammer.

Yeo has been a frequent soloist with the Boston Pops Orchestra and was the first bass trombonist to perform John Williams’ Tuba Concerto on bass trombone with Williams conducting.

In 1996, Yeo launched the first website devoted to trombone, yeodoug.com, that has more than 10,000 daily visitors and is considered by many as the premiere spot for comprehensive, up to date information about the trombone.

“He is three professors in one,’’ said Sam Pilafian, ASU School of Music professor and founder of the Empire Brass Quintet. “It would be enough that he is one of the world’s leading performers and pedagogues on this instrument, but Doug is also one of the world’s authorities on the history of our low brass instruments, and he can perform on these historical instruments so well that they come back to life as vivid musical sounds from long ago,’’ Pilafian said.

Yeo expects to be in the Valley in February auditioning prospective students.

Little hombres in a gang of creepy, crawling critters are contending in the 2011 Ugly Bug Contest hosted on ASU's "Ask A Biologist" website.

A posse of newcomers is riding into town to take over from a lawless assassin. These little hombres – contenders in the 2011 Ugly Bug Contest – suck blood, hatch deadly parasitic larvae, and eat dung, making them rougher and tougher than the average Hollywood western outlaw. Critters in this gang are squirming to become the most wanted. The one that ropes the most votes will be crowned “ugliest bug,” taking the title away from last year’s winner, the Assassin Bug.

Designed to have fun with science, the 2011 competition marks the fourth year of Arizona State University’s involvement with the Ugly Bug Contest. Begun in 1997 by Northern Arizona University’s Marilee Sellers, the contest was local to Flagstaff for the first decade of its existence. In 2008, after visiting her laboratory and seeing posters for the contest, ASU’s Charles Kazilek, a senior research professional in the College of Liberal Arts and Sciences who sports the moniker "Dr. Biology," began working with Sellers to bring the contest to the Web. 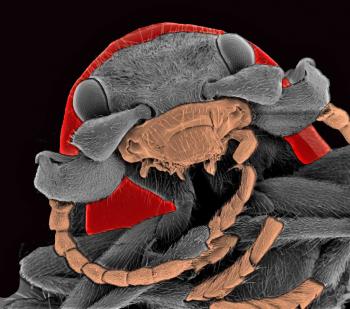 Each year since, the interest, and the number of votes, has grown. In 2010, the Ugly Bug Contest received an unprecedented number of ballots with some 37,400 bug fans showing support for their favorite creature. Entire schools participated in the selection process.

Voters in this year’s contest have until Dec. 15 to choose the most intriguing, heartwarming or stomach-turning bug.

For 2011, a classic western theme inspired the title “The Good, The Bad, and The Ugly Bug Contest.” the contestants earn all three parts of this year’s title, since the nefarious characteristics of the competitors are often balanced by beneficial functions that the different bugs serve. For example, the Ichneumon Wasp, which lays parasitic larvae that kill their hosts, is also used to control species that could harm plants. Even the vile seeming Dung Beetle returns nutrients to the soil as it feeds.

The annual contest is part of the “Ask A Biologist” website, a science portal for children in ASU’s School of Life Sciences developed by Kazilek. The “Ask A Biologist” site and the Ugly Bug contest in particular are intended to be both fun and educational for students, according to Kazilek.

“First, we want people to have fun with the voting and the video, but closely linked to the playful event is real science. The idea of classifying living things, taxonomy, is a large part of the Ugly Bug Contest. Beyond that, we want people to just take some time to learn about insects, how incredibly amazing they look and what they do,” said Kazilek.

The “Ask A Biologist” website houses a number of features such as downloadable wallpapers, coloring pages and puzzles. There are also biology related articles and quizzes to teach visitors of the website about the science. Other features of “Ask A Biologist” include experiments and how-to guides that are available through the activities section of the site. A new feature of the site that is still under development is “Body Depot,” presented in collaboration with the Arizona Science Center. The site serves as a gateway to the field of biology for young students.

New to the Ugly Bug Contest this year is the article “Six-Legged Recipes,” contributed by Mary Liz Jameson, an evolutionary biologist at Wichita State University. The article includes several tasty recipes such as “Bug Bars” and “Spicy Bug Crunch” made of meal worms, and “Chocolate Covered Crispies” and “Yummy Hummers” made with bees. The article details the nutritional value of insects, the environmental benefits of eating insects, and the role that insects play in the cuisines of other countries. There is also a companion audio podcast for the article titled “Been There Dung That,” a reference to Jameson’s study of dung beetles.

Pictures of each of the 10 Ugly Bug contestants are included on the website, and each is paired with a listing of information such as the size of the bug, its Latin name and its habitat along with other interesting facts.

A scanning electron microscope was used to the capture vivid, highly magnified images of each bug in the contest. Along with the bright, colorized versions of the images of the bugs, the original black and white scans are also available on the site. The microscope images allow viewers to see details of the bugs that are too miniscule for the unaided eye.

The current frontrunner in the contest with over 1,571 votes is the Flower Beetle. Also known as Collops vittatus, Flower Beetles feed on soft bodied insects and are important to controlling whitefly populations in cotton fields.

Close behind the Flower Beetle in votes are the Dung Beetle and the Ladybug. Sneaking up in fourth place is the Seed Beetle, with more than 1,000 votes as well. With voting open until Dec. 15, there is still plenty of time for a new leader to emerge. Votes may be cast at http://askabiologist.asu.edu/activities/ubc.

Kazilek is fond of all of the competitors this year, but his favorite bug in the competition is the Ladybug. “They are very beneficial insects that provide a natural pest control for plants. Also, they have cool colors and patterns,” says Kazilek. “What's not to love about that?”

While these endorsements of the Ladybug are compelling, it is up to the public to learn about these crawling contestants and ultimately decide which one deserves the title of Ugliest Bug.