Body Project to raise awareness about the importance of image acceptance

Raise your hand if you count each calorie before consuming it. Have you ever tried something on and asked a friend or partner, “Does this make me look fat?” Well, you are not alone. In the United States alone, the National Eating Disorders Association reports that roughly 20 million women suffer from an eating disorder.

Arizona State University health psychologist Marisol Perez has made it her mission to reverse the negative effects that an unhealthy eating pathology has on college women by bringing a nationally-respected program to campus. 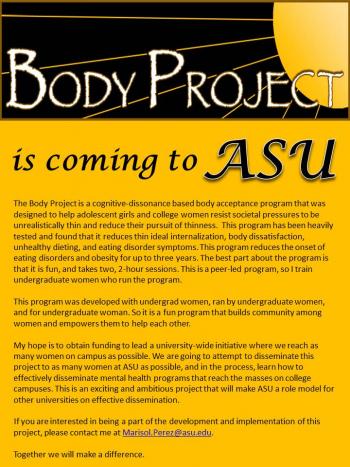 During her time as a professor at Texas A&M University, Perez became involved with the Body Project, a program created by ASU alumnus Eric Stice to serve as a prevention group for at-risk high school students. In her role, she developed and disseminated a unique version of the program that fit within the infrastructure of university life for on-campus sororities.

“They are a great population because freshman year is the first time they are getting to be independent. They are also fully aware of the pressures put on body image,” she said.

To ensure the greatest chance of success, a group of peer leaders were trained on the Body Project’s philosophies and how to provide support to those experiencing body dissatisfaction. The volunteers then led two sessions in which sorority members would discuss the pressures they were facing that led them to have a negative self-image. The open dialogue brought to life many things that are otherwise swept under the rug. At the end of the sessions, Perez says that the symptom level for eating disorders dramatically decreased by 60 percent and the effects lasted up to three years.

“When it came time for recruitment, we saw that the girls brought in a new class that matched their body acceptance ideals. The second year of recruitment brought the same thing. We were making the whole sorority healthier to the point where they wouldn’t need us anymore,” she said.

Along with the sessions, the project provided opportunities for community activism. The women all wrote letters to local high school students explaining what they know today that they wished they would have known then. Altogether, 250 letters were delivered. Another impactful campaign had five men approach fellow male students at coffee shops and ask them what they look for in a partner. From the 500 responses, attributes related to personality and companionship were overwhelmingly reported over physical qualities.

“It made our message so much more powerful. The guys were reinforcing that there isn’t a single physical type they are looking for,” said Perez.

Now at ASU, she would like to bring the project to all four campuses and replicate results. University leaders and departments have already expressed tremendous support. Those interested in becoming a peer leader or being involved in the program may contact her directly by email.

The Department of Psychology is an academic unit in ASU's College of Liberal Arts and Sciences.

Bacterial cells use an impressive range of strategies to grow, develop and sustain themselves. Despite their tiny size, these specialized machines interact with one another in intricate ways. 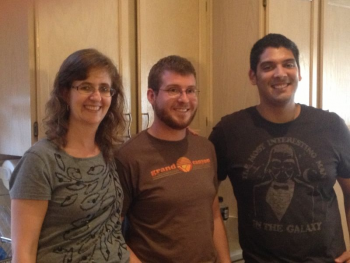 In a pair of papers recently appearing in the journal Biotechnology and Bioengineering, the group demonstrates that the light-sensitive green sulfur bacterium Chlorobium can act in tandem with Geobacter, an anode-respiring bacterium. The result is a light-responsive form of electricity generation.

“Geobacter is not light responsive in its own right because it’s not a photosynthetic organism,” says Badalamenti, lead author of the two new papers. In contrast, photosynthetic Chlorobium is unable to carry out the anode form of respiration necessary for electricity production. “But when you put these two organisms together, you get both a light response and the ability to generate current.“

The electrons Geobacter acquires from its photosynthetic partner Chlorobium can be measured and collected in the form of electricity, using a device known as a microbial fuel cell (MFC) – a kind of biological battery.

The research was carried out at the Swette Center for Environmental Biotechnology, which is under the direction of Regents’ Professor Bruce Rittmann. The goal of the center is to exploit microorganisms for the benefit of society. These efforts typically involve the use of bacteria to clean up environmental pollutants or to provide clean energy. In the case of MFC research, bacteria can assist in both of these activities, generating useable electricity from energy-rich waste.

In the new studies, the researchers explore the possibility of enhancing electricity production in MFCs by examining the function of light-responsive Chlorobium, a photosynthetic green sulfur bacterium. The resulting experimental configuration, in which light responsive bacteria play a role in energy generation, is known as a microbial photoelectrochemical cell (MPC).

To explore the behavior of photosynthetic bacteria in an MPC, the team first used a clever means of selectively enriching phototrophs, such as Clorobium, in a mixed culture by poising the device’s anode at a particular electrical potential that was favorable for phototrophic growth, yet unfavorably low for the growth of non-photosynthetic anode-respiring bacteria.

The researchers then noted an intriguing result: electricity production measured at the anode was linked to phases when the MPC was in total darkness and dropped during periods when the bacterial culture was exposed to light.

The group detected the presence of Chlorobium in the enrichment cultures using pyrosequencing and reasoned that the observed negative light responsiveness was either due to photosynthetic Chlorobium directly transferring electrons to the anode during dark phases or instead, transferring these electrons to a non-photosynthetic anode-respiring bacterium like Geobacter, through an intermediary reaction.

In subsequent experiments, pure cultures of either Chlorobium or anode-respiring Geobacter were examined as well as co-cultures combining the two. In the case of Chlorobium alone, light responsive electricity generation was not observed. Similarly, pure Geobacter cultures failed to produce electrical current when deprived of an electron donor like acetate in the medium.

Only when the photosynthetic Chlorobium were combined with anode-respiring Geobacter in co-culture experiments did electricity generation occur, and it did so in a negative light-responsive manner – increasing in periods of darkness and falling off during light phases.

The experimental results of the co-culture study suggest the following scenario: Chlorobium bacteria gather energy from light in order to fix carbon dioxide and fuel their metabolism. During dark phases however, they sustain themselves by switching from photosynthesis to dark fermentation, using energy they have stored. Acetate is produced as a metabolic byproduct of this dark phase fermentation.

During periods of darkness, anode-respiring Geobacter gains electrons from the acetate produced through Chlorobium metabolism, transferring them to the MPC anode, thereby producing the observed rise in electrical current. “In this second study, we deliberately removed any sources of electrons that were present in the growth medium,” Badalamenti says. When the two bacterial communities were forced to interact, it was clear that Chlorobium was helping to provide food for the Geobacter, in a light-responsive manner.

The authors note that one of the attractive advantages of their study is that electricity generation measured at the anode can be used as a highly accurate surrogate for the complexities of bacterial metabolism taking place in the MPC culture. “Unlike having to measure metabolites or cell growth either microscopically or through chemical intermediates, we are able to construct a co-culture system in which one of the readouts is electricity,” Badalamenti says. “We can then monitor metabolism in the system in real time.”

Further questions concerned whether the presence of Chlorobium may provide benefits for Geobacter in naturally occurring cultures, not confined to MFC devices. In anode-free experiments, the group showed that the very survival of Geobacter in the absence of alternative sources of electrons was contingent on the presence of Chlorobium-derived acetate.

In addition to establishing a mechanism for light-responsive electricity generation in MFCs, the research points to the power of similar co-culture studies for elucidating a range of energy-producing microbial interactions.