When Ashleigh Gonzales decided to major in molecular bioscience and biotechnology, a highly visual major, some wondered if the blind woman had bitten off more than she could chew. 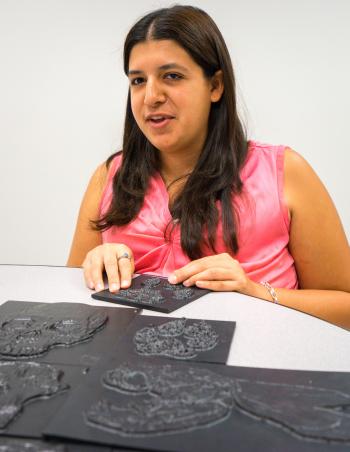 She proved her doubters wrong.

Gonzales, who received her undergraduate degree in 2013, is graduating with a master's in biology and society. Along the way she not only has found that her love of biology far outweighs her sight limitations, but she also found ASU professors who helped her succeed.

“The faculty were really supporting and helpful,” Gonzales said. “They helped me direct myself in a way that I actually wanted to be going, rather than just floating along to get a degree.”

One key mentor was Debra Page Baluch, an associate research scientist in the School of Life Sciences.

“I’m a first-generation college student, so I was kind of getting into a new world all by myself,” Gonzales said. “She showed me how to get through the college system and make the best of it by getting me to attend conferences and representing my research.”

One research project was the development of 3-D tactile boards that visually impaired people could use to help them understand science and math. Much of how a student learns microbiology is through sight. Gonzales had to rely on verbal descriptions to get through some of her coursework. She developed 3-D tactile boards with Leanne Harris as part of a research project to help the visually impaired. Gonzales tested them during her master’s work.

Gonzales expects to eventually refine the tactile boards, but now she is turning her attention to her first job. She will teach math, science and technology at the Southern Arizona Association for the Visually Impaired.

Performing on the basketball court helped Sai Tummala relate to the physiology classes he was taking and motivated him to excel. The honors student will graduate this May with a degree in biology.

To hear Sai Tummala tell it, basketball helped him in his STEM classes. 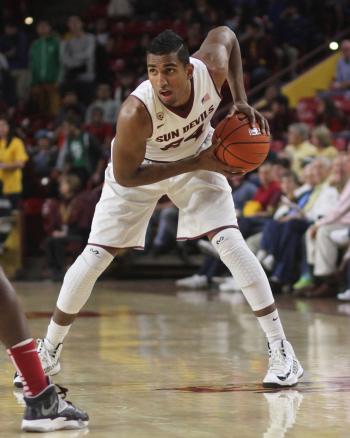 Performing on the court helped him relate to the physiology classes he was taking and motivated him to excel. Both were difficult, but he learned to stick with the things he wanted to do.

Tummala played on the Sun Devils men’s basketball team, appearing in 14 games and averaging little more than 4 minutes per game.

But in the classroom he really starred.

Tummala is a member of Barrett, The Honors College, carried a 4.0 grade-point average and made the dean's list every semester.

He will graduate with a degree in biology, animal physiology and behavior. His plans include medical school, having already passed the Medical College Admissions Test.

“Both my parents are physicians. So growing up I was naturally drawn to it,” Tummala said of his choice to go into STEM. “I thought it was easy and really interesting.”

Now that he is graduating, Tummala relishes the opportunities he was given and the help he received along the way. As a result he has a great appreciation for those who teach.

He learned about teacher caring when working on his thesis, which was an assessment of the Bio Bridge student transition program.

“It was cool for me to see the way teachers and professors in institutions work, and try to improve student experiences,” he said.

This supported a fact he experienced while at ASU.

“The teachers I’ve had are really passionate about teaching, and they push their students to go beyond the classroom and explore,” he said. “It was surprising to me while at ASU how much STEM teachers really care. It was very impressive.”

Tummala plans to take a year off and then get serious again about his future in STEM.

“I’m hoping to go to med school,” he said. “I’m interested in orthopedics, orthopedic surgery, so I can stay around sports for the rest of my life.”