Eight teams, sixteen players and 12 rounds can only mean one thing: preliminary play of the 2011 ASU Academic Bowl.

The game: a fast-paced question-and-answer trivia game, where players must buzz in to win toss-up questions for the chance to win point-padding bonus questions. The players: undergraduates from Arizona State University's various colleges. The prize: $24,000 in scholarship money and school pride. 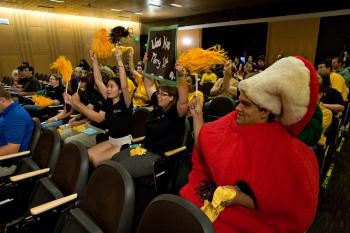 Mark Jacobs, dean of ASU's Barrett, The Honors College, moderated the first round.

With plenty of fans in the audience to cheer them on, the College of Nursing & Health Innovation and the School of Nutrition & Health Promotion took on the Herberger Institute for Design and the Arts Gold team. Nursing took an early lead, only to let Herberger Gold catch up by correctly answering questions pertaining to poet Robert Frost. Herberger's lead grew more dramatic as the match progressed, ending in a 130-40 win over Nursing.

The School of Sustainability got off to a good start with a fast 30 points for their whip-smart retorts pertaining to writer Stephen King and the aurora borealis. However it was no match for the Ira A. Fulton Schools of Engineering Gold team, who quickly caught up by way of correct answers in the social sciences category. With a force similar to that displayed in the film "Star Wars," about which they answered questions correctly, Engineering took a hefty lead and finished the match 270-80.

The engineers and the artists went head-to-head in the third match. Engineering Gold pulled an early lead after answering correctly – of all things – questions about art. Continuing to shock with their knowledge of literature and history, the engineers continued their lead at the halfway mark and didn't stop there. Although Herberger managed to gain some ground by correctly naming U.S. presidents who died in office, in the end Engineering Gold would prove victorious with a final score of 240-45.

With one loss each, the College of Nursing team and the Sustainability team felt the pressure to win the fourth match of the night. Under the double-elimination rule of the game, only one of these teams would be able to continue onto further rounds in the competition. Nursing managed to pull ahead, but the lead was narrow. It appeared to be anyone's game until Nursing dramatically answered a series of toss-up and bonus questions. When the buzzer sounded, Nursing was ahead by 70 points. With a final score of 120-50, the School of Sustainability team was eliminated from the competition.

Who is the author of "Go Tell It on the Mountain"? This question was lost on both the Herberger Gold and Nursing teams, who battled as best they could to stay in the competition. Herberger Gold pulled ahead with a 70-point lead by correctly answering questions pertaining to geography and history, while the College of Nursing team racked up  points with biology questions. Their innate musical knowledge served Herberger well, as they took a sizable lead over Nursing and ended the match victorious. With a final score of 185 to 60, Nursing was sent home.

Trying to hold onto its perfect no-loss record, Engineering Gold faced off with Herberger Gold for the second time. Herberger Gold had one loss under its belt and knew they couldn't afford to give the engineers much leeway. With dreams of semi-finals dancing in their heads, the Engineering team navigated successfully around the classics and the Harry Potter books to gain a 100-plus point lead. When the buzzer sounded, moderator Mark Jacobs pronounced Engineering Gold the winner of the match. The final score was 225 to 100.

Casey Seidman, with the Office of Public Affairs, moderated the second round.

The round got off to an even start, as both the Herberger Institute Maroon team and the Mary Lou Fulton Teachers College team battled for toss-up questions about circles, U.S. history, European sculpture and current affairs. While the Herberger Maroon team fought hard to win points, it wouldn't be enough to beat Mary Lou Fulton Teachers College. In the end, the teachers won 120-70.

In a round between the veterans, College of Liberal Arts and Sciences (CLAS) Maroon team, and the newbies, the College of Technology and Innovation (CTI) team, the veterans would rely on their past experience and well-rounded knowledge to take a major lead before CTI even came alive on the board. Before the College of Technology and Innovation could buzz in for the first time ever in an Academic Bowl event, CLAS Maroon had dominated the match with a staggering 190 points. The final score favored CLAS Maroon, who beat CTI with a final score of 255-50.

CLAS Maroon continued their winning trend, carrying a 60-plus point lead for much of the match against the Mary Lou Fulton Teachers College. Questions about fatty acids, Henry VIII, and pop singer Keisha characterized the high-energy, back-and-forth play. The Teachers College got on the board early and worked their way to 100 points, but it would not be enough to defeat the almighty CLAS. In the end, CLAS won 250-100.

College of Technology and Innovation jumped to life early in their matchup against the Herberger Institute Maroon team. With a near 50-point lead, CTI charged ahead of Herberger by correctly answering geography questions and naming world-famous scientists, such as Marie Curie. CTI's lead only deepened as questions about popular films and Spanish explorers provoked their eager replies. The round came to a close with a scoreboard that read 170-55 and a first-time winner: the College of Technology and Innovation. Unfortunately for Herberger Maroon, it was time to go home.

The College of Liberal Arts and Sciences Maroon and the Mary Lou Fulton Teachers College faced off in the final match. And the stakes were high. Both vied to be the team that would be accompanying Engineering Gold to the semi-finals.

In typical fashion, CLAS Maroon led their dance partner – through a whirling maze of toss-up questions of which they won nearly all. Showing off their knowledge of Greek mythology and economics, CLAS deepened their lead by more than 150 points. It was enough to send the Teachers College home. CLAS Maroon cinched the match. The final score was 360-45.

The College of Liberal Arts and Sciences Maroon team and the Ira A. Fulton Schools of Engineering Gold team will continue on to the semi-finals, scheduled for 7 p.m., Thursday, in the Eight, Arizona PBS studios on ASU's Downtown Phoenix campus.

The two teams will join the two other leading teams, to be determined Tuesday night, when opening round action continues, from 4 p.m. to 9 p.m., Tuesday, Oct. 4, in the Pima Auditorium of the Memorial Union, on the Tempe campus.

Reiley Jeyapaul’s work in pursuit of a doctoral degree in computer science and engineering focuses on finding solutions to the problems that cause computers to crash, lose data or behave erratically.

His progress has been impressive enough to earn invitations to present research papers on his projects at two of the most prominent international computer science and engineering conferences. He presented at the International Conference on Parallel Processing in Taipei, Taiwan in September. He’ll return to Taipei in October to present at the International Conference on Compilers, Architectures and Synthesis of Embedded Systems. 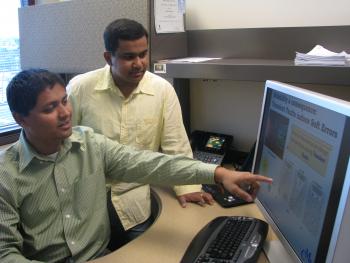 The invitations to present at these high-profile gatherings of computer scientists are notable achievements, and especially rare for a student, says Aviral Shrivastava, Jeyapaul’s doctoral studies advisor.

Shrivastava is an assistant professor in the School of Computing, Informatics, and Decision Systems Engineering, one of ASU’s Ira A. Fulton Schools of Engineering. He notes that only about 20 percent of the scientists and engineers who submit papers to the conferences are chosen to present.

“Reiley submitted two separate papers and they were both accepted, which is extraordinary. Overall this year, four of his papers have been accepted for publication and presentation at prestigious computer design conferences,” Shrivastava says.

Jeyapaul, who has a master’s degree in electrical engineering from ASU, is working in an emerging specialty called reliable computing.

Reliability challenges have arisen in the wake of the development of smaller and smaller transistors used in computers. The tiny transistors have enabled computers to perform more rapidly and to use less power to operate. But at the same time they present the drawback of more frequently exposing computers to disruptive electrical phenomena.

Jeyapaul’s goal is to keep computation reliable despite that the smaller transistors make computing systems more prone to malfunctions. He has been developing new multi-core processors for computers. Multi-core processors are comprised of two or more independent cores that read and execute programmed instructions.

Jeyapaul has been able to redesign computer components so that a system can diagnose and fix problems without slowing down the cores. This enables computer systems to perform the check-and-correct function while computational activities proceed at a normal pace.

The big challenge is to be able to do this without slowing computing operations when even more checks and corrections will be needed as additional new  functions are loaded on to computers in the future.

His solution helps ensure more dependable computer operation, and improves on earlier methods that caused computing to slow down or cease while problems were resolved.