A Biblical primer for handling wealth

Many churches and synagogues offer them: classes on how to manage your money from a religious perspective.

All too often, however, these classes only skim the surface, and end up with a focus on the instructor’s budgeting systems and an attempt to sell the books he or she has written. 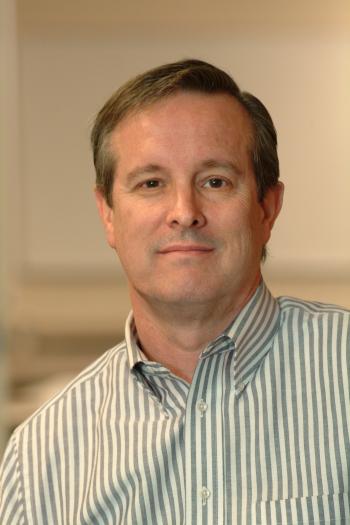 So, where should a person searching for answers about the right and wrong ways to handle money and wealth look?

To the Bible, of course, says Michael S. Moore, a faculty associate in the School of Historical, Philosophical and Religious Studies at ASU. And, to other ancient texts such as “The Epic of Gilgamesh” and “The Atrahasis Epic.”

Of course, the Bible and these other texts don’t have specific commands, such as “keep an emergency fund of six months living expenses” or “pay your full Visa bill every month,” but, Moore says, they do address the broader issues of wealth and possessions, slavery and inheritance.

Moore examines these topics in a new book titled "WealthWatch: A Study of Socioeconomic Conflict in the Bible," which he wrote over a period of eight years.

“The purpose of this book is to help postmodern Westerners understand what the Bible has to say about wealth and possessions, basing itself on the presumption that (a) nobody can understand themselves apart from some recognition of their spiritual roots, and (b) that these roots sink deeper into the pages of the Bible than most Westerners realize,” Moore said.

Moore, who was a Christian pastor for 30 years in Pennsylvania, Texas and North Carolina, retired from the pastorate two years ago. He earned a doctoral degree in Old Testament/Hebrew Bible from Drew University in 1988 and has taught at ASU since 1991.

Moore said he was drawn to the topic of how the Bible addresses wealth and other socioeconomic topics because “I live in one of the richest countries on earth, yet one whose wealth is terribly, relentlessly, and systematically squandered through debt slavery, addiction, corruption and bribery (often by religious people who ought to know better).”

“Most people read the Bible through the lens of the three-step process: shallow overview of selected prooftexts (part of a text taken out of its context) about wealth and possessions divorced from their literary-historical contexts; selective economic prejudices laid over these prooftexts designed to champion the instructor’s preconceived bias; and ‘authoritative’ religious instruction on ‘what the Bible says’ about wealth and possessions,” Moore said.

But to truly understand what the Bible says about wealth and possessions, one should delve deeply into what Moore says is the “ideological core” of the Bible – the Pentateuch or the Torah – and compare that text with other “great texts” of the same literary-historical context.

“You have to understand the other literature from the time period. People do it with Homer, but they don’t do it with Isaiah,” Moore said.

And why study what the Bible says about wealth and possessions?

“The fact remains that the ancient Near Eastern library commonly called the Bible is the oldest and most influential contributor to Western economic values,” Moore wrote. “In spite of its Eastern origins (and the West’s ‘moral decay’), nothing else explains why so many people turn to the Bible for socioeconomic help instead of Xenophon’s ‘Oeconomicus,’ Kautilya’s ‘Arthahastra,’ Ibn Sina’s ‘Kitab al-Siyasa’ or Marx’s ‘Das Kapital.’

“Nothing else explains why this sacred text exercises so much influence on so many, regardless of geographic location, ethnic identity, religious belief, and/or socioeconomic status.”

For his study, Moore chose some epic poems from Mesopotamia, some Jewish texts from Syria-Palestine and some Nazarene parables. “Choosing which epic poems, which Jewish texts, and which Nazarene parables will doubtless seem arbitrary to some readers, yet interpretation against some context is preferable to interpretation against no context,” he wrote.

Moore begins by looking at possible definitions for the concept of “wealth.”

Some see wealth as “the spontaneous production of the earth or the result of labor employed in the cultivation of the earth,” he wrote, while others link wealth to money, which has an exchangeable value.

Moore questions whether “wealth means one thing to pre-moderns and something else to post-moderns.” He writes that many people think it does, “though one historian believes that the ancients have no word for our modern concept of economics … though they do have definite ideas about how society should be ordered.”

Today, Moore says, most people will agree that the pursuit of wealth – money, possessions, property and good looks – is paramount in Western cultures.

So if the Bible doesn’t specifically address checking accounts and Visa bills, why should one learn what the ancient Near Eastern texts have to say about wealth and possessions? Because, Moore says, their historical lessons are valuable ones.

Read in its proper context, the Bible champions a simple equation that represents the process and problem of acquiring wealth, Moore concludes: creation = acquisition + protection.

The creation of wealth should equal acquisition of assets and protection of those who need it, such as the poor and ill, but the equation is rarely completed, Moore said. “That’s what’s been lost in, for example, the health/wealth televangelists. That culture believes the more you acquire the more successful you are, and the more spiritually blessed.”

Moore said that the world’s major monotheistic religions – Christianity, Islam and Judaism – each deal with the creation of wealth in a different manner, and he wrote “WealthWatch” because “I couldn’t find a textbook that would lay out the ideas embedded in ancient Near Eastern texts enough to deal effectively with the extremists now abusing them.”

ASU alumni will be actively involved in honoring the legacy of former Sun Devil and Arizona Cardinals football player Pat Tillman, in conjunction with Pat's Run to take place April 21 in Tempe.

ASU alumni will be actively involved in honoring the legacy of former ASU Sun Devil and Arizona Cardinals football player Pat Tillman, in conjunction with the popular Pat’s Run being to take place April 21 in Tempe.

The 4.2-mile run/walk, which last year drew more than 35,000 people, is the signature fundraising event for the Pat Tillman Foundation, which was formed after Tillman’s death in 2004. Proceeds from Pat’s Run support the organization’s Tillman Military Scholars program. 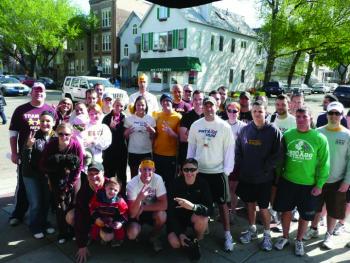 ASU Alumni Association volunteers will staff the Mile 1 aid station at the event, and the association’s Arizona State Young Alumni group for Sun Devil graduates under age 35 is organizing a race team to compete in the event.

In addition to the activities in Tempe, 25 local chapters of the ASU Alumni Association scattered across the United States will be hosting “shadow runs” in conjunction with the Tempe event. The shadow runs are community-oriented, casual affairs, commonly held at parks, schools and recreation areas.

To volunteer to staff the Mile 1 aid station or join the ASYA race team, visit http://alumni.asu.edu/volunteer/8th-annual-pats-run. To view a complete list of cities hosting shadow runs in conjunction with Pat’s Run, visit http://www.pattillmanfoundation.org/pats-run/race-info/shadow-runs/.