Behind the scenes of King's speech at ASU

Earlier this year ASU University Libraries and the King Center in Atlanta made available for the first time a previously unknown recording of a speech Martin Luther King, Jr. gave at Arizona State University approximately a half-century ago.

Titled “Religious Witness for Human Dignity,” King delivered the speech to an audience of 8,000 people at ASU’s Goodwin Stadium on June 3, 1964 – less than one month before the landmark Civil Rights Act was signed. 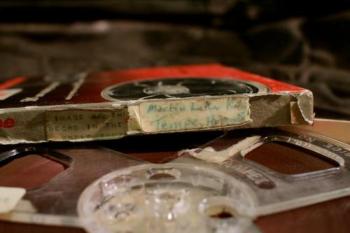 The recording was among a box of reel-to-reel tapes donated by deceased Phoenix businessman and civil rights leader Lincoln Ragsdale and discovered by Phoenix resident Mary Scanlon while shopping at a Valley Goodwill store.

After the discovery, a committee of ASU archivists, historians and scholars worked over the next few months to verify the recording’s authenticity. Kristen LaRue, outreach program coordinator in ASU’s Department of English, transcribed the speech for the university and immersed herself in the sounds of King’s voice for several hours over two days.

LaRue spoke to ASU News about her experience, which she recalled as a “geeky thrill” as well as an intimate brush with history.

Q: Before you transcribed the MLK tape in Tempe, were you familiar with the teachings of Dr. King?

KL: Growing up in rural 1970s Montana, most of what I watched on television – including footage from the civil rights movement – seemed exotic and foreign. The only familiar thing in Dr. King’s appearances was what I heard – and that was the English language. Even that was inflected with an unfamiliar southern accent (my own speech had something of a Fargo, North Dakota, sound). I knew by listening to news anchors and commentators that King was important, that he had done and said something special and good. But those events seemed very, very far away.

I moved to Arizona in 2002. I first saw the ASU photograph of Dr. King sitting next to G. Homer Durham on the library archives website when I was doing research for something else. I couldn’t believe he had been here. Here! Where I live! It made me feel not-so-removed from that incredible moment in history. Then when I heard a recording had been found – utter nerd joy. To imagine him speaking in my environs – in the early summer desert air, in the presence of Palo Verde trees and saguaros – was a new intimacy.

Q: Did you do a straight listen before you transcribed the tape, and if so, what was running through your mind as you were listening to Dr. King's words?

KL: Because the tape wasn’t yet available to the public, I knew I needed to work quickly on the transcription. I didn’t do a straight listen before starting work on it. The listening I did could be described as “deep,” as I played and re-played the 45-minute tape for nearly two days straight in order to type his words exactly as spoken. I remember thinking that I was writing down history – for the first time. Others had, of course, listened to this speech before I did, but no one in the world had yet put all of these particular words to paper. It was very, very exciting for me.

Q: The U.S. Senate filibuster, which tried to block passage of the civil rights bill, was the new wrinkle in this speech. What can you tell me about the filibuster and why it ultimately failed?

KL: Since I’m not a King or civil rights expert, I don’t know much about the filibuster itself. However, through the work of ASU English professor Keith Miller, I am a bit familiar with King’s recycling of his and others’ words. Through research I found that he gave portions of this speech – verbatim – at other appearances across the country. Apparently King had a mental catalogue from which he could pull speech material as needed, or as “the spirit moved him.” But I found it meaningful that since the filibuster was tied to a very specific moment in time, this part of the speech had a limited shelf life, so to speak. It wouldn’t have made sense to repeat it in other addresses.

Q: There's been mention of King's exhaustion in his voice due to his relentless speaking schedule and a “nagging virus bug." Did you pick up on that right away?

KL: I’m a music historian and have [a master's] in music history and literature from ASU. I did my early training in vocal pedagogy and performance, and have some later training in music therapy. So, for better or worse, I am always listening to voices for clues about a person. I was anticipating a certain timbre when I first heard King’s voice on the tape, so I was surprised to hear it sound tight, gravelly and tired – not the fired-up, energetic presence with which I was familiar. But it was unmistakably his, which was authenticated by our team of scholars. It was thrilling to hear him get started on one of his famed, cascading orations that sounds like he’s preaching at church. From what I could hear on the recording, the Arizona crowd was slightly less boisterous than a southern Baptist congregation, but there was quite often enthusiastic applause and, at several points, laughter.

Keith Miller told me about the incredible number of public appearances and speeches King was making in those days. I also knew he had two others earlier that day in Phoenix, which put the fatigue I heard into context.

Q: What did you personally get from this experience?

My personal takeaway: to have had a very small part in helping this recording, and therefore this speech, find its way into civil rights history is very satisfying. I do often enjoy working “behind the scenes” on various projects, but none of these projects had gone on to have national impact. Until now.

The Department of English is an academic unit in ASU's College of Liberal Arts and Sciences.

Four high school students joined the ASU Project Humanities team this summer for the enjoyable and meaningful experience that it offers.

Four high school students joined the Project Humanities team this summer for the enjoyable and meaningful experience that it offers. These students will spend their summer at ASU writing press releases, facilitating social media, editing documents, working with and being mentored by ASU graduate and undergraduate students, creating videos around the seven principles of Humanities 101 – respect, self reflection, integrity, compassion, kindness, empathy and forgiveness – and helping make changes to the website.

Alina Cao will be a senior at ASU Preparatory Academy in Phoenix this fall. Alina joined Project Humanities as a social media intern not only because of “the opportunity and experience it can provide" for her, but also because of what “Project Humanities is about and tries to promote.” Alina ranks as first in her class and was student of the year as a junior. She hopes to become either an athletic trainer or a physical therapist one day. 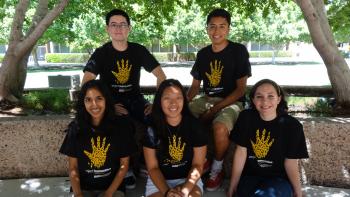 Rohini Nott, a junior at BASIS Chandler with a love for the sciences and soccer, has spent her summer volunteering at her local hospital, playing futsal and taking courses at the community college. She also joined the Project Humanities team, because she contends, “in a typical day, a person must be able to embrace other perspectives and values, which is what the project emphasizes.”

A junior at ASU Preparatory Academy this fall, Angela Hagan joined Project Humanities because her “most pressing intellectual goal is to learn about and understand as many different cultures, societies and religions as possible.” Angela loves writing, a skill which she hopes to use to contribute to Project Humanities, an idea that she believes is "extremely important to make people aware of."

Matthew Weisbly, a rising senior at ASU Preparatory Academy, wants to become a history professor and an author one day. Project Humanities appealed to Matthew because of “its focus and drive on raising awareness of the humanities,” which have great interest to him. Matthew sees the project as a way to volunteer in the community and be involved as a student. Most importantly to Matthew, it is about “keeping something for the future and ensuring that others can have the same opportunities we have.”

In addition to these high school students, Luis Avila – coming to the project through the Phoenix Youth Reach and Invest in Summer Employment  (RISE) program – joined the internship team as well. Luis is only 18, but he already knows he wants to develop a scholarship foundation of his own someday that focuses on assisting low-income students in obtaining a college education. A rising sophomore, he is currently pursuing an industrial engineering degree at St. Mary’s University.

Despite their varied interests, these students who are connected through Project Humanities believe that interning with the initiative will be a meaningful experience for them. Director of Project Humanities Dr. Neal Lester says, “Project Humanities is very fortunate to have with us this summer an exceptional team of ambitious and talented interns who each bring energy and excitement about humanities across disciplines.” Lester wants the students’ ideas about how to bring more high school students into Project Humanities programming. He expects not only that “this experience will familiarize them with the broad sense of what Project Humanities does,” but also “what life at ASU is like as potential students.”

For more information about Project Humanities, visit humanities.asu.edu, or call 480-727-7030.