In the baboon social network: 'Nice' gals may finish first

Some pairs of female baboons form relationships that look a lot like “friendships,” a group of researchers has found.

The females spend time hanging out together and grooming each other. They don’t fight so much and support each other when they get into conflicts with other members of their groups. These relationships seem to confer important benefits on females, including living longer, reproducing more successfully, and coping better with stress. 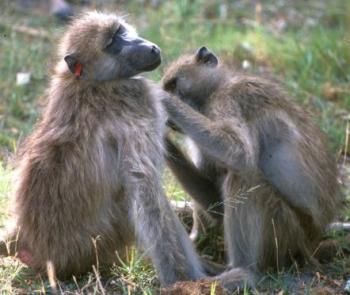 Arizona State University primatologist Joan Silk is one of a team of researchers, including Robert Seyfarth and Dorothy Cheney at the University of Pennsylvania, who have been documenting the social lives of female baboons in the Okavango Delta of Botswana.

“We have spent years monitoring the social lives of baboons and other primates, with the idea that evolution has shaped social behavior to enhance the reproductive success of individuals,” said Silk. “But we were not able to link what we knew about variation in social behavior to the reproductive success of individuals. Now we can. And this raises new questions that we wanted to go back to the data to answer.”

In particular, Silk and her colleagues wondered why some female baboons form these close social “friendships” and others do not, and why some female baboons were more successful than others at forming strong social bonds. Seyfarth, Silk, and Cheney’s paper on the “Variation in Personality and Fitness in Wild Female Baboons” was published in the October 1, 2012 in the Proceedings of the National Academy of Sciences.

The long-term study focused on detailed records of 45 wild female baboons observed in the Moremi Game Reserve in Botswana from 2001 to 2007.

Some explanation for the friendly behaviors were due to availability of close relatives – mothers, daughters, sisters – with whom females typically form very close bonds. Silk and her colleagues wondered if, using the observational data collected over the course of seven years, they could find out if the behavior of the females themselves corresponded to personality types.

The literature on personality in animals has two different histories. One comes from psychology where researchers look at personality dimensions that are seen in humans and also seen in animals, like extroversion or introversion. The other comes from behavioral ecology where researchers ask whether a personality characteristic is advantageous or disadvantageous, such as being shy or bold, to answer what does being shy or being bold get you living in the world? The researchers wished to find a middle ground between these two approaches and relied on the animals’ interactions to define their “personality styles.”

The researchers tabulated the frequency of various types of behavior, including friendly things like embraces and hostile things like threats and attacks. They also kept track of whether females grunted when they approached other females. Grunting signals an intention to behave nicely, and females use grunts to resolve conflicts, to reassure lower ranking females that they won’t harm them, and to facilitate interactions with mothers of newborn infants. (For reasons that we don’t fully understand, baboons are fascinated by other females’ babies and often try to smell, touch and handle them.)

This procedure generated three personality dimensions that the researchers labeled “Nice,” “Aloof,” and “Loner.” The Nice females were more likely to perform friendly behaviors. They were also more likely to grunt when they approached others and spent little of their time alone. Aloof females were more aggressive than others and grunted at high rates only when approaching higher-ranking females who had infants that they wanted to handle. Loner females were often alone and grunted most frequently only when approaching high-ranking females. These personality traits seemed to be relatively consistent from year to year. Females’ personality styles were related to the strength of their social bonds with other females – Nice females were more likely to have strong social bonds than other females. Thus, niceness may ultimately be linked to females’ longevity and reproductive success.

Silk’s research centers on the evolutionary processes that shape behavior and examines the value of relationships to females. Her work suggests that there are important parallels between humans and other primates.

“We know that some people are more likely to form social bonds than others, and the quality of social networks has important effects on health and life span. Baboons seem to be much the same,” said Silk. “We are not yet sure how deep these similarities are, but it seems likely that these kinds of close, supportive, stable relationships have played an important role in the lives of humans for millions of years.”

Joan Silk is a professor in the School of Human Evolution and Social Change and an affiliated scientist with the Institute of Human Origins, which are both in the College of Liberal Arts and Sciences.

Learn more about the pros and cons of two significant propositions on this year's Arizona ballot. Several debates between a supporter and an opponent of Propositions 204 and 121 will be held at ASU's Tempe and Polytechnic campuses next week.

Sun Devils Fall To #2 Texas, Bow Out of NCAA Tournament

Learn more about the pros and cons of two significant propositions on this year’s Arizona ballot. Several debates between a supporter and an opponent of Propositions 204 and 121 will be held at Arizona State University’s Tempe and Mesa campuses next week.

The debates are free and open to the public.

For the Tempe campus debates, park in the visitor lot north of Apache Boulevard. Walk north to the Memorial Union (MU). Both rooms are located on the second floor. See the Tempe campus interactive map for more information on getting to ASU Tempe: http://www.asu.edu/map/interactive.

For the Polytechnic campus debate, parking is available in Lot 10. For directions to ASU’s Polytechnic campus, visit http://www.asu.edu/map/interactive/?campus=polytechnic. The Cooley Ballroom is in the building titled “UNION.”