Signaling a new chapter in its study of urban systems, the Urbanization and Global Environmental Change (UGEC) project – hosted by Arizona State University’s Julie Ann Wrigley Global Institute of Sustainability – has received a significant award from the Future Earth initiative.

In this so-called Century of the City, UGEC recognizes the opportunity embedded in urban environments. Often associated with environmental ills, cities can serve as an excellent source of innovative, sustainable solutions. UGEC has dedicated over eight years to uncovering these solutions, primarily by fostering promising research collaborations in the social sciences. 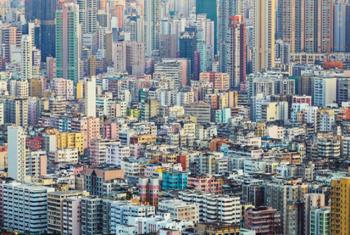 The visioning process will be guided by an Urban Transition Team, chaired by experts including Patricia Romero Lankao of the National Center for Atmospheric Research and David Simon of Royal Holloway University of London.

The team will work cooperatively with Thomas Elmqvist of the Stockholm Resilience Centre on a comprehensive workshop series. By convening practitioners from an array of disciplines, the series will articulate best practices for fostering inter- and transdisciplinary collaborations. This will enhance the effectiveness of the new project, which will be built within the Future Earth framework.

A comprehensive, edited publication is another intended outcome of the visioning process. The publication will detail the many conceptions of the term “urban,” aggregate existing knowledge on the relationship between cities and environmental change, and explore relevant developments in the scientific community.

“Understanding cities is vitally important because we now live on an urban planet,” says School of Sustainability Dean Christopher Boone, who sits on UGEC’s steering committee. “We need to figure out how to make things work in cities because if we don’t, we can’t make things work on a planetary scale.”

UGEC’s second international conference, “Urban Transitions and Transformations: Science, Synthesis and Policy,” will be held in November of this year. It will take place Taipei, Taiwan, an appropriate location as Asia contains some of the most rapidly urbanizing regions in the world.

The conference, attended by practitioners from across both the sciences and world, serves as an ideal opportunity to introduce and initiate this exciting move into the next phase of urban research.

Eight, Arizona PBS joins more than a dozen key members of the community, including leaders from nonprofits, businesses, government agencies and foundations, to help improve 21st century learning and increase high school graduation rates in Arizona for all students from preschool through college, via the public media initiative “American Graduate: Let’s Make It Happen.”

The nation’s graduation rate is at 80 percent, yet there are still significant “graduation gaps” based on race, ethnicity, family income and disabilities, as well as level of English proficiency. In Arizona, graduation rates are below the national average, at 77 percent, with the highest dropout rates in the City of Phoenix. 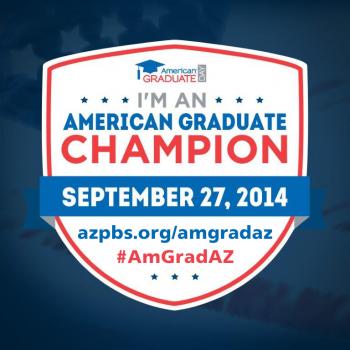 According to national research done by the University of Michigan, students who don’t graduate from high school have a lifetime earnings gap of over $300,000, and that gap extends to over a million dollars, as compared to those who complete a four-year college degree. Their report, “Analysis of Urban Schools,” by Diane Chung notes, “High school graduation is a very important, if not essential step in an individual’s life towards social and economic advancement and well-being. Individuals with higher education credentials receive higher income, are less dependent on public or government assistance, and have more stable employment (Thomas, Klemer, & Harney, 2004). Those with a higher education are also less likely to experience such societal problems as incarceration, criminal victimization, reports of ill-health, and early childbearing (Swanson, 2004).”

Eight’s goal is to raise graduation rates in Arizona to 90 percent by 2020.

“As the high school graduation rate has been historically low in Arizona, with particularly low rates among some ethnic minorities, Eight is committed to work with other community partners to help raise graduation rates among all students in Arizona,” says Kelly McCullough, Eight general manager.

The day-long program, hosted by Wes Moore, best-selling author and U.S. Army veteran, features seven hours of national and regional programming, live interviews and performances celebrating the exceptional work of individuals and groups across the country that are identified as American Graduate Champions: those helping local youth stay on track to college and career successes.

“American Graduate Day 2014” will cover topics such as Early Education, Dropout Prevention and Re-Engagement, and College and Career Readiness. The program also devotes time to important focus areas, including the special needs community and the role of the arts in STEAM as a key component that can compel kids to stay in school, reflected in programs like Exploring the Arts and VH1 Save The Music Foundation. Live musical performances will also be featured.

Via Eight’s American Graduate webpage, www.azpbs.org/amgradaz, viewers can access viewer-generated video content submitted in response to questions such as “How has your life been changed by the power of volunteering?” Throughout the day, viewers and online users in communities across the county will be invited to take an active role and become an “American Graduate Champion” for local youth by volunteering their time, talent or other resources.

Celebrities scheduled to take part in the event include:

• Andy Grammer for VH1 Save The Music

• Miral Kotb for Girls Who Code

The national public media initiative will feature locally produced content alongside national productions and classroom resources, including “PBS NewsHour’s” new education desk and the youth-driven spoken word contest RAISE UP!, along with PBS Learning Media and PBS Kids assets. Eight is part of the national American Graduate initiative in partnership with 33 other public media stations around the country.

Eight will continue highlighting local leaders who are helping communities increase graduation rates and the everyday heroes in a child’s life who are committed to improving education outcomes as “American Graduate Champions” on its Emmy award-winning public affairs program “Arizona Horizon,” and on “Horizonte,” its weekly public affairs program examining topics “through a Hispanic lens.”

Eight also presents education-related segments from “Arizona Horizon” and “Horizonte,” including segments produced specifically for the American Graduate initiative and information on initiatives within our community to help Arizona students graduate from high school, all of which can be viewed online at Eight’s dedicated webpage www.azpbs.org/amgradaz. Eight also invites the public to join the American Graduate movement on social media by using the hashtag #AmGradAZ.

Over the next two years, Eight will work to increase understanding about the challenges for at-risk youth and develop a network of community partners to help promote and illuminate long-term solutions emphasizing the importance of a strong foundation in early education and the need for the consistent presence of caring adults.

“The Phoenix metropolitan area has been identified as one of the worst areas in the country for disengaged youth. We have some of the largest numbers of youth (ages 16-24) who are not in school or employed,” said Laurie King, director of learning and communication systems for Maricopa County Education Service Agency. “MCESA is leading an effort to connect all youth service agencies around the issue of re-engagement through a series of summits. High school graduation is a major factor in employment, so the American Graduate initiative is critical in our effort to ensure all youth are engaged in school or work.”

• Valley of the Sun United Way

• SIENA & Education Outside the Box (EOTB.org)

“Education is at the core of public media’s mission. Through American Graduate stations’ partnerships with over 1,000 local organizations, we are proud of public media’s content and on-the-ground engagement that has raised awareness to achieve 80 percent graduation rates nationally, and helped America see the potential in every student,” said Pat Harrison, CPB president and CEO. “By strengthening our focus on solutions, starting with our youngest learners, and highlighting local leaders who are creating sustainable change, together, we can set kids – and our country – on a path for long-term success.”