Awakening the 'tech' in girls' brains

Fifteen-year-old Rosenda Rivera is gradually watching her Akimel O’odham language fade away. Just 8 percent of the people in her Gila River Indian Community know it and most are elderly. Rivera is producing a video that explores this language loss to raise awareness of the issue.


An hour away in downtown Phoenix, Aimee Angulo, 13, has watched girls in her community face the challenge of unplanned pregnancy. Through research, she is learning that having a baby at such a young age also presents challenges for the teens’ parents as well as the community. Using an animation program called “Scratch,” she hopes to show others how the impacts of teen pregnancy ripple outward. 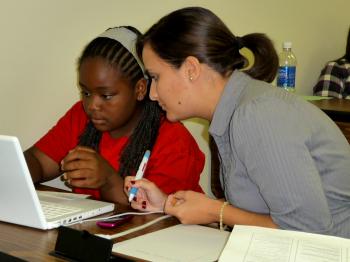 
Rivera and Angulo are participating in an innovative program, developed and led by Arizona State University Professor Kimberly Scott, which fuses learning of advanced computational skills with key areas of social justice. Called “COMPUGIRLS,”">http://sst.clas.asu.edu/compugirls/">“COMPUGIRLS,” the goal is to create aptitude and interest among adolescent girls in technology and computer science.


“Unlike most technology programs, COMPUGIRLS is very focused on having the girls identify and research a social or community issue that is important to them,” Scott said. “The technology becomes a means to that research, to analyze that issue and ultimately come up with and present a solution.”


A 2007 study by the National Science Foundation reports that only 18.6 percent of computer science bachelor’s degrees were awarded to women, and only 10 percent of middle-school girls rated the profession as a “very good” choice for them. This is despite the fact that teenage girls are now using computers and the Internet at rates similar to their male peers.


According to Scott, part of the problem is that computer science is often seen as programming, which is oftentimes boring to girls. They don’t see how technology can be used to create, discover or solve a problem.


“Girls, in general, prefer projects that are socially relevant, prefer learning by doing, and enjoy working in small collaborative teams,” she said. “This is not typically taken into consideration when designing curriculum.”


Scott, who teaches in ASU’s School">http://sst.clas.asu.edu/">School of Social Transformation in the College of Liberal Arts and Sciences, developed the program in 2007 and secured a $850,000 grant from the National Science Foundation to bring it to 60 girls in underserved school districts in the Phoenix-metro area, including at the Gila River Boys & Girls Club in Sacaton, part of the Gila River Indian Community.


The girls, who are predominantly Hispanic, Native American and African-American, can begin the program as eighth graders and participate in six distinct courses, meeting four times a week for five weeks. In addition to advancing techno-social skills, they learn to improve their writing, conduct interviews, draft proposals, and research using the Internet, as well as ASU’s online library.


As part of the program, COMPUGIRLS loans each participant a laptop, digital camera and digital camcorder. Podcasting, Teen Second Life, Sims and Scratch are a few of the applications that the girls learn throughout the program to showcase their social justice issue.


The curriculum is designed by the ASU research team in tandem with mentor-teachers from Gila River, the Phoenix and Tempe Union High School Districts, and Roosevelt Elementary School District. COMPUGIRLS is an opportunity for them to advance their skills in applied technology.


“We get intimidated by technology; they're ten steps ahead of us,” said curriculum specialist Cynthia Mruczek, a doctoral student in ASU’s educational leadership and policy program. “They are developing high-level math and computational thinking skills, and they love it because the topic is important to them and their communities. They’re more confident and interact with technology differently when there are no boys around.”


“The assumption is that boys are better, but the girls discover they are just as bright,” Ladue said. “This awakens a whole new part of their brain and makes computers cool to them. They haven’t thought it was an opportunity open to them, and then they discover they’re really good at it.”


Ericka Martinez, 14, is a quick study. She is using Scratch to bring some pretty sophisticated animation to her project on girls in juvenile detention, adding sound, music and characters to tell her story.


“It’s very new to me – using technology in a good way to convey information,” Martinez said. “It makes you think a lot because it’s not just a game, and I’m learning to be patient with technology and myself. It’s a good feeling when you can help others change their minds and opinions with something you’ve created.”


Learning to use technological skills while exploring a social issue has been an intriguing process for Davina Pratt, 14, as well. She eventually plans on going to college and majoring in a technological field or criminal justice. Her father, David Pratt, is proud of what she has learned.

Both families and students may shed a few tears as they say "goodbye." But both will be starting a grand adventure as students begin moving into campus housing at ASU.

Both families and students may shed a few tears as they say “goodbye.” But both will be starting a grand adventure as students begin moving into campus housing at ASU this weekend.

More than 13,000 students will move into the residence halls at ASU Aug. 14-17, about 10,000 of them on the Tempe campus. ASU staff and volunteers at all four campuses will hoist computers and mini-fridges from cars, helping families make the trek to their students’ rooms in a “cruise ship” style check-in.

Palo Verde Main hall will even feature a telehandler, similar to a forklift,  on Saturday, lifting belongings up two or three floors to an opening in the side of the building. This beats negotiating the stairs.

Demand for on-campus housing is strong, with most halls reaching capacity. Freshmen are expected to live on campus, and an increased number of returning students have reapplied for housing, realizing the benefits of on-campus living.

Tempe has 14 halls and three apartment complexes, divided into neighborhoods to provide academic support services and activities to help students connect with each other. Within neighborhoods, smaller living-learning communities are organized to link students by interest or major.

A record 1,200 students are expected to move into Taylor Place on the Downtown Phoenix Campus on Aug. 16, more than double the number when the campus opened two years ago. Taylor Place residents will enjoy a brand new Devil’s Den recreation center, a 2,000-square-foot space outfitted with game tables, large-screen TV sets with Blu Ray DVD players and video game consoles.

The Polytechnic campus in Mesa will welcome another 1,200 residents to its halls and family housing on Aug. 16, with spaces also made available to students enrolled in Maricopa County Community College classes. A new Global Village is opening for international students.

Freshmen at the West campus will move into Las Casas on Aug. 14 for two days of Camp Solera, an orientation and getting-to-know-you weekend. Returning students move in on Aug. 16. West campus will house about 340 students.

Check-in at the Tempe campus begins at 7 a.m. at Wells Fargo Arena all four days and features a streamlined, paperless process, as part of ASU’s commitment to sustainability. Students will have completed their forms online and will swipe their Sun Devil ID cards to receive their housing assignments on a personalized label.

The markets at the MU and HAV have been renovated to provide more fresh and healthy convenience foods, such as breakfast sandwiches, burritos, wraps, sushi and salads, as well as fresh produce, bakery and coffees. Both will provide vegetarian, vegan and gluten-free options, and will offer information about origin and nutritional value.

Classes on all campuses begin on Aug. 19. The official Sun Devil Welcome by President Michael Crow will be at 2:30 p.m. Aug. 18, at Wells Fargo Arena, followed by whitewashing the “A” on Tempe Butte.