Internationally renowned novelist and environmental activist Margaret Atwood will visit Arizona State University this November to discuss the relationship between art and science, and the importance of creative writing and imagination for addressing social and environmental challenges.

Atwood’s visit will mark the launch of the Imagination and Climate Futures Initiative, a new collaborative venture at ASU among the Rob and Melani Walton Sustainability Solutions Initiatives, the Center for Science and the Imagination and the Virginia G. Piper Center for Creative Writing. Atwood, author of the MaddAddam trilogy of novels that have become central to the emerging literary genre of climate fiction, or “CliFi,” will offer the inaugural lecture for the initiative on Nov. 5. 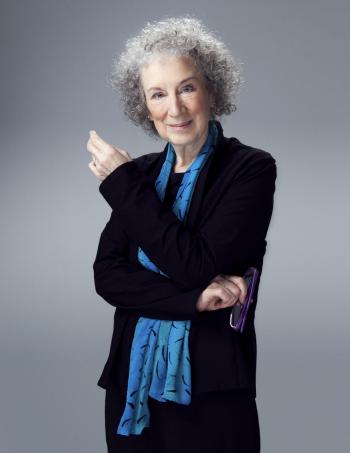 "We are proud to welcome Margaret Atwood, one of the world's most celebrated living writers, to ASU and engage her in these discussions around climate, science and creative writing,” said Jewell Parker Rhodes, founding artistic director for the Virginia G. Piper Center for Creative Writing and the Piper Endowed Chair at Arizona State University. “A poet, novelist, literary critic and essayist, Ms. Atwood epitomizes the creative and professional excellence our students aspire to achieve."

Focusing in particular on CliFi, the Imagination and Climate Futures Initiative will explore how imaginative skills can be harnessed to create solutions to climate challenges, and question whether and how creative writing can affect political decisions and behavior by influencing our social, political and scientific imagination.

“ASU is a leader in exploring how creativity and the imagination drive the arts, sciences, engineering and humanities," said Ed Finn, director of the Center for Science and the Imagination. "The Imagination and Climate Futures Initiative will use the thriving CliFi genre to ask the hard questions about our cultural relationship to climate change and offer compelling visions for sustainable futures."

The multidisciplinary Initiative will bring together researchers, artists, writers, decision-makers and the public to engage in research projects, teaching activities and events at ASU and beyond. The three ASU programs behind the Imagination and Climate Futures Initiative have a track record for academic and public engagement around innovative programs, including the Sustainability Solutions Festival; Emerge; and the Desert Nights, Rising Stars Writers Conference.

“Imagining how the future could unfold in a climatically changing world is key to making good policy and governance decisions today,” said Manjana Milkoreit, a postdoctoral fellow with the Walton Sustainability Solutions Initiatives. “We need to know more about the nature of imagination, its relationship to scientific knowledge and the effect of cultural phenomena such as CliFi on our imaginative capabilities and, ultimately, our collective ability to create a safe and prosperous future.”

For more information, please visit climateimagination.asu.edu or join the Twitter conversation at #climatefutures.

The Virginia G. Piper Center for Creative Writing is a research unit in ASU's College of Liberal Arts and Sciences.

The first official graduate of ASU's American Indian Studies master’s program, Lorena Yaiva, is one step closer to a law career this summer, as an assistant prosecutor in the Prosecutor’s Office with the Hualapai Tribe.

Lorena Yaiva took her first professional steps on the path to become a lawyer this summer. The first official graduate of Arizona State University's American Indian Studies master’s program, Yaiva now works as an assistant prosecutor in the Prosecutor’s Office with the Hualapai Tribe.

Yaiva, who is half Hopi and half Havasupai, credits ASU for making the dream of making a difference in her community a reality. “The American Indian Studies Program and faculty, and my work with the American Indian Student Support Services offered me the ability to meet new people, to learn and receive the guidance that I needed to further my education and pursue my goals,” said Yaiva. “Ultimately, I would like to address issues of domestic violence in my Havasupai and Hualapai communities and develop a juvenile diversion program to help youth and their families challenged by drug and alcohol problems.” 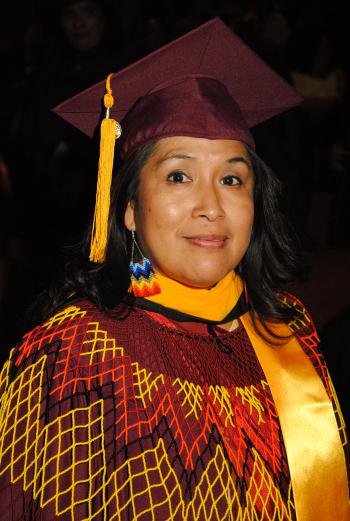 The master’s program was founded in 2010 through the work of ASU faculty, including David Martinez (Gila River Pima) and John Tippeconnic, the founding director of the program, who is of Comanche and Cherokee heritage. The collective designed the program to support students interested in Indigenous rights, social justice, language revitalization and tribal governance, and prepare them for doctoral work or professions, such as law.

“We wanted to create something that reflected the strength of our faculty and the resources of our region,” said Martinez, an associate professor and director of graduate studies. “We also saw the rich relationships that could be built with the tribes in the Valley and organizations that serve the urban Indian population in the Phoenix Metro area.”

Martinez started his own intellectual journey as part of an American Indian Studies program at the University of Minnesota. When he joined that program, it had been active for more than four decades. It struck him then how long American Indians had been writing, talking and speaking about Native rights and issues.

“Centuries of ideas, opinions, political views, responses to federal decisions about Indian peoples, pamphlets, books, articles – from those first penned in the 1700s by Mohegan activist Samson Occom to present,” said Martinez, who is also a professor with the School of Historical, Philosophical and Religious Studies at ASU. “I saw them as part of an American Indian intellectual history; one that I wanted to study as a tradition that had been bequeathed to us.”

The master's program now has 15 students, and anticipates another six students this fall. Martinez is excited to see the program, whose first cohort came exclusively from the Southwest, now attracting students outside of the region and the United States.

“We celebrate the graduation of the first students from ASU’s American Indian Studies master's program,” said Kenro Kusumi, associate dean of graduate programs in the College of Liberal Arts and Sciences and professor in the School of Life Sciences. “These students are amazing individuals who are socially embedded and are working to transform our community. We look forward to hearing about their achievements and societal impact in the future.”

For Yaiva, the greatest strengths of the ASU program were the close interactions with Native faculty, the coursework and networking, and the opportunities to work with Native undergraduates, graduate students and communities. As part of Yaiva’s practicum, she studied with professors Leo Killsback and Laura Gonzales-Macias to build a mentoring program that captured the concept of “cultural professionalism.”

“We partnered undergraduate students with graduate students to foster learning and mentoring relationships. Our hope has been to help students develop skills, such as how to do research or implement projects within tribal communities, to further their education and impact in their home communities.”

Martinez also points to the level of camaraderie that he’s seen grow in the program as significant. “I see students more active, more engaged in courses and very erstwhile to participate in conferences and community service, and very supportive of each other. Our students don't feel alone in this program or at ASU.”