On July 8, at approximately 11:26 a.m. EDT, the space shuttle Atlantis will streak skyward from the Kennedy Space Center’s launch pad 39A, for one last mission. While the STS-135 flight marks the end of the space shuttle’s glory days, its final trip may open a new era of research into infectious diseases, thanks to space bound experiments conducted by Cheryl Nickerson, and Roy Curtiss III, along with their colleagues at Arizona State University’s Biodesign Institute.

Nickerson, a microbiologist and authority on infectious pathogens, has been using spaceflight or spaceflight analogues since 1998 as an exploratory platform for investigating the processes of infection. Her provocative approach to microbial research has already paid rich dividends. In earlier experimental missions, Nickerson’s team demonstrated that conditions of microgravity present aboard the space shuttle have the potential to increase the disease-causing capacity or virulence of microbes like Salmonella – a major causative agent of food-borne illness. 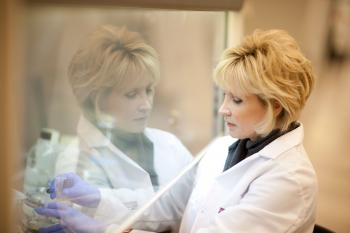 Further, her research demonstrated that spaceflight globally altered gene expression in Salmonella and other pathogens in critical ways that were not observed during culture on Earth, and were governed by a master switch regulating this response. “Our earlier work showed the potential for spaceflight to provide novel insight into the mechanisms of microbial virulence that may lead to innovations in infectious disease control here on Earth,” she said.

Curtiss, director of the Biodesign Institute’s Center for Infectious Diseases and Vaccinology, has engineered an experimental vaccine strain, which will fly aboard Atlantis on its journey to the International Space Station Laboratory.  By removing the disease-causing components of Salmonella and incorporating a key protective antigen from Streptococcus pneumoniae, Curtiss has produced a powerful oral vaccine against pneumonia, that has shown promise in phase 1 human clinical trials. The ability of spaceflight to enhance the efficacy of this recombinant attenuated Salmonella vaccine, or RASV, will be the focus of the Atlantis mission.

Current experiments aboard  STS-135 will build on decades of earlier research by Nickerson and Curtiss, in attempts to improve the effectiveness of RASVs. These vaccines exploit Salmonella’s renowned infectious capacity in order to produce a strong, system-wide immune response. In addition to the defensive response to Salmonella, the vaccine recipient also marshals an immune response to secondary disease antigens studded on the pathogen’s surface membrane—in this case, antigens to pneumococcus, the causative agent of pneumonia.

“Many breakthroughs in life sciences research and translational advancements to the healthcare setting, have been achieved through studying the response of biological systems to extreme environments,” Nickerson says. The extreme environment in the present study is the reduced gravity present during spaceflight, which alters a fundamental physical property encountered by living cells, known as fluid shear.

Fluid shear refers to the physical forces exerted on cells by the extracellular liquids surrounding them. Previous experiments by Nickerson aboard the space shuttles Endeavour and Atlantis showed that changes in fluid shear due to microgravity induced important cellular responses in pathogens, including unique alterations in gene expression and virulence.

Nickerson notes that the responses of pathogenic cells to microgravity may be closely correlated with their behavior during infection here on earth, where the effects of low fluid shear environments present in the body are believed to contribute to virulence. Such pathogen responses, however, may often evade detection in conventional in vitro experiments on earth, where gravity may be masking this effect. In the current study, this approach is being applied to Salmonella vaccines. Because RASVs can be produced against a wide variety of human and animal pathogens, the outcome of this research could influence the development of vaccines against many other diseases in addition to pneumonia.

Unlike existing anti-pneumococcal vaccines, Curtiss’ RASV may be given orally and acts to stimulate mucosal, humoral and cellular immunity, offering enhanced protection. Diseases due to Streptococcus pneumoniae include community-acquired pneumonia, otitis media, meningitis, and bacteremia, and are responsible for some 10 million fatalities per year. Pneumonia poses a particular threat to newborns and the elderly, who may fail to mount an effective immune response after receiving current anti-pneumococcal vaccines.

The current experiments planned for Atlantis’ final mission represent an interesting twist in Nickerson’s research into microbial virulence and modes of infection, which she has pursued with longtime collaborator Mark Ott, a senior microbiologist at the Johnson Space Center and a Co-Investigator on the RASV flight experiment. Again, the pathogen of choice is Salmonella, but here, the invader has been genetically re-engineered to protect from infectious disease, rather than to cause it. The outcome of this research has the potential for better protecting astronauts, who are keenly vulnerable to infection during spaceflight, as well as to help engineer better therapeutics for infectious diseases on earth.

Specially designed growth chambers containing the vaccine strain will travel with Shuttle Atlantis to the International Space Station. During spaceflight, crewmembers will activate the samples, while simultaneously, an earthbound sample will be grown under otherwise identical conditions. The spaceflight cultured RASV strain, upon its return, will be evaluated against the control sample and analyzed for its ability to protect against pneumococcal infection.

Nickerson and Curtiss hope that results from the RASV spaceflight study will offer important clues for producing a more protective anti-pneumococcal immune response, while limiting undesired side effects.

Although the space shuttle program now enters retirement, space-based research into infectious diseases and vaccinology will continue, thanks to the newly signed Space Act Agreement between the National Laboratory Office and the Biodesign Institute, which will grant routine access to the ISS for continuing research. Nickerson is enthusiastic about spaceflight research and the significant clinical potential for the current study:

"It is incredibly exciting to me that we have the opportunity to utilize spaceflight as a unique research and development platform for novel applications with potential to help fight a globally devastating disease."

Cheryl Nickerson's research was profiled in the May 2011 issue of Wired Magazine: http://www.wired.co.uk/magazine/archive/2011/05/features/space-medicines-final-frontier.

Bring your children to Family Fun Day at the ASU Art Museum Saturday, July 9, and get some good deals at the Art Museum Store.

Bring your children to Family Fun Day at the ASU Art Museum Saturday, July 9, and get some good deals at the Art Museum Store. Or, you can stop by the museum Friday, July 8, for the first day of the sale.

Merchandise at the museum will be offered at a 30 percent discount for the public, and 40 percent to ASU Art Museum members and SunCard holders.

Family Fun Day, an annual free event, will take place from 10 a.m. to 2 p.m., July 9 in conjunction with the exhibit “Words of Art.”

“Words of Art” shows how the written word can be teamed up with a variety of visual arts. Hands-on activities throughout the exhibition inspire children through reading, writing and art.

Family Fun Day features art-making projects, performances and a visit from a PBS character from Eight/KAET.