On March 20, 1911, just a few days after dedicating the Roosevelt Dam, President Theodore Roosevelt visited Tempe Normal School and spoke to the community from the steps of Old Main. In his thirteen-minute speech he presented his vision for education of children, educational training and the development of the Valley. On March 21, 2011 a reenactment of the speech was ready during a ceremony to mark the 100th anniversary.

Thomas Walsh, a graduate student in ASU’s Public History Program, read Theodore Roosevelt’s speech during a ceremony on March 21, 2011. The event was planned to mark the 100th anniversary of the speech and foreshadow next year’s Arizona centennial. Walsh located the speech in the archives in a published account by the Tempe Normal student newspaper.

Associate professor Susan Gray’s remarks gave historic context to Roosevelt’s speech. “The heart of (his) speech goes far beyond the politics of time and place,” she said. For more on Roosevelt at ASU visit http://asunews.asu.edu/20110318_roosevelt. 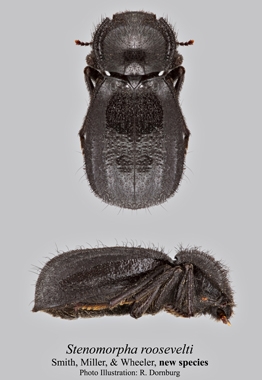 A new species of a rugged darkling beetle – Stenomorpha roosevelti – was named in honor of Theodore Roosevelt on the 100th anniversary of a speech he gave at Tempe Normal School, now Arizona State University, on March 20, 1911. The new species of beetle, covered in thick dark hair with golden setal pads on tarsal segments of legs, was discovered in the protected area of Cuatro Ciénegas, a biodiversity-rich oasis in Coahuila, Mexico. It was discovered and named by Aaron Smith, a postdoctoral research associate at ASU; Kelly Miller, an assistant professor and curator of arthropods for the Museum of Southwestern Biology at the University of New Mexico; and Quentin Wheeler, a professor and founding director of the International Institute for Species Exploration at Arizona State University.

Non-native plant species choke the ponds and stream in the Desert Arboretum Park, near Wells Fargo Arena. The park was created in the late 1990s as a research area by the late W.L. Minckley and is home to the endangered desert pupfish. For information on the clean-up of the ponds visit http://asunews.asu.edu/20110310_pupfishponds. 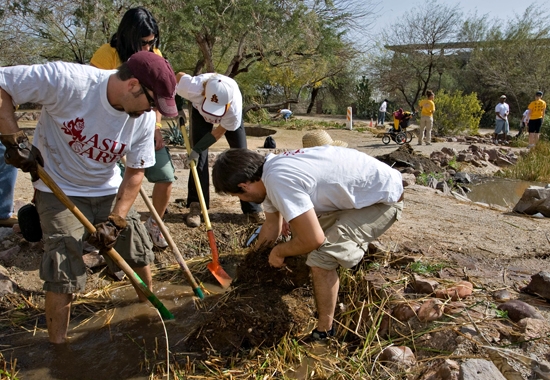 As part of the ASU Cares program, a group of stalwart alumni began the cleanup of the Desert Arboretum park on March 19. More volunteers, this time from Devils in Disguise, part of ASU’s Community Service Coalition will continue the work on the park and a number of other Valley locations on March 26. Hard at work removing thick mats of vegetation are Bill Symington, (maroon cap) Class of 1996; Alissa Pierson, in the yellow shirt and Class of ’95; Aleksandra Milas-Haren, currently a student in the College of Art and recent graduate; Ryan Spillers, Class of 2010. To volunteer for Devils in Disguise visit http://www.asu.edu/studentaffairs/mu/community/.

In Amanda Clarke's experimental volcanology lab, Kirsten Chojnicki, a Ph.D. student in geology, studies the dynamics of small explosive volcanic eruption plumes by generating analogue plumes in controlled situations. Chojnicki sets the initial conditions of the analogue eruption - the initial pressure and density of the test fluid - and then measures the internal velocity field of the plume as it grows in the observation tank. Mathematical models relate the plume growth to the initial conditions under which the plume was generated. In this way, the researchers use video records of the growth of volcanic plumes in the atmosphere to understand the initial conditions of the volcanic eruptions that generated them. To learn more about volcanology visit http://volcanology.asu.edu/.

A measured internal velocity field of a short-duration momentum-driven laboratory plume, shortly after plume initiation. The plume moves from left to right in the image and from the bottom to the top of the tank in the lab. The vectors are color coded according to their magnitude where red corresponds to the largest measured velocities. Hazards and lack of appropriate instruments currently prevent such measurements of volcanic eruption initial conditions.

Nobel laureate Elinor Ostrom holds the plaque that will be installed at the new social sciences multi-method lab named in her honor in the Cowden Family Resources Building. At a dedication of the new lab, Quentin Wheeler, ASU vice president and dean of the College of Liberal Arts and Sciences, said the lab recognizes Ostrom’s pioneering contributions to the research on collective action and the commons using multiple methods. The new lab will make it possible to teach students in the social sciences the increasing needs for using computational tools such as simulation models and social network analysis.

Author Joseph Bruchac (left) signs copies of his book "Code Talker: A Novel About the Navajo Marines of World War Two," during an event at Old Main’s Carson Ballroom. Bruchac was on campus as part of a program sponsored by ASU’s Department of English, its English Education Student Teaching program, the Labriola Center and ONEBOOKAZ.

Navajo Code Talkers Samuel Holiday, George Willie and Joe Kellwood, signed autographs as part of the ONEBOOKAZ event. Brought to Arizona in 2002, and coordinated by the Arizona State Library, Archives and Public Records, ONEBOOKAZ for Kids (and its partner program for adults) feature exciting programs that bring communities together through literature. More information http://www.onebookaz.org/

Steve Owens, assistant administrator for the Office of Chemical Safety and Pollution Prevention at the Environmental Protection Agency, delivers the keynote address at the annual conference of Jurmetrics: The Journal of Law Science and Technology. Held at the Arizona Biltmore and sponsored by the Center for Law, Science & Innovation at the Sandra Day O’Connor College of Law at ASU, in partnership with the law firm of Polsinelli Shughart PC, the Center for Nanotechnology in Society at ASU and the ABA Section of Science & Technology Law, the conference examined recent trends and challenges in regulation and risk management of nanotechnology.

Ruben Tinoco, a videographer with ASU Public Affairs, films Sparky in the Tillman Tunnel at Sun Devil Stadium. The footage will be used as part of a promotional piece to support Pat’s Run, the April 16 run in honor of ASU grad and former football star Pat Tillman. Proceeds of the event support the Pat Tillman Foundation and its Tillman Military Scholars program. Watch the video.

Ruben Ponce Wong, a third year Ph.D. student in mechanical engineering, attaches a tactile sensor to a robotic hand in Veronica Santos' biomechantronics lab at ASU's Tempe campus. Her team is developing the algorithm to control the robot hand via tactile sensing and automated grip reflexes. For more information on the project visit http://biomechatronics.engineering.asu.edu.