A collection of inspiring visions of the future has earned ASU’s Center for Science and Imagination an honor in the present.

“Hieroglyph: Stories and Visions for a Better Future,” an anthology of ambitious, technically-grounded science fiction visions of the near future curated by the center, has been honored with an award for Most Significant Futures Work by the Association of Professional Futurists. 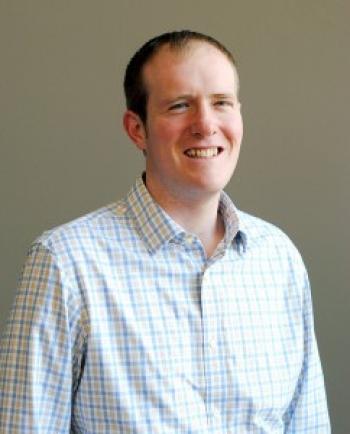 Ed Finn, director of ASU's Center for Science and the Imagination and an assistant professor in the School of Arts, Media and Engineering and the Department of English, edited “Hieroglyph: Stories and Visions for a Better Future.” Download Full Image

The award comes in the category honoring works that “illuminate the future through literary or artistic works.”

“It’s a milestone for us to see ‘Hieroglyph’ recognized not just by science fiction fans but also working futurists,” said Ed Finn, co-editor of the anthology. “Our ambition has always been to build a vibrant community dedicated to changing the world through big ideas and thoughtful optimism, and it’s tremendous to see our message reach professionals guiding strategic decision-making beyond the academy.”

“Hieroglyph,” published in 2014 by William Morrow/HarperCollins, features seventeen short stories, presenting a range of compelling possible futures based on real emerging science and technology. Top science fiction writers collaborated with scientists, engineers and other researchers in fields ranging from education and sustainability to structural engineering and space exploration to create plausible visions of the future that scientists and engineers could actually begin working on today.

The anthology features stories about a 20 kilometer steel tower that stretches into the stratosphere, a swarm of 3-D printer robots building structures on the Moon, a sustainable solar city that works like an enormous algae cell and other indelible icons of a better future.

Finn, director of the Center for Science and the Imagination and an assistant professor in the School of Arts, Media and Engineering and the Department of English, edited the book with Kathryn Cramer, an accomplished author, critic and anthologist.

Established in 2007, the Most Significant Futures Work awards honor works that advance the work of foresight and futures studies, contribute to the understanding of the future of a significant area of human endeavor or of the natural world, or present new images of the future through visual arts, films, poetry or fiction.

“Hieroglyph” shares the 2015 award for artistic and literary works with “Byologic/Zed.TO,” a real-time narrative about a viral pandemic outbreak in Toronto that integrated interactive theatrical events with online content, and “The Museum of Future Government Services,” an exhibit featuring immersive, interactive experiences of the future launched at the United Arab Emirates Government Summit 2014 in Dubai. Other nominees in the “literary and artistic works” category included Christopher Nolan’s 2014 film “Interstellar” and Stephen Baxter’s science fiction novel “Proxima.”

Former senator helps students get an 'Early Start' at ASU

The Early Start program helps incoming freshmen learn strategies for succeeding in college by connecting them with mentors, resources and classmates. Former Sen. Jon Kyl recently met with an Early Start group from the School of Politics and Global Studies.

Former senator helps students get an 'Early Start' at ASU

Jon Kyl looked at the group of incoming ASU freshmen and asked if they were optimistic about the country's future.

By a show of hands, they answered, "Yes." 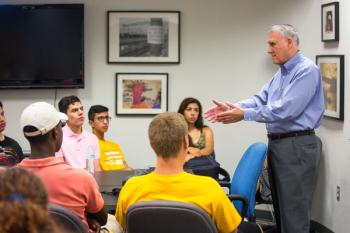 Former Sen. Jon Kyl (R-Ariz.) talks with incoming freshmen in the Early Start program of ASU’s School of Politics and Global Studies, on Friday, Aug. 7. The talk focused on questions from the students and Kyl’s experienced perspective. Download Full Image

While Kyl, the former U.S. senator from Arizona, praised their hopefulness and confidence, he also warned that future generations would have to buckle up and make the tough decisions that have been sloughed off for decades by leaders in order to restore America to its former glory.

Entitlements such as Social Security and Medicare, the nation’s surging national debt and America’s shrinking military are among the chief concerns Kyl has, and he implored students to address the problems swirling around these issues as they contemplate a future in politics.

“Our country is in danger of inheriting other generations’ failure to confront debt problems and have been deferring it for a long time,” Kyl said. “You have the opportunity to do something about it.”

Kyl met with the approximately 25 political-science majors on Aug. 7 as part of the Early Start program in ASU’s School of Politics and Global Studies. The two-week program commenced last week and helps incoming freshman learn new strategies for succeeding in college by connecting them with faculty, academic mentors, resources and new classmates. They also participate in a variety of workshops as well as social and academic activities.

“Early Start is designed to provide students the necessary tools for work at the university level and give them an idea of what kind of work and research they’ll encounter as a poli-science major,” said Richard Herrera, an associate professor in the School of Politics and Global Studies.

“It’s also an opportunity for them to meet someone like Sen. Kyl, who has advised presidents, worked on key legislation and has voted on members of the Supreme Court. We talk a lot about policymaking, but it’s also good they meet the person who actually does it. This is a moment they’ll remember.”

While Kyl covered a variety of topics ranging from the previous night’s Republican debate to the recent Iran nuclear deal, he said he wanted to also hear from students. They asked questions and shared their concerns regarding Arizona’s recent education budget cuts by the state Legislature. Kyl said the $99 million cuts were necessary for reform but believes a state-land-trust investments plan proposed by Arizona Gov. Doug Ducey will bolster public education's future.

“Arizona does not have a very big tax base, and this plan will create a comfort level for the state and cities to generate income,” Kyl said. “I think it’s a very good plan.”

He also encouraged students to dedicate themselves to their academic careers.

"Knowledge is power, and the more you know, the better you will do," Kyl said. "In my career, I took the time to know more and better prepare than the next person and it has served me well."

Freshman Corrina Williams, a recent graduate of Willow Canyon High School in Surprise, Arizona, said Kyl’s visit made a big impression on her.

“I love how straightforward he was and how he spoke from the heart,” Williams said. “He spoke with great knowledge, not as a politician hiding behind an agenda.”

Eighteen-year-old Cameron Canete, who was also in attendance, said he enrolled in Early Start because it’s a good opportunity to learn the university system and get a jump on the semester.