Public festival will cap off 3 days of enlightening entertainment, explorations into constructing the future

Engineers and dancers, scientists and actors, futurists and poets – from the region and around the world – will combine creative forces to present Arizona State University’s “Emerge 2013: The Future of Truth.” 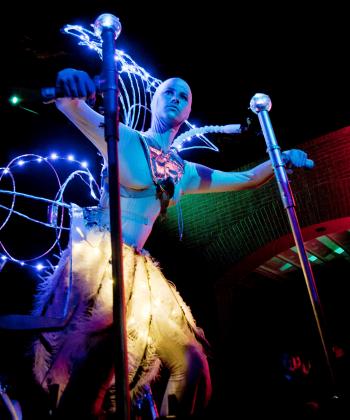 Emerge is three ambitious days of events aimed at nothing less than redesigning the future – and celebrating human ingenuity – highlighted by a free day-and-night public festival of performances, exhibits and interactive demonstrations at ASU’s Tempe campus on March 2.

Saturday evening’s attractions include Twitterverse, a theatrical social-media narrative played out in flesh and chalk, along with rock and roll bands from the Tohono O’odham Nation, a light show, a truth serum cocktail lounge, theatrical atmospheric performance works, and award-winning songwriter, bluesman, and flamenco guitarist James O’Halloran – all in or near the Neeb Plaza on campus.

Also featured will be the Arts, Media and Engineering Digital Culture Showcase and experimental sonic art performances by the Laptop Orchestra of Arizona State and the Genesis dance project. Genesis will blend art with technology, presenting a dancer covered with sensors that detect her movements and muscle activity, resulting in music synthesized in real-time, with the sensors controlling aspects of the sound.

Among Emerge day-time speakers will be:

Emerge will also present public events during the late afternoon and evening of Feb. 28 and March 1, including a play at ASU Lyceum Theatre that examines what separates – or doesn’t separate – humankind from the animal world, along with the Digital Culture Showcase and a Twitterverse presentation in Phoenix’s “The Lot: What Should Go Here?” on the northeast corner of Second and Roosevelt, two blocks east of the Arts District light rail station. For more information on the Twitterverse location, visit

As a prelude to the public events, a series of Emerge Workshops revolving around the theme “The Future of Truth” will be conducted Feb. 28 and March 1 on ASU’s Tempe campus.

Participants will strive to define new concepts of truth by engaging in everything from creating the new communal plays, songs and games of the future, to figuring out how you create a post-atrocity “truth commission” in the age of Google, Facebook and YouTube.

They’ll work at uniting traditional craft workers with state-of-the-art three-dimensional printers and explore the limits to life in the cosmos using interactive simulators. They’ll examine the stories we will tell ourselves when science fiction confronts the science facts of tomorrow.

“All of this will be done in the cause of making sense of our increasingly complex world and constructing a more robust future,” says Joel Garreau,  a co-director of Emerge and the ASU Lincoln Professor of Law, Culture and Values with the university’s Sandra Day O’Connor College of Law.

Reports from the workshops will be featured as part of the Saturday public events.

Emerge workshops are the only part of Emerge that is by invitation only. To be considered for an invitation, visit http://emerge2013.asu.edu/workshops/apply-for-a-workshop-invitation/

Emerge 2013 is sponsored by ASU’s Ira A. Fulton Schools of Engineering, the Consortium for Science, Policy and Outcomes, the Office of the President, the Center for Science and the Imagination, Project Humanities, the Herberger Institute of Design and the Arts, the School of Sustainability, the Lincoln Center for Applied Ethics, the Sandra Day O’Connor College of Law, InnovationSpace, the Virginia G. Piper Center for Creative Writing, and ASU Libraries.  Emerge is also sponsored by Intel.

Emerge, Night of the Open Door and the Engineering Open House are all part of the Arizona SciTech Festival, a series of more the 200 events that make up a state-wide celebration of science, technology, engineering, arts and math (STEAM).

Celebrate the publication of the book "Gender and Sustainability: Lessons from Asia and Latin America," which began as a research cluster at the Institute for Humanities Research.

Join us for an event that celebrates the publication of the book “Gender and Sustainability: Lessons from Asia and Latin America,” which began as a research cluster at the Institute for Humanities Research.

The book was published in November by the University of Arizona Press and deals with the struggles of women and men to negotiate such forces as global environmental change, economic development pressures, discrimination and stereotyping about the roles of women and men, and diminishing access to natural resources – not in the abstract but in everyday life. 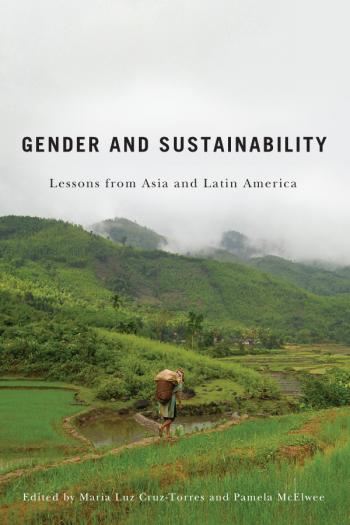 Contributors are concerned with the lived complexities of the relationship between gender and sustainability. Through rich ethnographic case studies, the book demonstrates that gender analysis offers useful insights into how a more sustainable world can be negotiated – one household and one community at a time.

The book launch will take place from 9 a.m. to noon, Feb. 22, in Social Sciences, room 109, Tempe campus. Refreshments will be provided. Click here to RSVP.

This event is cosponsored by the Institute for Humanities Research and the School of Transborder Studies. For more information, please contact the IHR at 480-965-3000 or IHR@asu.edu.