Arizona State University is among 24 colleges and universities nationwide being awarded significant grants by the U.S. Department of Education to develop and test new approaches to increase educational access and college completion rates of low-income students.

ASU received the largest award, $4 million, in the new presidential initiative titled “First in the World.” The program will include innovative educational approaches, as well as enhanced academic and co-curricular support to help students succeed. A total of 1,600 freshmen will have their progress tracked during their studies at ASU.

“The grant bolsters ASU’s reputation for innovation in higher education and addresses our mandate to increase excellence and success for college-going students,” said Jeanne Wilcox, principal investigator for the project and associate dean of research and professor at the Mary Lou Fulton Teachers College.

A key innovation will focus on creating, executing and evaluating a project-based learning approach that will allow entering ASU freshman to master competencies.

Additionally, as part of the grant, ASU is partnering with the Phoenix Union High School District to develop, implement and evaluate two complementary initiatives to facilitate success and affordability for seniors planning to attend ASU.

“This grant will further our mission of preparing every student for success in college, career and life by supporting our teachers and students and offering innovative ways to provide successful pathways to and through the university,” said Kent P. Scribner, Phoenix Union High School District superintendent. “ASU and Phoenix Union both want the same thing: more of our students having access to affordable postsecondary education – not only enrolling or transferring from community colleges, but also succeeding and completing college in greater numbers.”

Accompanying Wilcox on the grant are co-principal investigators Elizabeth D. Phillips, provost emeritus and professor of psychology in the College of Liberal Arts and Sciences; Art Blakemore, senior vice provost at the Office of University Provost; and Alfredo Artiles, associate dean of academic affairs and professor in the Teachers College.

To promote excellence, the signature ASU innovation will focus on students mastering competencies through project-based learning. The approach signifies a fundamental shift in how learning is viewed and measured, and will move students beyond merely “passing” a course to mastering knowledge and skills as demonstrated by specific learning outcomes for which they will be awarded credit for multiple courses. While a small number of students will have their progress tracked for research funded by the grant, the new curriculum will be open to any entering ASU freshman.

“Our goal is to help students develop integrated critical inquiry and problem-solving abilities that are required to be successful in the contemporary workplace, while also demonstrating an approach to increase affordability,” said Wilcox.

For example, students may have to design a sustainable food system for an urban area as part of a School of Sustainability project. During implementation, they are likely to collect and review information, come up with new ideas, conduct observations, interpret information and communicate their findings and ideas through oral or web-based presentations, or a written document.

Through their partnership, ASU and Phoenix Union High School District faculty will collaborate to promote success for the district's students who plan to attend ASU through an early start program and provision of a comprehensive system of support. The early start program includes projects that Phoenix Union High School District seniors can work on during their senior year, continue during the summer, and finish it during their first few weeks of enrollment at ASU. Students will receive up to an additional 12 credits toward degree requirement.

The comprehensive system of co-curricular support will include establishing mentoring and support networks for Phoenix Union High School District students and their parents with help from ASU students and their parents; helping students explore career paths through early access to ASU’s e-advisor system; helping them develop a sustainable financial plan to attend ASU; and helping students transition to college through a two-week summer experience that begins at their high school location and then transitions to the ASU campus they plan to join.

“The grant will allow us to examine the effectiveness of a set of innovations and associated strategies that directly respond to our priorities of increasing access and success for low-income students and closing the degree attainment gap when compared to their more advantaged peers,” Wilcox said. “Furthermore, we will have developed a template for our innovations that can be replicated at scale for ASU and also at other postsecondary institutions.”

Leaders from throughout the world came to Tempe, Arizona, to share their insights on indigenous people and sustainability.

Indigenous scholars, sustainability scientists and tribal leaders gathered in Tempe, Arizona, Oct. 6-7, to discuss and debate indigenous sustainability and environmental issues during the Arizona State Unviersity “Conference on Indigenous Sustainability: Implications for the Future of Indigenous Peoples and Native Nations.”

Leaders from throughout the world who shared their insights included Linda Tuhiwai Smith, who discussed indigenous knowledge in her keynote address – teachings that she noted are often seen as controversial when compared with knowledge presented by scientists. 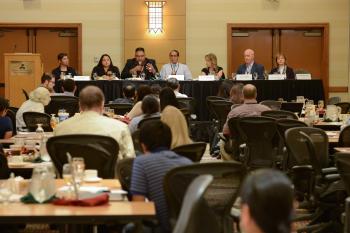 Smith, professor of education and Maori development and pro-vice chancellor at the University of Waikato, New Zealand, said that indigenous knowledge has been tested by controversy and what is forced to be revealed through the legal system, but it still persists. She has examined the relationship between indigenous knowledge and science in her research and found that it was hard to find a bridge between the two areas, except when specific areas are addressed.

“I think this is where the answer is,” Smith said. For example, when indigenous people and scientists work together on specific issues, such as saving a river, they can come up with solutions to fix problems, such as replanting with native plants and working on erosion issues.

Chischilly is a member of the Federal Advisory Committee on Climate Change and Natural Resources Science appointed by Department of Interior Secretary Sally Jewell.

The conference also featured a panel titled “Tribal Energy and the Environment.” Moderated by Fixico, the panel featured Rebecca Tsosie, Regents' Professor at ASU’s Sandra Day O’Connor College of Law; Bill Rice, associate professor of law at University of Tulsa College of Law in Oklahoma; Harvey Bryan, professor at The Design School at the Herberger Institute for Design and the Arts; and Clark Miller, associate professor at ASU’s School of Politics and Global Studies.

The panelists highlighted the importance of indigenous people’s right to self-determination and navigated the issue of sustainability of natural resources, such as energy, land and water, with the help of indigenous knowledge that has always included sustainable principles as a core philosophy.

Tsosie pointed out that law, economics and science are often presented as systems of knowledge built on “neutral” principles, when, in fact, national and international policies are clearly designed with instrumental goals in mind that sometimes work against tribal interests. Rice commented that non-indigenous people need to build stronger relationships with their resources, ones that go beyond treating resources as commodities.

Miller and Bryan stressed comprehensive, systematic approaches that reinvent educational, scientific, technological and innovation systems in a way that connects back to communities – indigenous and non-indigenous. They said that a larger conversation regarding the kinds of societies we want to live in and build in the future cannot be had if such systems are not built with communities in mind.

“We are all connected, so what we do now to build better energy and other systems will have an effect across the world,” Miller said. “Indigenous and non-indigenous people have had different perspectives on many issues, but we will have to come together, listen to each other’s perspectives and find common solutions to common problems.”

In addition to the panel on energy, discussions on native science and sustainability, the stories of traditional human knowledge, and the future of sustainability and educating the next generation sparked discussions among the audience.