ASU, Washington anthropologists to examine sustainability in deep past

Editor's Note: Arizona State University baseball will take on the University of Washington in three games May 18-20 in Tempe.  Read more about ASU's collaborations with Pac-12 schools.

Scientists across the world have come to believe that addressing the issues of future global sustainability requires looking into the deep past, not just the previous hundred years or so.

With this in mind, the National Science Foundation (NSF) has awarded millions of dollars in grants to eminent anthropologists to identify conditions that allowed people to develop sustainable relationships with the environment over a thousand years or so.

Margaret Nelson, distinguished sustainability scientist in ASU’s Global Institute of Sustainability and professor in the School of Human Evolution and Social Change, currently holds three NSF grants totaling more than $2 million to look at social and ecological resilience. She is principal investigator on a grant to discover configurations of diversity in ecological landscapes and social organizations that affect systems’ ability to cope with significant environmental or social changes.

Five archaeological cases from the southwestern United States and northern Mexico offer long-term “experiments” that allow researchers to use dynamic modeling to determine how diversity in the social and ecological realms affected these societies’ abilities to thrive.

At ASU Nelson, who is vice dean of Barrett the Honors College, leads an interdisciplinary research team addressing a range of social-ecological issues concerning resilience and sustainability for prehistoric small-scale farmers in the U.S. Southwest (600-1500 CE). The team analyzes lessons learned from this research for contemporary issues of resilience and sustainability.

She has conducted research in the Mimbres region of southwest New Mexico for over 30 years, collaborating for the past 20 years with Professor Michelle Hegmon. Nelson also includes undergraduate and graduate students in her archaeological research.

During the past decade, international funding agencies have supported research efforts focused on the long-term interaction between humans and their environments. These research studies, which track the dynamic relationships of societies and environments over 1,000 years or more, have been carried out in the southwestern United States, coastal Alaska, North Pacific and North Atlantic oceanic islands, Scottish Highlands and islands, Central America and Caribbean.

The resulting pool of data, spanning tropical to arctic latitudes, will be incorporated into a network known as the Global Long-term Human Ecodynamics Research Coordination Network through the NSF grants.

Nelson also is principal investigator for a grant to examine climate change using archaeological data from the southwestern United States and the north Atlantic islands of Iceland, Greenland and Faroes.

The American Society of Criminology announced it will present Min Xie, an assistant professor in the School of Criminology and Criminal Justice at ASU, with an award for outstanding scholarly contributions to the discipline of criminology.

Min Xie, assistant professor, will receive the 2012 Ruth Shonle Cavan Young Scholar Award this fall from the American Society of Criminology for her unprecedented work at the ASU School of Criminology and Criminal Justice. The Cavan Award recognizes outstanding contributions by scholars who earned their postgraduate degree in the past five years.

“I think this is a day in which you feel happy, but at the same time you feel humbled and honored,” said Xie.  “Because when I look at my peers, there are several people whose work I really admire and am inspired by.” 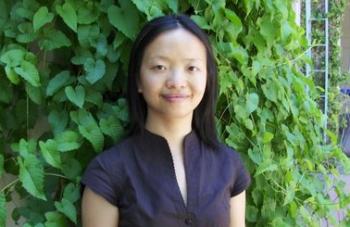 Xie has spent the first five years of her career at ASU after earning her doctorate from the School of Criminal Justice, University at Albany, SUNY.

“The list of past winners of the Cavan Award is a who's who of stars in criminology,” said Scott Decker, director of the school. “Dr. Xie joins this illustrious group, and is recognized for the high quality and impact of her work understanding patterns of victimization.”

One of Xie’s research areas delves into the impact of victimization, but goes beyond the effect on an individual and that person’s family.  Xie said she wanted to find out how victimization affected victims’ friends, their immediate neighborhood, and the community they live in. She found that victimization can lead to social instability, for instance, by causing someone to move away.

“After the victimization, people make important decisions about how to cope with it,” said Xie. “This means the whole experience of victimization is linked with all other processes that can contribute to the future of the neighborhood.”

A recent analysis of scholarly work by female criminologists ranked Xie the number one female scholar in the field when adjusted for the year in which a researcher earned a Ph.D. The study by University Texas Dallas found Xie was the sole or lead author on five articles published in elite criminal justice and criminology journals over a four year span.

“It’s a great feeling when you work with a bunch of talented young scholars in the field, including people in our department,” Xie said. “And you look at them and they work so hard – they do so much work – and sometimes, you’re just trying to keep up.”

Xie and other young scholars have helped transform the school over the past several years.  It’s grown from a small program with six professors and a few hundred students to a school with nearly 2,000 students, 25 faculty members, and a dozen lecturers, associate faculty and online faculty.

The school’s director credits the work of Xie and others as a reason why the school is quickly becoming one of the top criminology and criminal justice programs in the country.

“This award provides recognition for the quality of her work and the environment in the School to promote and support outstanding scholarship,” Decker said.

“I think in many respects it brought a level of national visibility to my work that publishing alone wouldn’t have given me,” said Pratt.