Charis Royal may be an undergraduate, but she is already conducting research that could lead to improvements in disease detection and emergency response to pandemics. 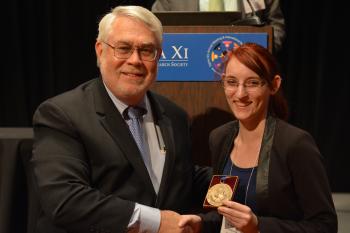 “I am looking at things like the ways in which diseases rapidly mutate and infect host cells; cellular processes that affect the expression of asymmetric carriers; and translation from infectious agent to host cells – and how to interrupt these processes,” she explains.

The anthropology and biological sciences double major recently presented at the 2014 International Research Conference held by Sigma Xi, the Scientific Research Society. More than 100 outstanding high school, undergraduate and graduate students participated in the event. Royal was ranked as one of the two top presenters in the Ecology and Evolutionary Biology category.

Royal’s research and presentation involved the analysis of the transmission characteristics of Middle East Respiratory Syndrome (MERS-CoV) in the Arabian Peninsula.

“Charis has focused on understanding similarities and differences in the epidemiology of SARS-CoV (Severe Acute Respiratory Syndrome) and MERS, two closely related coronaviruses,” notes her research adviser, Gerardo Chowell-Puente, an epidemiologist in the School of Human Evolution and Social Change in the College of Liberal Arts and Sciences.

Chowell-Puente is impressed by Royal’s productivity and the depth of her research. He says, “Her detective work could help us increase our ability to detect the emergence of MERS variants with pandemic potential.”

Royal studied case outbreaks, looking at patient histories and comorbidities. She evaluated the potential of MERS becoming a pandemic, narrowed down the most susceptible population and showed a rough estimate on what an outbreak of MERS would look like compared to the 2003 outbreak of SARS based on fatalities, health care worker incidents, gender and age.

As a child, Royal’s life was affected by serious and chronic illness that made her realize the importance of understanding how infectious diseases can impact populations.

When it came time for college, Royal chose ASU because of its multidisciplinary focus and because it houses the Institute of Human Origins and the Biodesign Institute. She appreciates the university’s emphasis on academic excellence and the hundreds of opportunities it affords in this vein.

“I plan on one day being in the first line of defense against an outbreak, to be one of the few who hit the ground running to determine what disease is spreading, how it is spreading and how to prevent it from continuing,” she says. “To me, one of the best defenses we have is to understand what we are up against, and we must continue to improve and advance how we distinguish one disease from another in order to stop the spread of preventable infectious diseases.”

The W. P. Carey Foundation honors 130 years of familial ties to Arizona State University with a $3 million gift to the Arizona Center for Law and Society, the new downtown Phoenix home of the Sandra Day O’Connor College of Law.

The W. P. Carey Foundation honors 130 years of familial ties to Arizona State University with a $3 million gift to the Arizona Center for Law and Society, the new downtown Phoenix home of the Sandra Day O’Connor College of Law. The gift is the second-largest in the history of the College of Law.

Construction on the $129 million Arizona Center for Law and Society began in July. The new building will be ready for classes by August 2016.

The W. P. Carey School of Business at ASU and the W. P. Carey Foundation are named after William Polk Carey, who helped to continue the family’s tradition of generous philanthropy.

“I am grateful to the W. P. Carey Foundation for this wonderful gift, and I am honored that we can bring the Armstrong name to the Arizona Center for Law and Society,” said Sandra Day O’Connor College of Law Dean Douglas Sylvester. “The Armstrong Great Hall will serve as an important link between ASU law’s past and its future.”

The Arizona Center for Law and Society will be designed and built around the Armstrong Great Hall. The heart and soul of the center, the hall will be a teaching-learning space reflecting the vision of its namesake and the continued success of the College of Law.

“We are proud to continue the Armstrong legacy for the benefit of future generations,” said J. Samuel Armstrong IV, John Samuel Armstrong’s great-grandson and a trustee of the W. P. Carey Foundation. “This gift from the W. P. Carey Foundation to create the Armstrong Great Hall is a symbol of two names that form one family that cares deeply about ASU becoming one of the great learning institutions.”

Chairman of the W. P. Carey Foundation, Francis J. Carey III, noted, “This gift enables us to support the legacies of our ancestors, John S. Armstrong and William Polk Carey. Bill was grateful when ASU originally named the main law school building at ASU in honor of his grandfather, John S. Armstrong, in 1968 and went on to support ASU with the establishment of the W. P. Carey School of Business in 2003.* He believed in the importance of both legal and business education as a way to enhance our country’s future. The W. P. Carey Foundation strives to continue to support his priorities, and hopes that this new building strengthens the national stature of the Sandra Day O’Connor College of Law and enhances the close working relationship between the law school and the W. P. Carey School of Business.”

The Arizona Center for Law and Society is planned to be approximately 280,000 gross square feet with two levels of underground parking. It will have 18 rooms in which classes will be regularly scheduled, including one large lecture hall dedicated to university undergraduate education. Features of the new law school include a high-tech courtroom and an active learning classroom.

The Arizona Center for Law and Society also will include space for two think tanks, multiple centers with cross-disciplinary focus and the new ASU Alumni Law Group, the first teaching law firm associated with a law school.

The lead architects on the project are Ennead Architects and Jones Studios, with DPR Construction as the lead builder.

*The School of Business was endowed by W. P. Carey in 2003 and subsequently renamed. The school was first established in 1961.