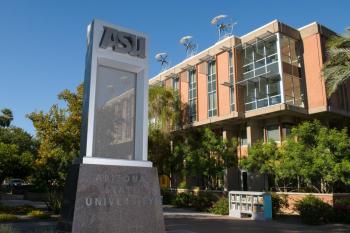 U.S. News and World Report listed Arizona State University at the top of “most innovative schools” list in the newly released U.S. News & World Report college rankings for 2016. ASU's Wrigley Hall, pictured, is home to some of that innovation as it houses the School for Sustainability. Download Full Image

“Most innovative” is a new category for the widely touted set of annual rankings by the news magazine, which compares more than 1,500 institutions on a variety of metrics.

ASU topped the list based on a survey of peers. College presidents, provosts and admissions deans around the country nominated up to 10 colleges or universities that are making the most innovative improvements to curriculum, faculty, students, campus life, technology or facilities.

Though, it’s not just college officials who are noticing ASU’s innovative atmosphere.

“ASU provided us with so many opportunities to excel in entrepreneurship and other projects,” said Jared Schoepf, who was on a team of undergraduates who launched a startup called SafeSipp, which designed and produces water-purifying devices for developing countries.

“We went to several competitions and we realized that ASU gave us that upper edge to compete.”

After ASU, the four most innovative universities were Stanford, Massachusetts Institute of Technology, University of Maryland – Baltimore County, Georgia State. Half of the 28 universities on the list, like ASU, are public.

ASU has launched several unique programs in the past few years, including several focused on widening access to higher education, which is a mission of University President Michael Crow.

Last year the school announced the Starbucks College Achievement Plan, a partnership with the coffee company that offers full tuition reimbursement to Starbucks employees who pursue an online degree through ASU. And this fall saw the debut of ASU’s Global Freshman Academy, in which students can take online classes and decide after completion whether they want to pay for the credits, which are offered at a rate of $200 per hour.

ASU is also exploring better ways to teach. Several hundred freshmen are participating in a new project-based learning pilot this year called ProMod. The program combines instruction in general education and students’ focused areas of study while they tackle real life problems. Faculty are researching whether the students are more likely to complete their degrees than students who take classes delivered in the traditional way.

Sometimes innovation comes in the form of foresight.

The W.P. Carey School of Business, which maintained its top-30 ranking for undergraduate business schools in the magazine’s listings, was among the first to create a master’s of science in business analytics, in which graduates learn how to harness the power of massive amounts of data. The program, which was started in response to industry demand, has tripled its enrollment in the two years it’s been offered.

“Ranking in the top 30 for the past decade is a testament to the ability of faculty and staff to focus on individual student attention and program excellence at the same time,” said Amy Hillman, dean of the W. P. Carey School of Business.

For students, the approach to innovation can be both academic and practical.

“It’s spectacular what they allowed us to do,” said Schoepf, who is now pursuing his doctorate in chemical engineering at ASU.

Schoepf and his team launched their product as part of the Engineering Projects in Community Service program at the Ira A. Fulton Schools of Engineering.  He said they won several grants totaling more than $50,000 to launch their product, including rent-free manufacturing space provided by ASU.

Among the other U.S. News and World Report rankings, ASU was 8th in “best online programs” and 16th for faculty commitment to teaching undergraduates. ASU also appeared on a list of 92 universities touted as being “A+ schools for B students,” where “nonsuperstars” can thrive. That list was presented alphabetically, not ranked.

But creating a culture of innovation is more than starting separate programs across the university.

“You do need to create a sustainability of innovation across the breadth of the university - a little pocket here and a little pocket there just doesn’t do it,” said Dave Guston, founding director of ASU’s new School for the Future of Innovation in Society.

He credits President Crow with fostering a foundation for innovation.

“The faculty members feel very comfortable crossing boundaries and engaging in collaborations that at other institutions would be treated with something between indifference and hostility.”

Guston said that culture of innovation has helped recruit faculty to ASU.

“Basically, the faculty we’ve brought into the new school are coming specifically to do things they felt they were not able to do at their home institutions.”

On Sept. 8, ASU President Michael Crow and ASU officially launched the me3 application at the SkySong Innovation Center. Through a simple online game, me3 pairs students with college majors and gives them insight on what academic path will get them there.

For ASU President Michael Crow, broadening the pipeline of students who attend college is a personal issue.  Reflecting on his years in high school, Crow lamented that he often lacked the guidance to help connect his experiences to a college education.

“I was a kid of unbelievable energy, who worked really hard and wanted to go to college,” Crow said. “I would’ve literally died to have a program like this, something to give me advice.” 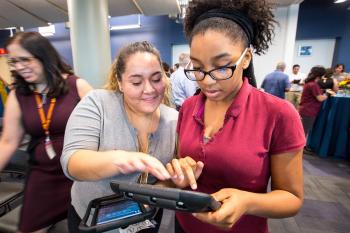 ASU Preparatory Academy seniors Genessis Enriquez (left), 17, and Brooklynn Ingram, 17, look over the me3 college recommendations on an iPad at the online game's official launch Sept. 8 at SkySong Innovation Center in Scottsdale. Enriquez is interested in medical studies, technology or engineering, and Ingram is interested in pursuing a career in health, business, science or food — though she said the me3 game encouraged her to think outside her comfort zone. Photo by: Charlie Leight/ASU News Download Full Image

On Sept. 8, Crow and Arizona State University officially launched the me3 application at the SkySong Innovation Center in Scottsdale. Through a simple online game, me3 pairs students with college majors and gives them insight on what academic path will get them there.

“Me3 is a game to help you find a pathway to college,” Crow said.

Beginning the conversation about college early in high school is important, especially for students who would be the first in their families to attend college but might not be aware of the admission requirements.

In the short me3 game, students choose from a pair of images, which helps the program understand their interests. Based on those interests, me3 recommends several career paths and the most applicable college major.  It then suggests a list of high school courses a student should take and tracks their academic progress. By charting an academic pathway through high school, me3 ensures students complete all requirements to gain admission to college.

Brooklynn Ingram, a senior at ASU Preparatory Academy, got recommendations for careers in engineering and agricultural sciences after playing the me3 game.  Although she hadn’t initially seen herself in either career, she enjoyed learning about both choices and praised the tool for encouraging her to think outside of her comfort zone.

“Once you get your career option, you start to envision yourself in that field,” said Ingram.  “It’s fun to imagine yourself doing the job.”

For guidance counselors like Debbie McKintosh, who works in the Tolleson Union High School District, Ingram’s comments highlight how me3 can be a valuable classroom tool.

“Many students don’t know what questions to ask and what opportunities are available,” McKintosh said.  “It’s not something that many of them get exposed to in their families, but me3 exposes students to these opportunities.

“Me3 changes to conversation to, ‘Yes, I can do this and I want to do this.’ I’m excited to see how me3 helps all students.”

The me3 game can be accessed at https://yourfuture.asu.edu/me3.