ASU team searching for signs of life in the stars

For centuries, humans have sought to learn whether life exists beyond Earth. That answer is closer than ever to fulfillment, and an ASU team is working on a key part of that quest with NASA’s backing.

Thousands of exoplanets (planets around other stars) have been discovered in the past decade, and the next decade likely will bring advances in detecting possible signs of life. One way of doing that is looking at the atmospheric makeup of these planets: Do oxygen or methane – gases that on Earth arise from the action of life – exist there, and are they in fact indicative of life? 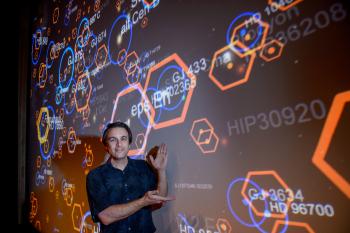 “In the field of exoplanets, finding exoplanets that could host life is no longer the goal. The quest is to find the signatures of life,” said Steve Desch, an associate professor in the School of Earth and Space Exploration. “To do that we need to know for which types of exoplanets are oxygen and methane biosignatures, as opposed to natural geochemical outcomes.

“ASU’s strengths lie in bringing together experts across astronomy and geology to answer just these sorts of interdisciplinary questions.”

Desch is principal investigator of an ASU-centered team that is one of 16 teams funded by a new NASA research coordination network, the Nexus for Exoplanet System Science (NExSS). It will receive $6.1 million over five years to investigate the connections between exoplanets and the compositions of their host stars, and especially to focus on understanding the geochemical cycles on exoplanets with different chemical compositions.

NASA’s new network is part of its Astrobiology program. NExSS includes planetary scientists, astrophysicists and heliophysicists who will carry out research to help NASA define future space missions, determine target selection and craft observing strategies, to aid in the characterization of exoplanets and the search for life on them. It is distinct from the NASA Astrobiology Institute, the program that has previously funded astrobiology research at ASU as far back as 1998.

Under the direction of Desch, the present research team brings geophysicists, petrologists and geochemists into the fold of exoplanet research, which has so far been dominated by the astrophysicists and astronomers who discover and characterize exoplanets.

Broad collaborations across disciplines, like the one to be carried out at ASU, are relatively new in the rapidly changing field of exoplanets.

“When I started graduate school a little over 20 years ago,” Desch said, “no exoplanets were known. Today, we know of thousands, with about a dozen orbiting within their star’s habitable zones. … Twenty years from now, we could be talking about known planets with evidence of life. The pace of discovery leaves me in awe.”

Just as the Kepler mission found thousands of exoplanets that transit their host stars (pass between us and the star), NASA’s Transiting Exoplanet Survey Satellite will be launched in 2017 with the hopes of discovering thousands more among the closest stars. The James Webb Space Telescope, to be launched in 2018, will measure the infrared spectrum of starlight that passes through the atmospheres of some of these transiting exoplanets, discerning what gases are present.

“Absorption of starlight by oxygen and methane could be detected by space telescopes, and will be looked for, because on Earth they are produced overwhelmingly by life,” Desch said. “But exoplanets won’t be like Earth. Stars have different chemical abundances, and their planets should, too.

“On a planet with different chemistry, it may be methane is produced naturally by water-rock interactions, or oxygen is produced abiotically. To judge whether these are valid biosignature gases, we have to understand the geochemical cycles on exoplanets with compositions different from Earth’s.”

The ASU team is centered in the School of Earth and Space Exploration, an academic unit in ASU’s College of Liberal Arts and Sciences, but also involves several faculty members from other college units including the School of Life Sciences, the Department of Chemistry and Biochemistry, and the Beyond Center. The team also includes researchers from partner institutions, including the American Museum of Natural History; the Global Science Institute in Wisconsin; Johns Hopkins University; Northern Arizona University; San Francisco State University; the University of Rochester; and the University of Washington.

ASU students across all campuses are being asked to "Ditch the Dumpster" by donating their unwanted items from campus residence halls instead of throwing them away.

Arizona State University students across all campuses are being asked to “Ditch the Dumpster” by donating their unwanted items from campus residence halls instead of throwing them away.

The event kicks off on April 22 for Earth Day and continues through May 10. Sun Devils have participated in the donation event every year since 2008. 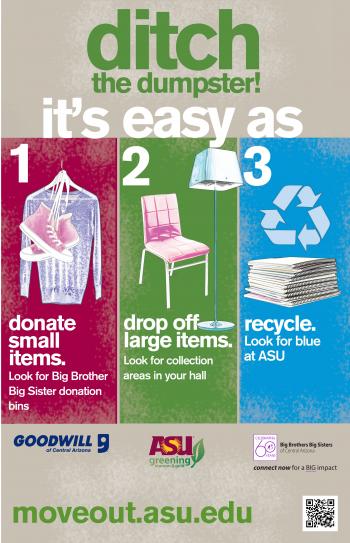 Donated and recyclable items not only are distributed to area children and families via community partners and local non-profits, but also are diverted from area landfills.

Ditch the Dumpster collaboration among ASU and community partners includes:

“Goodwill returns as a standout community partner this year, and we also will work with Big Brothers Big Sisters,” said Alana Levine, ASU Recycling Program manager. “Both organizations support our mission to divert waste from the landfill and support local children and families who can benefit from household and clothing items our students no longer need.”

Students can clean out their residence halls and deliver most items to Big Brothers Big Sisters collection boxes. Larger, unwanted items can be brought to locations across all four ASU campuses. Items accepted during the Ditch the Dumpster event include:

“We hope to exceed the 156,860 pounds of stuff that was donated, repurposed or recycled last year,” said Katie Schumacher, ASU Recycling Program technician. “Everyone is asked to fill blue bins with all other types of recyclable materials.”

For a list of drop-off locations, visit moveout.asu.edu and look for “donation locations.” Visit recycle.asu.edu for lists of recyclable items and email ASU Recycling program staff with all Ditch the Dumpster and recycling questions.