ASU team gets ready to compete in Solar Decathlon

A team of students and faculty from Arizona State University and the University of New Mexico (UNM) is set to participate in the 2013 U.S. Department of Energy’s Solar Decathlon. The international competition challenges student teams from institutions of higher education to design, construct and operate solar-powered houses that are functional, energy efficient and attractive. 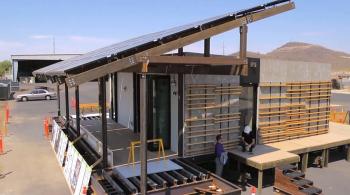 The ASU team is comprised of 26 faculty members and current and former students from The Design School in the Herberger Institute for Design and the Arts, the Ira A. Fulton Schools of Engineering and the Global Institute of Sustainability.

Named ASUNM, the team is one of only 20 from across the globe selected to compete in the biennial event, which takes place Oct. 3-13 at the Orange County Great Park in Irvine, Calif.

The team’s project, named SHADE – Solar Homes Adapting for Desert Equilibrium – is an adaptable 800-square-feet living space powered by solar panels and designed for an older, active couple living in a Southwest desert environment. The house features multiple patios to merge indoor and outdoor areas and create a fluid, expansive living space that can meet the changing needs of its occupants.

Philip Horton, a lecturer at The Design School and the team’s architectural faculty mentor, says that participating in the Solar Decathlon will always be a source of pride for the student team.

“I have seen the students respond to a host of challenges, such as budgetary struggles, tight deadlines, and working in extreme summer heat,” Horton remarks. “But seeing how proud the students are to show off the product of their efforts – the SHADE house – has been the greatest reward.”

“Building a house from the ground up to meet specific requirements is no easy feat, but we’ve done it as a team,” Taqi says. “After an initial display, the house is now being reassembled in California where we will demonstrate its uniqueness and energy efficiency.”

John Cribbs, the architecture manager for the SHADE project who is pursuing his graduate degree at ASU, says the structure is a living laboratory focused on sustainable building principles, resource usage, and energy generation and management. He says the symbiotic relationship between the Mesquite tree and a young saguaro cactus inspired SHADE’s design.

“Placing the solar canopy at a fixed angle on top of the exterior patio instead of the roof allowed us to create and shade the space below it,” says Cribbs. “Another innovative feature of the house is the use of rain-screen cladding system – a form of double-layered construction system that uses an outer layer to function as skin that vents hot air and an inner layer that reduces energy losses. We also used a type of framing system that creates more space for insulation.”

To develop SHADE as a flexible living space, the ASUNM team focused efforts on building the house as a mosaic of modules that can be plugged onto the main structure as needed. The modules also allow the house to be versatile in its functions.

“The home is adaptable, self-sustaining and can serve as a communal gathering space if needed,” says Jessica Purcell, an architecture graduate student and member of the team’s interior design, architecture and construction units. “The flex-space, which is a large living room, can be turned into a bedroom at night and an office during the day. It can also serve as an extension for living and dining rooms.”

Kevin Christensen, Purcell’s teammate and an alum of the architecture graduate program, says the flexibility of the exterior decking allows the home to become one with its surroundings.

“Using living technologies as part of a sustainable infrastructure helps cool the house through passive solar gain and shading,” he says. “An example is a custom green screen that is fitted to the west and south facades of the structure that reduces absorption of heat. These strategies increase flexibility, comfort and the residents’ engagement with their neighbors.”

Ali Abbaszadegan, the landscape architect for the team who is pursuing his master’s degree at ASU, notes that plant materials for the landscape are native to the Sonoran and Chihuahuan deserts and require minimal water. He says the landscape design for the home can be used as an interpretive garden to help educate the public about the diversity and beauty of desert environments.

The SHADE house also features a hummingbird and butterfly garden, inviting fauna that helps pollinate and shape a complete ecosystem. The landscape will be watered with the help of a gravity-fed hose using collected rainwater from a storage tank.

The process will allow the homeowner “to engage and understand the biodiversity within their garden while also maintaining it,” Abbaszadegan explains. “We also want to mitigate energy consumption and enhance other systems in the space to be more sustainable and aesthetically pleasing.”

The group handled preconstruction logistics and determined what materials would be most effective for the home’s structural foundation and framework. They were also instrumental in determining how – and at what size – the structure could be built so that it could be efficiently disassembled for transport to the Solar Decathlon event in California, and then reassembled.

The team got guidance on the design and installation of the home’s solar-energy system from engineers working with the Quantum Energy and Sustainable Solar Technologies (QESST) engineering research center headquartered at ASU.

“Being in the Southwest, we recognize that there are a lot of common challenges to building a sustainable home,” says Matthew Fraser, executive director of QESST, a senior sustainability scientist at the Global Institute for Sustainability and one of the team’s faculty mentors. “We have a combination of architectural approaches and engineering approaches that make this house suitable for the urban Southwest.”

QESST is a multi-university collaboration sponsored by the National Science Foundation and Department of Energy that is working to advance photovoltaic technology as a tool for generating energy from sunlight. UNM is one of the QESST center’s partners.

The Solar Decathlon competition is open to visitors each Thursday through Sunday during the 11-day event. For more information, visit solardecathlon.gov.

After the event, the SHADE home is scheduled to be on display at UNM for several months before being brought back to Arizona. The structure will be put on public exhibit in central Phoenix as part of the city of Phoenix PHX Renews sustainable living project.

McLendon a finalist for faculty, staff's 'Most Spirited Sun Devil'

This past Saturday at the ASU vs. USC game, Michael McLendon was named the third finalist to compete for faculty, staff's "Most Spirited Sun Devil" award.

McLendon a finalist for faculty, staff's 'Most Spirited Sun Devil'

This past Saturday, as ASU took on the University of Southern California at Sun Devil Stadium, Michael McLendon was there, as usual, clad in his best maroon for the Maroon Monsoon Game. This game was a bit different for McLendon, though; instead of staying in the crowd during halftime, he headed to the 50-yard line, where he was announced as the third finalist to join the running for ASU faculty and staff’s “Most Spirited Sun Devil.”

McLendon was born with Sun Devil pride – literally. In 1970, his mother was induced to ensure that both his family and the doctor could make it to that year’s Territorial Cup game, which resulted in the Devils' 10-6 victory over U of A and an undefeated season. 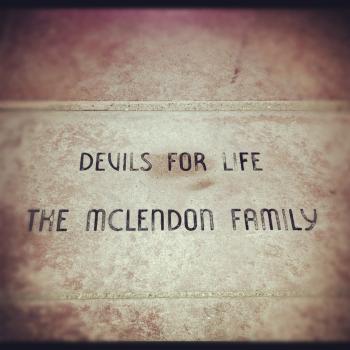 For the past eight years, McLendon has served ASU as a business operations manager for the School of History, Philosophy and Religious Studies, as well as an example of a tried-and-true Devil.

Congratulations Michael, and thank you for being a great example of Sun Devil spirit!

To learn more about this die-hard Devil, check out our Q&A with him, below.

Q: How do you show your Sun Devil spirit?

A: From my daily wardrobe of always wearing something ASU, I take great pride in being a staff member and promoting everything ASU. My office represents my spirit and pride with all things ASU, topped off with a Pat Tillman Rose Bowl jersey that overlooks “A” mountain from my office window. Tried-and-true, I am a Sun Devil through and through.

Q: Why do you love being a Sun Devil?

A: ASU is my home away from home and it’s important to show pride in what you believe in. ASU is an amazing place to be! My dedication and pride grow every day.

Q: What is your favorite ASU tradition?

A: I love them all, from attending Camp Tontozona in the summer, to hosting tailgates in the fall and then becoming an “herbivore” in the winter, to celebrating Pat’s Run and the road to Omaha in the spring, I represent a true Sun Devil.

Q: What ASU event/s do you most look forward to?

A: ASU hosts so many events throughout the year, from athletics to academics and everything else in between, it’s really hard to choose. Sun Devil Football has always been the crown jewel for my family, as it brings together so many other families that share in the Sun Devil pride and tradition.

Q: What is your fondest ASU memory?

Q: What makes you the Most Spirited Sun Devil?

A: I “speak victory” every day and share my passion on Facebook and Twitter (SDVL1). I think I have the heart, the character and the loyalty to be the "Most Spirited Sun Devil."

A: Maroon AND Gold. There are no substitutes.

A: It is an honor to be selected as a finalist for the "Most Spirited Sun Devil," something that is second nature to me. I hope to engage others outside and within the Sun Devil nation that share the same pride and passion for what is truly a great university.