Overweight young people are more likely to be rejected as friends by peers who are of normal weight, according to new research by Arizona State University social scientists.

“Using Social Network Analysis to Clarify the Role of Obesity in Adolescent Friend Selection,” published in the American Journal of Public Health by Arizona State University associate professors David R. Schaefer of the School of Human Evolution and Social Change and Sandra D. Simpkins of the T. Denny Sanford School of Social and Family Dynamics, incorporated knowledge of how complex social and biological relations contribute to friendship behavior.

Young people are also more likely to socially marginalize those who are overweight. As a consequence, overweight youth have one fewer friend, on average, than normal weight young people.

“This is especially troubling since friendships are important sources of support and companionship,” Simpkins said. “Not having or losing friends is associated with higher depression and lower self-worth for young people, which could exacerbate the health problems associated with being overweight.”

The influence of not having friends or being shunned because of extra weight can be especially difficult during formative teen years.

“Negative repercussions of not having friends may be more pronounced in middle- and high-school when intimacy and fitting into peer groups is critical,” Schaefer said.

Researchers analyzed data for the study from the National Longitudinal Study of Adolescent Health that surveyed 58,987 students in 88 middle and high schools. The average age of the multiracial survey sample was 15 and 51 percent were female. Approximately 20 percent of students surveyed provided body mass index data. Students who participated in the study identified their 10 closest friends, five of whom were female and five who were male.

Researchers utilized social network analysis in the study in order to account for different types of friend selection processes, such as attraction based on similarities, meeting during extracurricular activities, or meeting through a mutual friend. This allowed the researchers to isolate the effect of weight status on friend selection.

“Long-term implications of the study include considering ramifications of social marginalization for prevention and intervention strategies that support the emotional development of overweight youth,” Simpkins said.

The School of Human Evolution and Social Change and T. Denny Sanford School of Social and Family Dynamics are academic units in ASU's College of Liberal Arts and Sciences.

Andres Neal is getting his bachelor's degree in engineering with a mechanical systems focus, an accomplishment he could not imagine as a kid living in a paper shack in Mexico.

At 7, Andres Neal was selling gum on the street in Mexico to help get food for his family. This month, he’ll graduate from the College of Technology and Innovation, earning a bachelor's degree in engineering with a mechanical systems focus.

Along the way, he has learned how to learn from failure, how random acts of kindness can alter your life path, and how, even from very humble beginnings, you can emerge with joy. 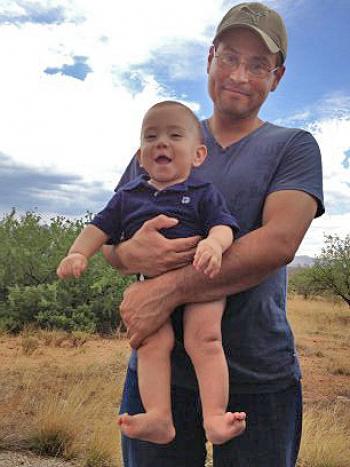 “You learn to value what you have,” Neal said. “Things don’t bother me. People expect me to be upset about some things. I believe you need to learn to have fun in life.”

As one of six children being raised by a single mother, Neal had to think fast and work hard. He had to be independent and to make things from nothing.

“I’m surprised how I managed,” said Neal, whose given name was Martinez.

Neal spent his early life in the Mexican Mormon settlement Colonia Dublan, where he said he developed a strong work ethic.

“They gave me really good values,” Neal said. “I learned that whatever you’re doing, you should do your best. I still use that every day.”

His mother had been a teacher, but lost her job because she began to lose her sight.

“We were really poor,” Neal said. “She got a job packing fruit.”

Neal and his siblings had to help out if they wanted to eat, so he sold gum and newspapers on the street and swept sidewalks.

“My mother bought rubber tubing at a hardware store and we made slingshots out of mesquite branches and pieces of leather from old boots,” Neal said. “My brother and I would hunt pigeons at the abandoned mills. That was our meat.”

They also collected spilled grain and soybeans by the railroad tracks.

“Sometimes, we ate beans for a week.”

At 14, when they left the Mormon colony for Agua Prieta, Neal was shocked at the corruption and vicious nature of life on the street.

“We were living in a house made of cardboard with black paper on the outside,” Neal said. “Someone stole the gas tank we used to cook food. But we were more scared of the police, so we didn’t report it.”

One of his brothers left home, headed for the United States, and lost track of the family. Six years later, he found Neal and brought him to South Dakota, where he was living with his new wife.

“It was a whole different world,” Neal said. “I didn’t know English. I couldn’t speak to my sister-in-law. Not a word.”

Neal attended 10th grade in South Dakota, then went to El Paso, Texas, where his mother had moved, for grades 11 and 12.

He was a good student, always on the honor roll.

“In South Dakota, I had nothing to do, so I read books,” he said. “I had a very good mind. I could memorize word for word. I can’t do that anymore.”

Neal graduated from high school in El Paso, but because he was in the country illegally he couldn’t apply to a university. He got a driver’s license and signed up at New Mexico State Community College. His mother married a man Neal didn’t get along with, and he started staying with friends and mowing lawns for money.

One weekend, he met the Neals, who had two children in high school. They took him in and made him part of their family.

“That’s when I learned to live,” Neal said. “Until then, I was in survival mode.”

Neal was too old to be adopted, but the Neals paid for attorneys to help him with his citizenship.

Eventually, Neal took the family name, married his high school sweetheart, and began taking classes at New Mexico State. When his wife graduated and got a job offer in Arizona, they moved. Neal, who had worked as a mechanic, got a job at AutoZone, applied to Arizona State University, and was admitted, planning to take classes on the Tempe campus.

Then Mark Henderson, a professor of engineering in the College of Technology and Innovation at ASU's Polytechnic campus, walked into AutoZone to buy a gasket for his car.

“I saw the parking permit hanging from his rear-view mirror, and told him I was coming to ASU,” Neal said.

Henderson convinced Neal to visit the Poly campus, telling him he would learn the theory of mechanical engineering and how to apply it, starting with LEGO bricks and robots. Neal signed on, learning to build and fly rockets, calculating crosswinds and payloads.

His most challenging project was how to remove fluid used in the manufacture of microprocessors, which required the team of five students to calculate differential equations.

"They have these glass walls you can write on like blackboards,” Neal said. “We would fill up walls with our calculations on simulated flow. One of us would think we had a good working equation. We’d build a prototype, print a test, and 99 percent of the time, it wouldn’t work.

“We completely failed. The first test was the best. With each change, our outcomes got progressively worse.”

Neal also worked on a project through ASU’s Global Resolve program to find ways for villagers in Trinidad and Tobago to use coconut oil to run their farm machines.

“I had been using waste oil to run my car for years, so professor Henderson asked me to work on the project,” Neal said. “We failed. We killed the engine. Coconut oil won’t work. It gels at 75 degrees, even if you remove the glycerin.”

Neal is not yet sure where he will go from here. He has had several second interviews, and executives are impressed with all the hands-on experience he has gotten.

“I tell them about my senior capstone project, that I’ve worked on more than one project a semester, how I’ve worked in the wind tunnel built by students,” Neal said. “Students from other universities have worked on one project. It has made me realize how different my education has been, and how it makes me stand out.”

He and his wife, Janette, have a one-year-old son, John. They bought an “unlivable” house that Neal has redone from the studs, installing tile and wood flooring and new kitchen and bathrooms. He learned how to install air conditioning.

“It’s like a pie,” Neal said of the project. “You don’t eat the whole thing at once. You start by eating one piece at a time.”

Neal is looking forward with confidence. He knows he will find his place.