Why does wartime rape vary both within and across conflicts? What role have religious leaders played in peacebuilding efforts in Latin America? How can we improve our understanding of the differences between religious and ethnic factors in conflicts around the world? 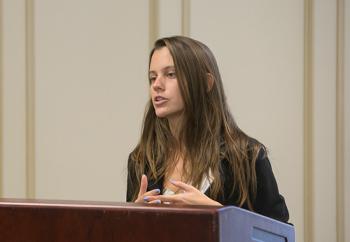 The Center for the Study of Religion and Conflict recently hosted its annual student luncheon to celebrate these award recipients, and to acknowledge the incredible work of ASU students who are investigating the complex dynamics between religion and conflict.

“Through our research awards, the center has an opportunity to help students travel around the world and work on a diverse range of projects,” says Linell Cady, director of the center and professor of religious studies.

“These scholarships are made possible by the generous donations we receive from private individuals who are committed to advancing the center’s research and education programs.”

The 2014 winners of the Friends of the Center awards include one undergraduate: Emily Fritcke; and three graduate students: Lucia Cash, A.J. Simmons and Holly Williamson.

Fritcke and Cash’s research projects both focus on the religious dynamics of countries that have experienced major political shifts.

Fritcke, an honors student in Barrett, the Honors College, is double-majoring in English literature and history. She will spend part of her summer in Romania with Ileana Orlich, professor of Romanian studies and comparative literature and director of the Romanian program at ASU. Fritcke will examine the conflict between the Orthodox Church and Greek Catholics of eastern Romania, and she will have the opportunity to visit historic sites and engage with experts on her research.

Cash, a doctoral student in religious studies, is working on a project that examines the role of Uruguayan religious leaders during the country’s period of dictatorship and its transition to democratic rule. Even though over half of Uruguay’s population is Christian, it is the most secular country in Latin America. Because of this, few people have studied the period of the Uruguayan dictatorship in relation to the country’s religious institutions. Cash is using her award to travel to Uruguay for two months to collect research materials from public libraries and other sources only available in Uruguay.

The two other award recipients, Williamson and Simmons, are both doctoral students in ASU’s School of Politics and Global Studies. Each of them is conducting research about religious and ethnic factors in modern conflicts.

Williamson is using her award to spend three weeks in Bosnia. She will conduct interviews with religious organizations, NGOs, local experts, community members and combatants involved in the Bosnian war in order to develop an understanding of the nature and effects of wartime rape. More specifically, she will explore how religious, ethnic and national identities have been mobilized in military operations to justify rape. In doing this, she hopes to conduct some of the research that is needed to understand how these identities may have been invoked to unify combatants to justify rape as a military strategy.

Simmons’ project builds on literature concerning the origins and dynamics of religious and ethnic conflict by investigating differences in their duration and intensity. He hopes to expand understandings of the systematic differences between religious and ethnic factors. Improving these types of data could help people more effectively manage conflicts by focusing on the issues that matter most in different disputes.

Each of the award winners will report back to the center in the fall with reflections on their summer research and the future of their projects.

In addition to presenting the 2014 Friends of the Center research scholarships at the awards lunch, the center also recognized students who completed the 2013-14 undergraduate research fellows program and those who were awarded the 2013-2014 certificates in religion and conflict.

Barrett, The Honors College Center for the Study of Religion and Conflict Research

High school students from across the globe received funding from ASU's Walton Sustainability Solutions Initiatives for their solutions to climate, health and energy challenges.

Imagine 1,700 high school students from more than 70 countries presenting their world-saving cures, methods, products or revelations to hundreds of scientists, professionals, professors and judges in one place. That’s exactly what happens at the Intel International Science and Engineering Fair (ISEF), held this year in Los Angeles, May 11-16.

The students competed for more than $5 million in scholarships and prizes. Arizona State University’s Rob and Melani Walton Sustainability Solutions Initiatives honored Lewis Nitschinsk from Australia, Hans Pande from Utah, Shreya Nandy and Kopal Gupta from India, and Naveena Bontha from Washington each with a $2,500 ASU Sustainability Solutions Award for their projects that break academic boundaries and solve real-world issues. 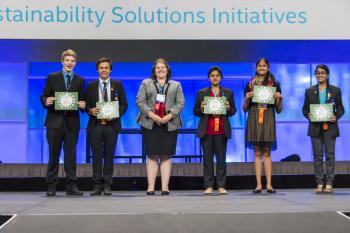 “We want to recognize these young leaders of our future to encourage them to pursue the solutions they create that address food security, climate change, health threats and more,” said Kelly Saunders, Sustainability Solutions Award presenter and project coordinator for the Initiative’s Sustainability Solutions Festival. “Our world’s future is represented by these students who want to make the world a better place.”

Nitschinsk discovered a way to harvest phosphorus from wastewater treatment plants for use as fertilizer. Increasing demand for fertilizer to feed the Earth’s growing population is stressing natural phosphorus supplies. Nitschinsk’s solution could ensure a sustainable and renewable source of phosphorus.

“When my name was called for the ASU Sustainability Solutions Award, I was incredibly surprised,” Nitschinsk said. “Going up on stage with everyone cheering for me was a truly special moment that I will remember for the rest of my life.”

“I am very thankful for this Sustainability Solutions Award and its funding, which I am planning to use to further my research and improve my apparatus,” Pande said. “I am honored to receive this award, and I feel a duty to use this award to help as many people as I can in the developing world through sustainable practices.”

Gupta and Nandy wanted to create a more reliable and available method for detecting and removing harmful pesticides on produce. Going beyond the widely-used paper strips that only warn consumers of pesticides, Gupta and Nandy’s paper strips also come with activated carbon to use with water to clean the produce.

“I entered the Intel ISEF with the aim to provide mankind with a pesticide-free diet, and wanted to develop a solution that is affordable for all, user friendly and self-sufficient,” Nandy said. “Intel ISEF has given me huge exposure to showcase my hard work, which gives me motivation to do more research like this.”

And Bontha has a solution for all carbon dioxide in the atmosphere that’s warming our planet: metal organic frameworks, or very porous metal compounds that capture and store carbon dioxide. She plans to use the Sustainability Solutions Award to further fund her research and testing.

“It has been my dream to be in the Intel ISEF since my first science fair in sixth grade,” Bontha said. “I am incredibly excited to win the Sustainability Solutions Award. Winning this special award is priceless.”

Before saving the world, the students will first tackle high school graduation and enter college, which should be a breeze for these rising innovators.