ASU students get 'Early Start' on their degrees

Gailyn Monroe was intrigued by the idea of attending a large university – even if that meant leaving her friends who were staying back in Colorado.

She decided to attend ASU because of its size and its well-known physics department. 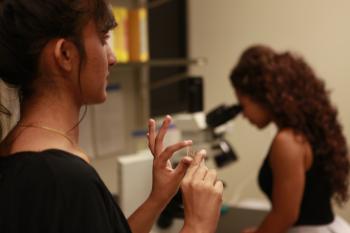 Her mother told her about the College of Liberal Arts and Sciences’ Early Start Program and asked if she wanted to sign up. Monroe said she figured it was worth a shot.

Now almost halfway into her second semester, Monroe said she is glad she took advantage of the opportunity.

“I think it helped immensely,” Monroe said. “It [helped me understand] what I could do with my major and just meeting people earlier, it helped because I feel like if I didn’t, I might have not met people or gotten out.”

Monroe was one of 64 students invited to be part of the college’s pilot CLAS Early Start two-week program. The college wanted to offer students an experience that demonstrates what their major offers and connects them with resources within their focus, said Paul LePore, associate dean for student and academic programs.

The School of Politics and Global Studies and School of Life Sciences each had its own program. The School of Earth and Space Exploration partnered with the Department of Physics to offer one program.

Faculty within the schools and department came up with curriculum and activities for the students to do each day. Upperclassmen students were mentors to the freshmen during the fall and shared their experiences.

“We didn’t want a cookie-cutter program that said, ‘These two weeks are going to be like this regardless of what your major is,’” LePore said. “We wanted something to be authentic to what the students would be doing in those degrees.”

Monroe said she enjoyed having something to do each day, whether it was making a telescope or meeting her professors. Because she was in the combined program, she also saw what earth and space exploration students experience in the major.

Ildefonso Celis, a political science freshman, said he enjoyed learning about what he could do in political science. He had planned on transferring to the W. P. Carey School of Business, but now he is going to add business as a second major.

“We were opened up to all these new things in just our first two weeks, without even starting school,” Celis said. “It was really cool what we’re expected to learn and what we learn. So professors, mentors, friends; basically you get the whole package from Early Start.”

LePore said he hopes the program expands to all of their schools and departments in the future. He assumed some could offer a combined program, like the School of Earth and Space Exploration and Department of Physics.

“I want to make sure our investment in students in the Early Start program or whatever we’re doing gets them to where they want to go,” LePore said.

American society is obsessed with change and the future—yet our institutions of higher education love to advertise how long they’ve been around. Why? Kevin Carey, author of The End of College and education policy director at the New America Foundation, told a crowd at the ASU Art Museum that it’s because universities want to signal to us that they’ve always been here—and will always be t...

American society is obsessed with change and the future—yet our institutions of higher education love to advertise how long they’ve been around. Why? Kevin Carey, author of The End of College and education policy director at the New America Foundation, told a crowd at the ASU Art Museum that it’s because universities want to signal to us that they’ve always been here—and will always be the same. However, “that’s not really true,” he said. At an event co-presented by Arizona State University, Carey explained how American universities evolved, and where he thinks they’re heading next. 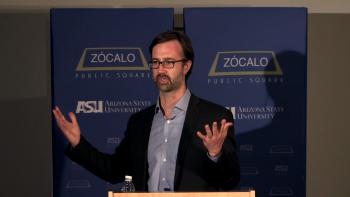