Having grown up with a father who had been an Arizona State University linebacker on Frank Kush’s Sun Devil football team, Kyle Brayer was steeped in ASU lore and in the love of sports. But he chose hockey over football, and he took a lengthy, roundabout path to becoming an ASU student.

Brayer ate, slept and breathed ice hockey and physical fitness in high school, hitting the ice at 6 a.m. and the gym in the afternoon. He played on the USA Junior Roller Hockey Team that won a gold medal in World Cup competition in 2001, the year he graduated. Then the terrorist attack of Sept. 11 happened, and Brayer joined the U.S. Marines. 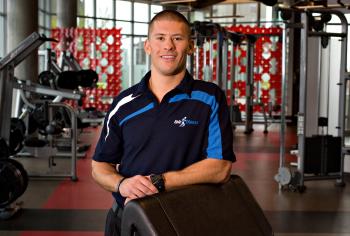 “I had wanted to be a Marine since I was 10 years old,” says Brayer, now a 28-year-old City of Tempe fireman and ASU junior. “My family was very patriotic. We flew the flag every day, and my grandfather was a decorated World War II veteran who was regional director of the American Legion in Arizona.”

Brayer was stationed in Iraq for nine months, building bombs and rockets, and he administered humanitarian aid in the Philippines and trained in Guam, Thailand and Korea. Soon he was put in charge of the Marine Corps Fitness Program, and he studied for and passed the fitness certification exams for the International Sports Science Association and the American Council on Exercise.

While still in the Marines he started his own personal training business in between deployments. After his service ended he moved back to Arizona, joining the Tempe Fire Department and continuing to build his business, Epic Fitness. He hired other firefighters, police and military veterans who were trained in exercise, wellness and nutrition to expand his staff.

Brayer also started attending classes at Mesa Community College, aware that he needed more education to be promoted in the fire service and to build his business. He enrolled at ASU in fall 2010 and is now a junior in interdisiciplinary studies, majoring in wellness foundations and public administration.

“I’m amazed at how much I’m learning in my classes," he says. "So much of it applies to what I’m doing. My public administration and management class is phenomenal in teaching about leadership. In computer literacy I’ve learned quite a bit that I can use in presentations. And my exercise science classes are great. I’m able to apply everything I’m learning. It’s a lot more fun than if I were 19.”

Free time for Brayer is rare, though he does enjoy hiking and snowboarding. This summer he climbed Mt. Kilimanjaro, and he also participated in the World Police & Fire Games in New York City.

In addition to a 56-hour work week at the fire department, he teaches three courses at Mesa Community College, in firefighter fitness and conditioning and preparation for the candidate physical ability test. His business just got a contract for offering personal training services at West 6th, the new high-rise apartments just west of Mill Avenue in Tempe. And he got married in April.

Luckily he can take many of his classes online. He says staff members at ASU’s Tillman Veterans Center have helped him receive his VA tuition benefits.

“At the Tillman Center they were great to explain the benefits of the new GI Bill. They’ve been outstanding, spending as much time as I needed to make sure all my paperwork is in order. The best part is that I can walk into the center without an appointment.”

Brayer mentors other service members who are completing their deployment, volunteering in the “Marine for Life” program to connect them with job opportunities. He also helps military personnel become certified fitness trainers while they are deployed.

The Arizona Ready-for-Rigor Project is distributing more than $1.2 million to almost 500 Arizona teachers and educators, as part of a grant being administered by ASU's Mary Lou Fulton Teachers College.

The Arizona Ready-for-Rigor Project is distributing more than $1.2 million to almost 500 teachers and educators at 17 schools in 10 Arizona school districts participating in the first annual wave of performance-based compensation. This program is part of the five-year $43.8 million U.S. Department of Education Teacher Incentive Fund (TIF) grant being administered by ASU’s Mary Lou Fulton Teachers College. 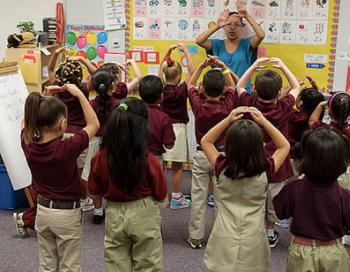 Performance-based compensation amounts are differentiated, awarding higher incentives to teachers and principals evidencing higher effectiveness ratings via their multiple evaluation measures, and student scoring based on their AIMS results. The project works in cooperation with the Arizona Department of Education to collect and interpret these data.

“Highly effective teachers and principals receive monetary rewards for their positive impact on student growth in reading and mathematics,” says Virginia McElyea, executive director of the Arizona Ready-for-Rigor Project. “This incentive is one factor that sustains a culture focused on students’ achievement in a school.”

All teachers and educators, including principals, who participate in the program are provided mentors for personal assistance, and training and developmental advancement through the TAP System for Teacher and Student Advancement. TAP is coordinated in partnership with the National Institute of Excellence in Teaching.

The 17 schools in the first wave of the project are from the following Arizona school districts: Cedar, Douglas, Gadsden, Ganado, Glendale, Mesa, Osborn, Sunnyside, UPSI and Window Rock. For the 2011-2012 academic year, the project has expanded to nearly 50 schools in 12 districts. More than 1,500 teachers are now involved, impacting 25,000 students.

The Ready-for-Rigor Project aims to develop and implement a performance-based compensation system in historically struggling schools for the purpose of increasing student achievement, retaining highly-effective educators, and fostering exemplary school culture in the highest-need communities across Arizona. To learn more about this project, and other grants involving the ASU Teachers College, please visit http://education.asu.edu/grants.

ASU’s Mary Lou Fulton Teachers College is unique among education schools – we are nationally known for our innovative and successful teacher preparation programs, the quality of our graduates and the strength of our school partnerships. Consistently ranked as a top graduate program by U.S. News & World Report, we are a force for discovery, helping to shape students into progressive leaders who will impact the future.