Making what’s commonly referred to as “green slime” artistic may seem like a herculean feat, but Arizona State University student Phillip Carrier is using tiny algae plants as inspiration for an art installation project as a Master of Fine Arts student from the Herberger Institute School of Art.

Carrier will blend art and science together throughout two summer semesters on the ASU Polytechnic campus as the inaugural artist in residence at the Arizona Center for Algae Technology and Innovation (AzCATI). 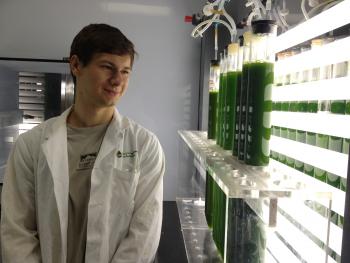 “I am thrilled to have this opportunity to work on a project that fuses the fields of art and technology, especially with the research community at AzCATI,” Carrier said. “Their in-depth research in algae will be an essential catalyst for my artwork and I'm excited to dive in to this project.”

AzCATI, which is embedded within the College of Technology and Innovation at ASU and part of the ASU LightWorks initiative, will provide tools, some financial support and space for Carrier to work throughout the summer. Once complete, Carrier’s instillation will remain at the Interdisciplinary Science and Technology Building 3 (ISTB3) on the ASU Polytechnic campus for visitors, as well as resident students, staff and faculty, to enjoy.

Installing art in the building not only serves to add interest to the building’s modern architecture, but also serves a higher purpose, said Gary Dirks, director of LightWorks and director of the Global Institute of Sustainability.

“Great minds, from scientists and researchers to philosophers and poets, must work together to create a cultural shift toward a sustainable existence,” Dirks said. “Artists like Philip tell stories that instruct us or stimulate us into thinking about what that future is going to look like.”

Adriene Jenik, ASU School of Art director, said the relationship between LightWorks, AzCATI and the School of Art can foster and enable new insights or perspectives on the research done at the algae center.

“Our goal with this pilot artist residency (what we hope will be the first of many) is to conduct our own creative research and outcomes alongside the algae researchers,” Jenik said. “The complex processes and systems being designed and pursued in the building can be distilled into an affective experience that goes beyond illustrative diagrams and bullet points, further enabling the realization of a sustainable future.”

Herberger Institute for Design and the Arts ASU LightWorks Engineering

Track and Field to wrap up season at NCAA Outdoor championships

National championships will be on the line in Eugene this weekend as the Sun Devil track and field team wraps up the 2012-2013 ASU competition calendar.

Track and Field to wrap up season at NCAA Outdoor championships

The Arizona State men's and No. 9 women's track and field teams will take part in the 2013 NCAA Outdoor Championships this week in Eugene, Ore., beginning Wednesday, June 5.  The Sun Devils will have eight individuals and two relays in action at Hayward Field, with events running through Saturday afternoon.

Five individuals competing in six events will be in action for the ASU women while the men will have three individuals competing.  The women's 4x400-meter relay and men's 4x100-meter relay squads will also be in action. Chelsea Cassulo will get the action going for the Sun Devils in the women's hammer throw beginning at 1:30 p.m. PT on Wednesday while the men's 4x100-meter relay will be the first running event in action beginning at 4:15 p.m. Thursday's field events start at 1:30 p.m. and the running begins at 4 p.m. The field events on Friday start at 3:15 p.m. with the running starting at 4:30 p.m. Saturday, the final day of competition, is scheduled to have the field events start at 12:30 p.m. and the running at 2:05 p.m. 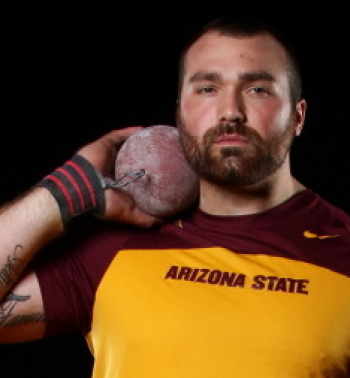 OUT OF THE BLOCKS

• Two of ASU's longest-standing school records were dropped this season at the Sun Angel Classic, with Christabel Nettey knocking off Jacinta Bartholomew's 24-year old school record in the long jump and Shelby Houlihan taking the reins in the 1,500-meter run after unseeding Priscilla Hein's 14-year old record as well.

• Chelsea Cassulo set the NCAA Dual Meet hammer throw record with her winning mark of 69.52m (228-01) at the Double Dual. She set the school record and became the sixth-best collegiate performer in history after going over 70 meters at the NCAA West Prelims

• Cassulo, Nettey and Ryan Herson (5k) have all been named Pac-12 Athletes of the Week with their performances this season

• In finishing third overall, the ASU women have been in the top-three at the conference championships in eight of the last nine seasons (since 2005).  No other school can lay such a claim.

• On the men's side following the team's fourth-place at the Pac-12 Championships, the Sun Devils have been a top-four team in 11 of the last 14 seasons (since 2000). Only USC and Oregon (both 12 of 14) have a better track record in that time.

Coverage throughout the weekend will be provided through a combination of the University of Oregon live streaming service through the Pac-12 Networks and the ESPN Family of Networks. A full broadcast schedule is available here: http://www.ustfccca.org/weekly-results/national-championships-central-ou... Fans can follow the Sun Devils on Twitter at @SunDevilTFXC for updates throughout the week on the ASU squad.