Two Arizona State University scientists are among those taking an audacious approach to studying the role of epigenetics in aging and behavior – using the genome of ants.


Jürgen Liebig, an assistant professor in the School of Life Sciences, and Navdeep Mutti, a postdoctoral fellow in Liebig’s group, joined with scientists from institutions in New York, Pennsylvania, China, and Denmark to sequence and publish the genomes of two socially divergent ant species Camponotus floridanus and Harpegnathos saltator. Insights gleaned from these ants’ genetic blueprints are already yielding tantalizing clues to the extraordinary social behavior. 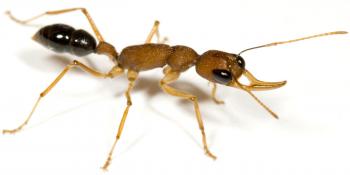 
The sequencing of the ant genomes is a result of a ground-breaking collaborative research project led by Danny Reinberg, a professor of biochemistry at New York University’s Langone Medical Center and a Howard Hughes Medical Institute Investigator. The analysis of the genomes has been published in the August 27 issue of the journal Science.


“With the genome sequences and gene expression analyses of our two ant species, we show the potential of ants as a new system to study the epigenetic foundations of aging and developmental, reproductive and behavioral plasticity,” says Liebig, who is also a researcher in the Center for Social Dynamics and Complexity in the College of Liberal Arts and Sciences at ASU.


One of the ant species is known as Jerdon's jumping ant, and the other, the Florida carpenter ant, is a destructive pest in the Southeastern United States.  Their complex social behavior, and the ease of maintaining them in a laboratory, make them ideal species to study epigenetics, how genes are turned on or off in response to changing conditions rather than through alterations to actual sequences of DNA. Epigenetics determine which genes are expressed in cells and how modifications to gene expression can be passed on to future cell generations.

“Ants are extremely social creatures and their ability to survive depends on their community in a very similar way to humans,” says Reinberg, who is also a member of the NYU Cancer Institute. “Whether they are workers, soldiers or queens, ants seem to be a perfect fit to study whether epigenetics influences behavior and aging.”


The ant genome project began in 2008 when Reinberg, Liebig and Shelley Berger of the University of Pennsylvania School of Medicine won an award from the Howard Hughes Medical Institute to study the epigenetic differences between ant species and to tie them to processes in other animals, including humans. Liebig says. “This project created the opportunity for us to blend our skills to develop a new approach and model system.”


The genome sequencing was performed in collaboration with the Beijing Genomic Institute in Shenzhen, China.


“In studying the genomes of these two ants, we were fascinated by the different behaviors and different roles that the worker ants develop,” says Reinberg. “Since every ant in the colony starts with the same genetic information, the different neuronal connections that specify the behavior appropriate for each social rank, must be controlled by epigenetic mechanisms. The findings could potentially help us learn more about the effect of epigenetics on brain function in humans.”


Comparing the two ant species, the scientists found that approximately 20 percent of their genes are unique, while some 33 percent are shared with humans. Researchers also established that the carpenter ant genome has about 240 million bases and the jumping ant has approximately 330 million bases, about one-tenth of the human genome. Bases are the building blocks of DNA. The scientists also determined that the carpenter ant has 17,064 genes and the jumping ant has 18,564, compared to about 23,000 in humans.


The jumping ant, or H. saltator, lives in small colonies and when the queen dies, fighting erupts among workers, until a few prevail and become replacement queens. These new queens, or gamergates, actually live longer than their worker siblings. In fact, the authors of the Science study found an over-expression of proteins linked to longevity, including the enzyme telomerase, in these replacement queens. Interestingly, replacement queens also contained an abundance of small RNAs, short stretches of genetic material that fine tune gene expression in many organisms, including humans.


The carpenter ants, or C. floridanus, have a far more sophisticated caste system and social organization. Only the queen lays fertilized eggs and when she dies, so does the colony. Non-reproductive ants belong to two separate castes, major and minor workers. Major workers protect the colony, while minor workers forage for food. Even though these two types of worker ants begin life remarkably similar, epigenetics sculpt their brains and behaviors in different ways leading to their specialized tasks. Comparing major and minor workers, the researchers discovered large differences in the expression of genes that function in the brain, a small but important step toward understanding how genes influence behavior in ants.


“After the honey bee, ants are the second family of social insects to have their genome sequenced,” says Roberto Bonasio, lead author of the study. “The next challenge is to start manipulating the genome of ants so that we can learn the function of specific genes related to aging and behavior.”


“The study of social insects has the potential to transform understanding about longevity, neurobiology, sociobiology and specializations that extend beyond the organism to the superorganism,” notes Liebig. “Each model system that scientists develop, be that of the round worm, Caenorhabditis elegans; the fruit fly, Drosophila melanogaster; transgenic mice or social insects, enhances our knowledge about basic molecular functions and mechanisms and will ultimately take us one step closer to more fully understanding human biology and disease.”

Thanks to heroics from Sarah Johnson and Ashley Kastl, the Sun Devils took a 3-2 win over VCU Rams to close out the University of Dayton Invitational.

The ASU Volleyball team pulled back on track Sunday afternoon with career matches and heroics from Sarah">http://thesundevils.cstv.com/sports/w-volley/mtt/johnson_sarah00.html">S... Johnson and Ashley">http://thesundevils.cstv.com/sports/w-volley/mtt/kastl_ashley00.html">As... Kastl to help lead ASU to a 3-2 win over Virginia Commonwealth University (VCU) to close out the University of Dayton Invitational. Kastl's 21 kills in the match are a career-best while Johnson tied her second-highest in career history with 24 digs before leaving the match with an injury. In the end, ASU prevailed with a 21-25, 25-27, 25-20, 25-20 and 15-9 win over the Rams to push their record to 1-2 on the year.

The Sun Devils opened the match sluggish, hitting a paltry .065 in the set to VCU's .257 with Mariel Frey leading the way with four kills. The Rams defense stepped up to bat as well, posting three blocks in the set to stifle the ASU offense. Cat">http://thesundevils.cstv.com/sports/w-volley/mtt/highmark_cat00.html">Cat Highmark set a career-mark as well in the first set alone as she posted three of her four service aces to top her previous single-match best. It wasn't enough though as VCU swept off with a 25-21 win.

The Sun Devils will now return home where they'll host the first of three home tournaments next Friday and Saturday. The Sun Devils will face Seattle University, San Diego State and Utah State. All matches will be held in Tempe at ASU's Wells Fargo Arena.