Growing up in a small, coastal town in Puerto Rico with grandfathers who were both farmers, Maria Cruz-Torres knew from a young age the impact of the environment on people’s livelihoods. So it was perhaps a natural thing for the Arizona State University anthropologist to focus her research on the relationship between adequate fishing resources and food security in northwestern Mexico – where she has discovered that women in particular play a critical role.

Cruz-Torres comes from a family of strong Latina women that includes her mother and three sisters, besides her father. She was the one who loved the sciences and dreamed of becoming a doctor one day. But in her second year of medical school at the University of Puerto Rico, the internationally recognized scholar balked at performing an autopsy and realized that medicine was not for her. 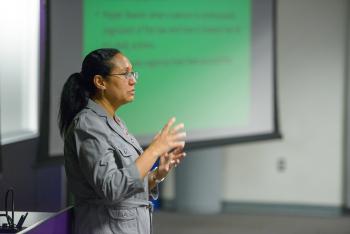 “I couldn’t tell my family that I didn’t want to be a doctor,” said Cruz-Torres, associate professor in ASU’s School of Transborder Studies and senior sustainability scientist in the Global Institute of Sustainability. “My mother is a nurse and wanted me to become a physician, and I wanted her to be proud of me.”

But another door opened when her affinity for the natural world led Cruz-Torres to switch her major to marine biology, inspired by Puerto Rico’s first female marine biologist with a doctorate, Alida Ortiz. Cruz-Torres took the professor’s seminar in fisheries her senior year. The topic she tackled – the social aspects of the country’s fisheries – up to that point had been little explored.

So her professor connected Cruz-Torres with a worldwide expert in maritime anthropology, Bonnie McCay, Board of Governors Distinguished Service Professor in the Department of Human Ecology of the School of Environmental and Biological Sciences at Rutgers University. Cruz-Torres moved to New Jersey and eventually earned her doctorate in anthropology/human ecology under McCay’s tutelage.

In searching for a location for her postdoctoral research, Cruz-Torres said it was Mexico that offered the support she needed: “The Minister of Fisheries in Mexico City sent me several books and asked me to come,” she said. “He also connected me with another woman, a well-known historian who was writing about fisheries, and asked her to be my mentor.”

It was 1990 and Mexico had just begun raising shrimp in hatcheries under a United Nations program to expand rural development, Cruz-Torres explained. At the time, the fisheries obtained their larvae from the ocean, where wild shrimp were abundant.

Cruz-Torres centered her research on the fisheries-dependent coastal communities of Sinaloa, a state in western Mexico on the Gulf of California. The University of Sinaloa has a marine sciences department that trains students in fisheries and aquaculture, and a local technical school offers a fisheries degree, but not much research was being done on the social and sustainability aspects of shrimp aquaculture, she said.

“Shrimp in this region has a lot of value,” Cruz-Torres said. “It is not only an export commodity, but it is consumed locally. People living there, in fact, have shrimp recipes for every social occasion.

“My research also is showing that shrimp is used as a currency, such as paying for a visit to the doctor. Especially in Mazatlan, Americans and Canadians living there accept shrimp as payment for things they provide to locals, such as clothes and services.”

Cruz-Torres pointed out that this agricultural region uses a lot of pesticides and fertilizers. Some of the chemicals and metals they contain end up in lagoons and estuaries, even washing into the ocean where they are being found in fish and marine organisms.

“For many people, the shrimp industry is their main livelihood allowing them to survive on a daily basis,” she explained. “When those fishing resources are depleted, there are not many options. But one of them is for people to migrate.”

How Mexican women are changing the shrimp industry

Cruz-Torres said that women are key players in helping these communities cope with a changing fishing industry. Her research is identifying several significant trends. One is that not only men are migrating north to find work in maquiladoras, border factories run by United States companies in Mexico. Young women, even entire families, are leaving Sinaloa to find jobs in Mexicali and Tijuana, she said.

“They come with expectations, but often the high cost of living and the stress of living in the U.S. cause them to return,” Cruz-Torres said. “Sometimes they save enough money from working in the U.S. to buy land, build homes and start their own businesses back in Mexico.”

The anthropologist said that women are also organizing unions and becoming labor activists to improve working conditions in both the border-town maquiladoras and in Sinaloa’s shrimp fisheries. Additionally, more and more of them are managing small family businesses that sell shrimp within the larger hierarchy of Mazatlan’s seafood processing and marketing industry.

“I think my research will give visibility to women in the fishing industry,” Cruz-Torres explained. “Instead of being an invisible part of the labor force, these women are becoming a very important part of the popular culture now. They are almost famous in many ways.”

For her part, Cruz-Torres has been able to capture the women’s stories via her research, said McCay, calling the scientist “exceptional” as an interviewer and ethnographer.

“Maria has proved the ability to endure exceptional hardships in difficult environments and communities – harsh deserts, extreme poverty, prevalent crime and corruption – and to gain the trust and confidence of people who have so many reasons to distrust any outsider, particularly someone with pencil, paper and tape recorder in hand,” McCay said.

“The trust and confidence given to Dr. Cruz by the people of the communities in western Mexico that she has studied are extremely valuable, and Dr. Cruz goes further in respecting this value by writing the brilliant accounts of their lives that figure in her articles and books.”

A representative from the U.S. State Department visited ASU to discuss the value of a global "Disabilities Treaty" that would provide ADA-type protections worldwide.

For U.S. citizens familiar with the Americans with Disabilities Act (ADA), it may be hard to believe that residents and visitors with disabilities outside of U.S. borders are not always guaranteed protection from discrimination or the right to accessibility accommodations. But the protections afforded by the ADA are not recognized in other countries, and many nations don’t have equivalent laws in place.

The Convention on the Rights of Persons with Disabilities, a document known as the “Disabilities Treaty” and adopted by the international community, was developed in collaboration with the disability community to address this disparity. The Disabilities Treaty is a call to action for all participating countries to protect the rights of people with disabilities on an equal basis with others. To date, over 140 countries have joined the Disabilities Treaty, and the Obama administration is pursuing congressional ratification of the treaty. 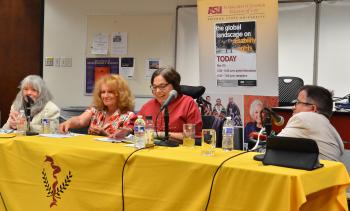 Judith Heumann, U.S. Department of State Special Advisor for International Disability Rights and recognized leader in the disability community, visited Arizona State University last week and spoke about the value of the treaty during a panel discussion on Monday evening. The panel, titled "The Global Landscape of Disability Rights," was held at the Sandra Day O’Connor College of Law and was co-sponsored by the Center for Law and Global Affairs and ASU Global. Charles Herf, faculty associate at the College of Law and lawyer representative to the U.S. Court of Appeals Ninth Circuit, moderated the discussion.

“We are honored to have Judy visit Arizona to talk about the importance of the international Disabilities Treaty, which the U.S. has not ratified, and for her to learn more about ASU’s innovative disability rights initiatives and global programs,” said Daniel Rothberg, Lincoln Fellow in the School of Politics and Global Studies and representative of ASU Global.

The panel discussed the potential for the treaty to protect citizens and benefit American businesses. For example, it would ensure protection of U.S. veterans with disabilities who work overseas for the government or U.S. companies.

No new legislation or commitments would result from U.S. ratification of the treaty. However, Heumann noted that by not ratifying, the U.S. risks being left out of conversations about global protection of people living with disabilities.

“The Conventions (included in the Disabilities Treaty) are great restatements of American principles,” noted Myers.

In a recent State Department video message, Heumann spoke of the impact of the treaty on university students.

“More students with disabilities are attending universities than in years past, and have the same career aspirations as students without disabilities. You want to study, work, travel and serve your country abroad. But many countries don’t have the same accessibility standards or protections against discrimination as we do in the United States,” she said.

On Monday, Heumann emphasized the significance of bringing the conversation to universities and to ASU in particular. She said that she has learned valuable lessons during her visit to ASU about the ways universities can build successful global partnerships and serve as models of accessibility to the international community. In particular, she noted ASU’s Higher Engineering Education Alliance Program in Vietnam as an avenue for showcasing the disability resources that are part of the university.

“We are excited to be part of this important discussion,” said Sethuraman “Panch” Panchanathan, senior vice president of ASU’s Office of Knowledge Enterprise Development. “ASU is an exemplar of inclusivity in higher education, being named one of America’s ‘most disability-friendly colleges.’ In addition, our faculty and students advance research and innovate new technologies that empower people with disabilities.”