Fifteen artists from the ASU School of Art in the Herberger Institute are using wine barrels as their canvases as part of the  Arizona Biltmore's Hollywood & Wine summer long art fest.

The Wine Barrel Artist-in-Residence program is dedicated to celebrating the work of ASU artists and to present art and artists in a way that engages and enriches the public while revealing the creative process through an open studio and exhibit of their work each weekend. 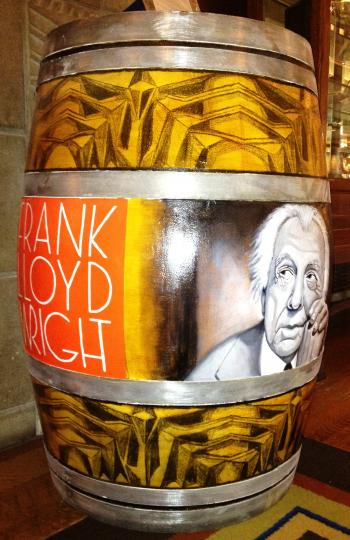 Through Sept. 2, each artists will be in the landmark resort's lobby painting a wine barrel with their interpretations of the "Hollywood & Wine" theme. The finished wine barrels will be on display throughout thel summer and will be auctioned off at the end of summer with proceeds benefiting the Herberger Institute.

For more information about the artists and samples of their work, visit arizonabiltmorehollywoodandwine.com/wine-experience.html#winebarrelartists.

In addition to the Wine Barrel Artists-in-Residence, the Biltmore art fest also includes The Marilyn Paintings exhibit by Ludvic. The exhibit marks the 50th anniversary of the actresses' death. Monroe was a frequent Biltmore guest whose favorite swimming – the Catalina Pool – was at the resort. The Hollywood & Wine event also includes The Wine Studio, which are a series of art classes offered through Aug. 30.

The Arizona Biltmore is at 2400 E. Missouri, Phoenix.

School of Criminology ranks 3rd in nation for faculty

A recent study ranked the faculty at ASU's School of Criminology and Criminal Justice third in the nation for scholarly research.

School of Criminology ranks 3rd in nation for faculty

A recent study ranked the faculty at ASU's School of Criminology and Criminal Justice third in the nation for scholarly research – a significant achievement considering the school only began its doctoral program a few years ago.

“I think these rankings announce that the ASU program has arrived as a top echelon program and taken its place alongside the very best programs in the field,” said Scott Decker, director of the School of Criminology and Criminal Justice at ASU. 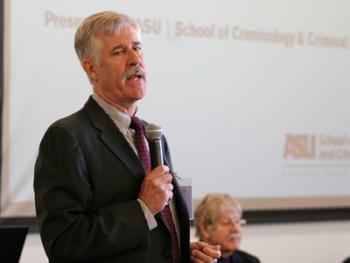 Decker admits many school rankings are like beauty contests that are voted on by faculty and alumni. Those rankings often reflect the number of alumni and where they went to school. Decker notes this ranking is different.

“This is an objective ranking that’s based on publications in top journals in a recent period of time that captures our existence as a PhD program,” Decker said. “And what this says is that compared to programs that have been around for dozens of years or more, ASU ranks third, and in a very short period of time. So, in the four years that we’ve offered a PhD, we’ve moved from no ranking at all to ranking third with programs that have 30 – or, in some cases – 40 years of history.”

The study, conducted by Florida State University professor Gary Kleck and University of Texas-Dallas assistant professor J.C. Barnes, examined the number of articles published in scholarly journals from 2005 to 2009. The count was limited to faculty members from the 35 criminal justice schools that grant doctoral degrees.

Based on the total number of articles published in major journals, ASU’s School of Criminology and Criminal Justice ranked fifth in the nation. ASU jumped to No. 3 when the authors took into account the prestige of the journals in which articles were published and the relative contribution each faculty member made. More points were awarded to the lead author and fewer points to the last one listed. Kleck and Barnes’ research, published in the March 2011 edition of the Journal of Criminal Justice Education, also accounted for schools having faculty "superstars" by removing the most productive faculty member from each school’s tally. Without its superstar faculty member, ASU still ranked third in the nation.

“This study shows that our program is not built on just a few superstars – a small number of faculty members who are publishing at an extremely high level,” said Decker. “It says that our average publication per faculty member reflects the broad participation of our faculty in scholarship and research.”

Decker was hired as director of the ASU School of Criminology and Criminal Justice in 2006. ASU President Michael Crow tasked Decker with building a doctoral program from scratch. The school welcomed its first doctoral class in 2008, the same year it moved from the ASU West campus in Glendale to new facilities at the ASU Downtown Phoenix campus. Assistant professor Gary Sweeten arrived the same year as Decker and watched it unfold.

“It’s impressive," Sweeten said. “What Scott has done here – he’s built a top quality program in a very short time. It is impressive to be ranked No. 3 or 5 among these programs that have been around a lot longer. That says something.”

An article by Sweeten published in the journal Criminology in January 2009 is reflective of the scholarly work by ASU professors. Sweeten wanted to explore the correlation between kids dropping out of high school and committing subsequent crime. He found that students who leave school early are at no greater risk of delinquency.

“All of us are here doing our own research trying to be as productive as possible,” Sweeten said. “Part of that is to further your own career, but you’re also trying to build up the school and trying to make this program the best that it can be. So, we each have a part in building up the overall reputation of the school. To see that recognized – that’s a great thing!”

Decker credits the dedicated work of Sweeten and other faculty members who he says are at the forefront of producing the knowledge that defines the field. But he also recognizes they can’t do it alone.

“We’ve created a supportive environment with good PhD and graduate students,” Decker said. “But we also have the travel money, computers, training and lecture series that provide the tangible support and the culture that allows them to be successful.”

That success should not be lost on prospective students, says Sweeten.

"I think for graduate students – that’s very important. Because if they want to be launched in their career they need to get published, so they need the opportunity to publish with faculty and they need to be associated with faculty who are influential in the field. So people who are publishing a lot and are being cited a lot – that’s the kind of place you want to go as a grad student.”

Even for undergraduates, Sweeten says faculty productivity is an indicator of a high-quality program.

“You want to be taught by the best in the field,” Sweeten said.