A group of researchers from Arizona State University is part of a larger team reporting a major advance in the study of human proteins that could open up new avenues for more effective drugs of the future. The work is being reported in this week’s Science magazine. 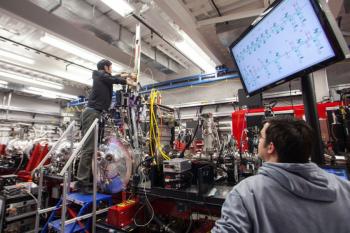 GPCRs are highly diverse membrane proteins that mediate cellular communication. Because of their involvement in key physiological and sensory processes in humans, they are thought to be prominent drug targets.

The method described in the paper was applied for the first time to this important class of proteins, for which the 2012 Nobel Prize was awarded to Brian Kobilka and Robert Lefkowitz, said John Spence, an ASU Regents' Professor of physics. Spence is also the director of science at National Science Foundation’s BioXFEL Science and Technology Center, and a team member on the Science paper.

“These GPCRs are the targets of a majority of drug molecules,” Spence said, but they are notoriously difficult to work with. This is the first time structural observations of the GPCRs have been made at room temperature, allowing researchers to overcome several disadvantages of previous imaging methods of the proteins.

“Normally, protein crystallography is performed on frozen samples, to reduce the effects of radiation damage,” Spence said, “but this new work was based on an entirely new approach to protein crystallography, called SFX (Serial Femtosecond Crystallography), developed jointly by ASU, the Deutsches Elektronen-Synchrotron (DESY) and the SLAC National Accelerator Laboratory.

“This method uses brief pulses of X-rays instead of freezing the sample to avoid damage, and so it reveals the structure which actually occurs in a cell at room temperature, not the frozen structure,” Spence added. “The 50 femtosecond pulses (120 per second) ‘outrun’ radiation damage, giving a clear picture of the structure before it is vaporized by the beam.”

The femtosecond crystallography technique could enable researchers to view molecular dynamics at a time-scale never observed before. Spence said the method basically operates by collecting the scattering for the image so quickly that images are obtained before the sample is destroyed by the X-ray beam.

By "outrunning" radiation-damage processes in this way, the researchers can record the time-evolution of molecular processes at room temperature, he said.

Spence said ASU played a crucial role in the project described in Science, through the invention by ASU physics professor Uwe Weierstall of an entirely new device for sample delivery suited to this class of proteins.

The lipic cubic phase (LCP) injector that Weierstall developed replaces the continuous stream of liquid (which sends a continuously refreshed stream of proteins across the pulsed X-ray beam) with a slowly moving viscous stream of "lipid cubic phase solution," which has the consistency of automobile grease.

“We call it our ‘toothpaste jet,’” Spence said.

He added that the LCP solves three problems associated with previous SFX work, which made this new work possible:

• The viscosity slows the flow rate so the crystals emerge at about the same rate as the X-ray pulses come along, hence no protein is wasted. This is important for the study of human protein, which is more costly than diamond on a per gram basis.

• Most important, LCP is itself a growth medium for protein nanocrystals.

“A big problem with the SFX work we have been doing over the past four years is that people did not know how to make the required nanocrystals,” Spence said. “Now it seems many can be grown in the LCP delivery medium itself.”

The collaboration between the team at ASU and the research groups at the Scripps Research Institute led by Professor Vadim Cherzov was initiated by Petra Fromme at ASU as a collaboration between two of the membrane protein centers of the Protein Structure Initiative of the National Institute of Health (PSI:Biology) – the Center for Membrane Proteins in Infectious Diseases (MPID) at ASU and Trinity College Dublin led by  Petra Fromme, and the GPCR Network at Scripps led by Prof. Ray Stevens.

Students in ASU's College of Technology and Innovation are recipients of a $10,000 grant to advance their project to tackle global poverty.

Students in Arizona State University’s College of Technology and Innovation (CTI) are recipients of a $10,000 HCD (human centered design) Connect Microgrant administered by IDEO.org to advance their project to tackle global poverty.

The genesis of ASU’s winning project was a class called "Make Your Ideas Happen" (CTI294), taught by Mark Henderson, senior sustainability scientist at the Global Institute of Sustainability, professor in the college's Department of Engineering and director of GlobalResolve. 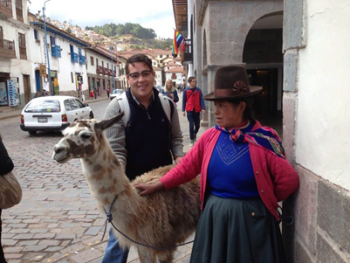 “The philosophy behind the class is to develop solutions for student-identified problems, some in developing world communities,” said Henderson. “These solutions, which are co-created by students interacting with the community, have the potential to be further transformed into sustainable business ventures. We are simultaneously creating life-changing experiences for our students, while making a global impact.”

In class, Jesus Garcia-Gonzalez, an applied biological science graduate student, and Kathleen Stefanik, a senior in the college's industrial and organizational psychology program, pulled together a team to design a solution to improve crop productivity in rural Peru by as much as 800 percent, using Biochar, a charcoal created from agricultural waste.

Garcia-Gonzalez, who was born and raised in Mexico, and moved to San Antonio, Texas, 12 years ago, explains the process of human centered design.

“It is about understanding problems from the perspective of the people in order to be better able to serve and work with them,” said Garcia-Gonzalez. “Through a consultative and engaging process of inquiry and co-creation, we were able to help address the biggest challenge of the region – the degraded soil quality, which was not only causing plants to become more vulnerable to plant diseases and pests, but drastically reducing crop yields, increasing farmers’ dependence on agrochemicals and engendering a food-insecure environment.”

The solution was found in an ancient technology known as Terra Preta de Indio (Indian dark earth), believed to have been created by pre-Columbian Amerindian populations in the Amazon, more than 3,000 years ago.

“The more we learned about Biochar, the more passionate we became,” said Garcia-Gonzalez. “Biochar improves the soil quality by acting like a sponge, absorbing and storing plant nutrients and soil moisture. This, in turn, leads to higher crop yields and profit margins for farmers. Biochar also has the potential to mitigate climate change, as its inclusion in the soil has been suggested as a possible way to reduce concentrations of carbon dioxide in the atmosphere.”

Since their visit last June to the small village of Pumamarca, Peru, to demonstrate Biochar’s production and use, neighboring communities have contacted the team to ask for help. The team is in the process of forming new collaborations with other communities and organizations throughout Peru to expand its reach.

The students also have started studies at the eco-village garden at ASU to investigate the effects of Biochar on the growth of quinoa and broad beans.

The visit to Peru also helped them to recognize further needs of the rural community, which has little access to electricity. The simple pyrolizer (a container for burning that adjusts to allow little to no oxygen flow) has the potential to be used for other purposes, such as providing a source of electricity, as a space heater or a cook stove, or even a water heater.

Garcia-Gonzalez recounts “having experienced firsthand taking cold showers in the morning during our stay certainly helped us to empathize with the farmers at a deeper level.”

He is preparing to go back to Peru in the summer to take classes in local languages, Quechua and Aymara, to help improve his ability to communicate with these Latin American communities.

According to his partner, Stefanik, an Arizonan who calls Mesa home, the HCD microgrant will help facilitate the next phase of this project.

Over the past few months, the team has been working hard designing and testing prototypes with the plan of going to back to the Peruvian communities in December to deliver the outputs. One such output is the crop dryer prototype, which will help to reduce the time required for drying agricultural remnants to make Biochar.

Stefanik, who is a Coca-Cola Gold Scholar to ASU, explains the significance of the team’s name – GAIA – as the name of the mythical goddess of the Earth, and also as the acronym for Growth Alternatives in Action.

Described as the “business strength behind the team,” Stefanik has been busy filing applications for GAIA’s recognition as a nonprofit, pursuing other fundraising opportunities, writing grant proposals and recruiting team members. She explains their plans to go beyond soils to look at irrigation, health and nutrition, and environmental policy, for example.

“We have recently recruited Meredith Kerrigan, a Tulane graduate student in public health to join the team to focus on the Peruvian community’s nutrition,” she said.

As they turn their sights and energy toward other sustainable projects and securing further grant support through avenues such as the Clinton Global Initiative, she emphasizes the commitment of expanding the pilot project in Peru, then Bolivia, and later to the rest of South America and the world.

“Food insecurity and soil depletion is a critical issue around the world, and we want to build GAIA International’s capacity to reach other parts of the world with our technology, innovation and skills,” Stefanik said.

Commenting specifically on the HCD microgrant, she added, “We are thrilled to be given this start-up grant and to have a channel to raise awareness of this project. ASU has created a lot of opportunities for the advancement of this project in many settings, and for this we are deeply grateful.”

Earlier this year, the team also won $1,000 in taking second prize in the first-ever ASU GlobalResolve Innovation awards for their project in Peru. In addition, GAIA International Inc. is part of the Great Little Companies Network managed by ASU's Entrepreneurship and Innovation Group, and was one of the first recipients of a $3,000 grant from ASU to help further their startup.

“I’m so proud of Jesus, Kathleen and the rest of the team for advancing this project,” said Henderson. “Through their new nonprofit, they have amazing potential to make global impact. That team really is an enthusiastic bunch. And that’s where great ideas start – with a team of passionate students who are ready to accomplish something. This combination of curiosity, passion, entrepreneurial spirit and the partnership of both professor Gerry Polesky and Andes Libres in Peru made this a perfect storm scenario for success.”

Commenting on the HCD award, dean Mitzi Montoya said, “At CTI our students work closely with communities in need of new ideas, no matter how far they are from ASU. This group of students epitomizes our mission at CTI. Representing a diverse range of majors, they came together to tackle a real-world problem and found an innovative solution through collaboration.”

Henderson also makes a plug for the classes: “CTI 294, 494 and 598 are great courses for students who want structure and mentorship for product development. It provides a built-in structure of regular meetings, access to expert faculty and mentors to help push progress. There is an amazing need for students to make impact in the developing world. We welcome students who want to answer that call, and we invite all majors to get involved.

"Problems of the developing world usually tend to be systems problems, and so we need multiple viewpoints and a multi-disciplinary approach to addressing such challenges,” said Henderson.

CTI courses will be offered in the coming spring semester at both the Polytechnic and Tempe campuses. Interested persons are invited to email globalresolve@asu.edu or visit globalresolve.asu.edu for more information.