New Herschel Space Observatory findings have given scientists a remarkable insight into the internal dynamics of two young galaxies. Surprisingly, they have shown that just a few billion years after the big bang, some galaxies were rotating in a mature way, seemingly having completed the accumulation of their gas reservoirs.

When galaxies form, they accumulate mass by gravitationally attracting vast, external gas clouds. As the gas clouds are consumed by the galaxy, they fall into haphazard orbits. These disordered paths cause turbulence in the host galaxies, which can drive star formation. 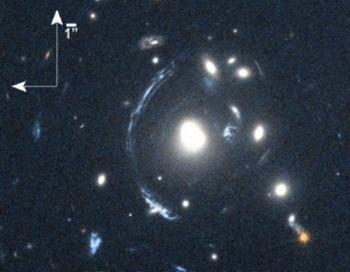 To investigate the internal conditions of forming galaxies, James Rhoads and Sangeeta Malhotra, both from Arizona State University, and colleagues targeted two young galaxies, known as SDSS0901 and the Clone. The light from both galaxies has taken 10 billion years to reach us across space. Thus, we are seeing them when they were comparatively young.

Rhoads studies galaxy formation, galaxy evolution and the reionization of intergalactic hydrogen by early galaxies. Malhotra’s research ranges from properties of dust and gas in the (relatively nearby) interstellar medium to some of the farthest known galaxies. In recent years they have also collaborated on finding and characterizing galaxies in the cosmic dawn, when the universe was less than a billion years old.

The current project focuses on a somewhat later time, the high noon of star formation in the universe – a time when the universe was about 3 billion years old, and when star birth in galaxies was much more active than it is today.

The two galaxies they choose to study are average galaxies for that time in cosmic history. This means that they are about 10 to 20 percent the size of our Milky Way, which is considered an average galaxy in the present-day universe.

Studying galaxies so far away is usually challenging because they appear too dim to study effectively, but in this case, the researchers were helped by a cosmic mirage known as a gravitational lens. The two galaxies both sit behind intervening groups of galaxies, whose gravity warps space. As described by Albert Einstein’s General Theory of Relativity, this warping acts like a lens. Although it distorts the images of the young galaxies, it helps by magnifying their light, thus bringing them within reach of Herschel’s HIFI instrument.

The researchers used HIFI to investigate the infrared light of ionized carbon, which is emitted at a wavelength of 158 micrometers. This spectral line is produced in the clouds that surround star-forming regions. HIFI showed the line was broadened into a double peak, and this allowed the motion of the gas to be fitted with a model.

“The two peaks represent two sides of a rotating galaxy. One side is rotating away from us and the other is coming toward us. The broadening of the peaks gives us an indication of the randomness of the motion on top of rotation,” explains Malhotra.

First, the team fitted the overall rotation of the galaxy, and then the turbulence in the gas clouds. To their surprise, they found that galaxy S0901 was extremely well behaved. Instead of turbulence, it was found to be in orderly rotation, much more akin to the majestic galaxies of today.

“Usually, when astronomers examine galaxies at this early era, they find that turbulence plays a much greater role than it does in modern galaxies. But S0901 is a clear exception to that pattern, and the Clone could be another,” says Rhoads.

“Galaxies 10 billion years ago were making stars more actively than they do now,” says Malhotra. "They usually also show more turbulence, likely because they are accumulating gas faster than a modern galaxy does. But here, we have cases of early galaxies that combine the ‘calm’ rotation of a modern one with the active star formation of their early peers. This suggests first that these galaxies have finished accumulating their gas, at least for now. But it also seems that turbulence is not actually required to trigger that early, active star formation."

Malhotra acknowledges the preliminary nature of their study. “This is not the last word on this. We need a bigger sample to be sure of our conclusions,” she says.

But that bigger sample will not be investigated by Herschel. As predicted, the liquid helium coolant needed to keep HIFI and Herschel’s other instruments working ran out in April 2013. Instead, the researchers hope to continue the work pioneered by Herschel using the Atacama Large Millimetre Array (ALMA), a ground-based array of 66 radio dishes in Chile.

“It is mind-boggling that with Herschel/HIFI – admittedly with the help of gravitational lensing – it has been possible to study the internal gas kinematics in galaxies when the universe was only a few billion years old, and what we can learn about them this way. This pioneering work by Herschel is bound to be continued,” says Göran Pilbratt, Herschel Project scientist at the European Space Agency.

The National Science Foundation, through Computing Research Association, will provide $892,350 over a three-year period for a unique new postdoctoral program for ASU, Northern Arizona University and University of Arizona.

The Computer Science and Engineering Postdoc Academy will begin with 15 postdocs at ASU in the first year, all in computer-related sciences. The model will eventually be extended to the more than 380 postdoctoral scholars at ASU.

“With grants like this, we’ll be able to generate new research combinations and new teaching configurations as we train the next generation of postdoctoral scholars,” says Eric Wertheimer, associate vice provost of Graduate Education.

The new training addresses several challenges in postdoctoral scholarship, according to the grant proposal. Postdocs are often over-focused on research at the expense of career development and personal advancement. Academic infrastructure can lack mechanisms to support postdocs. Advisers and mentors are overloaded with responsibilities that include mentoring several graduate students, as well as their own teaching and publishing.

• A physical and virtual center where postdocs can network, collaborate and access resources.

• Faculty members (Champions) who volunteer to supply additional career advice and mentoring to the postdoc.

• A curriculum of activities and events focused on multidisciplinary perspectives, challenges and innovations, future trends, and political and legal aspects of research.

Partners who will provide support and resources for the new program include ASU Graduate Education, Science Foundation Arizona and the School of Computing, Informatics and Decision Systems Engineering (SCIDSE) in the Ira A Fulton Schools of Engineering.

Co-principal investigators for the grant are Chitta Baral and Partha Dasgupta, professors in SCIDSE, and Pamela Garrett, academic program manager in Graduate Education.

“This grant will do more than just transform the experience of postdocs and their mentors in computer science,” says Wertheimer. “It represents a critical moment for postdocs at ASU, as it enables us to begin to make ASU a more dynamic and supportive place for them to work and learn.”

Computer science and engineering students have been identified as recipients of the first year training. Additional computer science postdocs are needed to fill the additional slots. Contact Pamela Garrett for further information.