A panel of researchers from Arizona State University’s Frankenstein Bicentennial Project will deliver public lectures as part of “It’s Alive!: Frankenstein on Film,” a weekend of screenings and conversations, Jan. 23-25, at the SIFF Film Center in Seattle.

The weekend is hosted by SIFF, the non-profit film organization that runs three year-round cinemas, as well as the Seattle International Film Festival, the largest, most highly-attended film festival in the United States. The panel will take place from 7-9:30 p.m., Jan. 24. 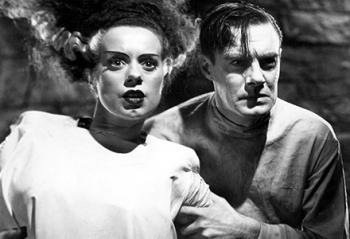 The “It’s Alive: Frankenstein on Film” weekend explores the variety of worlds that have evolved from Mary Shelley’s classic monster tale through the panel of ASU researchers; a “Cinema Dissection” event with film critic Robert Horton on the classic film "The Bride of Frankenstein" (1935); encores of the live-filmed version of Danny Boyle’s stage production, starring Benedict Cumberbatch and Jonny Lee Miller; and screenings of the films "Frankenstein" (1931), "Young Frankenstein" (1974), "Flesh for Frankenstein" (1973), "Abbott & Costello Meet Frankenstein" (1948) and "Frankenweenie" (2012).

“Working with the Frankenstein Bicentennial Project on this weekend of programs is the perfect fit for SIFF. It not only fulfills our mission to explore the intersection of entertainment and education, but affords us the opportunity to curate a diverse selection of 'Frankenstein'-inspired films, all of which are truly a joy to experience on the big screen,” says Clinton McClung, cinema programmer for SIFF.

At the panel, researchers from ASU’s Frankenstein Bicentennial Project will delve into the cultural history of Mary Shelley’s novel, its ethical, scientific and artistic legacy, and the numerous film adaptations it has provoked. Clips and discussion topics covered in the panel include the origin of the "Frankenstein" story, the changing look of the monster over the years, the first film adaptation of the tale in 1910, comedic and family-friendly adaptations of the "Frankenstein" myth and questions of ethics, scientific creativity and social responsibility that still resonate today in settings ranging from laboratories and government oversight hearings to films such as 2010’s Splice.

“There is no better cultural carrier than 'Frankenstein' of the ways in which we grapple with questions of scientific creativity and responsibility,” says David H. Guston, one of the panelists and the director of the Center for Nanotechnology in Society. “These films provide different and often nuanced insights into such questions, which were first emerging in Mary Shelley’s time but which are central to our own.”

Other speakers featured on the panel include Peter Lehman, director of the Center for Film, Media and Popular Culture, and Joey Eschrich, editor and program manager for the Center for Science and the Imagination.

Lehman notes, “'Frankenstein' has held fascination for filmmakers beginning with the silent Edison adaptation in 1910 and continuing to this day, with 'I, Frankenstein,' a 2013 film made in 3-D. Several more are currently in various stages of production.”

The entire “It’s Alive!” weekend is open to the public. Tickets for the panel are $12 each, or $7 for SIFF members. For more information and ticket sales, visit siff.net/cinema/frankenstein-on-film.

A primary challenge in the biosciences is to understand the way major evolutionary changes in nature are accomplished. Sometimes the route turns out to be very simple.

A primary challenge in the biosciences is to understand the way major evolutionary changes in nature are accomplished. Sometimes the route turns out to be very simple. An example of such simplicity is provided in a new publication by a group of ASU scientists.

They show, for the first time, that a hinge migration mechanism, driven solely by long-range dynamic motions, can be the key for evolution of a green-to-red photoconvertible phenotype in a green fluorescent protein (GFP). 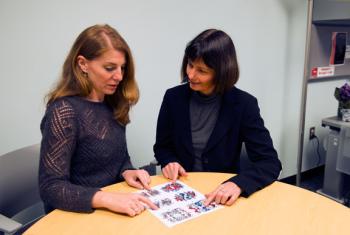 Rebekka Wachter, a professor in ASU’s Department of Chemistry and Biochemistry and the College of Liberal Arts and Sciences, is an expert in the field of structural characterization of GFP-like proteins. The present study is the culmination of eight years of intense effort in her laboratory.

The work, just published in the high impact journal Structure, involves collaborations with S. Banu Ozkan, from the Center for Biological Physics in the Department of Physics at ASU, and evolutionary biologist Mikhail Matz of the University of Texas.

Green fluorescent protein was first isolated from the jellyfish Aequorea victoria, which drifts with the currents off the west coast of North America. It was discovered that this protein glowed bright green under ultraviolet light. This phenomenon has found many creative applications in the biosciences.

The protein has been utilized as an extremely valuable luminous genetic tag for various biological phenomena. Using green fluorescent protein one can observe when proteins are made and where they go. This is done by joining the GFP gene to the gene of the protein of interest so that when the protein is made it will have GFP hanging off it. Since GFP fluoresces, one can shine light at the cell and wait for the distinctive green fluorescence associated with GFP to appear. The ability of some GFPs to turn red upon prolonged illumination makes them invaluable probes in super resolution fluorescence microscopy applications. This is where the current study is of most value.

To fluoresce, GFP-like proteins must adopt a compact barrel-like shape.  The light-triggered red phenotype may have arisen from a common green ancestor by a reversal of firm and soft regions located in opposite corners of the beta-barrel fold.

Although six crystal structures of reconstructed ancestral Kaede-type proteins indicate that the structure is highly conserved, analysis of chain flexibility by Molecular Dynamics and perturbation response scanning, performed in the group of S. Banu Ozkan has shown that the individual flexibility of each position (i.e. structural dynamics) alters throughout the evolution of green-to-red photo conversion. Thus this study suggests that green-to-red photoconversion may have arisen from a common green ancestor by the  shift of the rigid corner near  the chromophore to the opposite corner of beta-barrel.

“For the first time, this work establishes a direct experimental link between protein phenotypic change and collective dynamics without any external trigger, such as substrate, product or effector binding,” explains Wachter. “Based on structural, computational and kinetic data, we propose a novel photoconversion mechanism that provides a plausible path for the irreversible acquisition of red fluorescence.”

In spite of intense efforts in a number of laboratories worldwide, the mechanism of photoconversion of Kaede-type proteins has remained largely enigmatic. The present work sheds light on structural, dynamic and mechanistic features that must be considered when engineering improved fluorescent probes for super-resolution microscopy applications.

ASU's Department of Chemistry and Biochemistry ranks 6th worldwide for research impact (gauged by the average cites per paper across the department for the decade ending in the 2011 International Year of Chemistry), and in the top eight nationally for research publications in the journals Science and Nature. The department’s strong record in interdisciplinary research is also evidenced by its 31st national ranking by the National Science Foundation in total and federally financed higher education research and development expenditures in chemistry.