Seeking to better understand the composition of the lowermost part of Earth’s mantle, located nearly 2,900 kilometers (1,800 miles) below the surface, a team of Arizona State University researchers has developed new simulations that depict the dynamics of deep Earth.

A paper published March 30 in Nature Geoscience reports the team’s findings, which could be used to explain the complex geochemistry of lava from hotspots such as Hawaii. 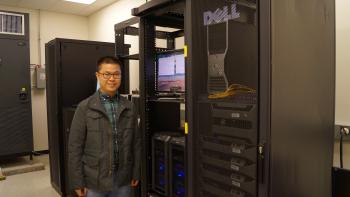 Mantle convection is the driving force behind continental drift, and causes earthquakes and volcanoes on the surface. Through mantle convection, material from the lowermost part of Earth’s mantle could be carried up to the surface, which offers insight into the composition of the deep Earth. The Earth’s core is very hot (~4000 K), and rocks at the core mantle boundary are heated and expand to have a lower density. These hot rocks (also called mantle plumes) could migrate to the surface because of buoyancy.

Observations, modeling and predictions have indicated that the deepest mantle is compositionally complex and continuously churning and changing.

“The complex chemical signatures of hotspot basalts provide evidence that the composition of the lowermost part of Earth’s mantle is different from other parts," explains lead author Mingming Li, who is pursuing his doctorate in geological sciences. "The main question driving this research is how mantle plumes and different compositional components in Earth’s mantle interact with each other, and how that interaction leads to the complex chemistry of hotspot basalts. The answer to this question is very important for us to understand the nature of mantle convection.”

It has long been suggested that the Earth’s mantle contains several different compositional reservoirs, including an ancient, more-primitive reservoir at the lowermost mantle, recycled oceanic crust and depleted background mantle. The complex geochemistry of lava found at hotspots such as Hawaii are evidence of this. The various compositional components in hotspot lava may be derived from these different mantle reservoirs. The components could become embedded in and carried to the surface by mantle plumes, but it is unclear how individual plumes could successively sample each of these reservoirs.

Joined by his adviser Allen McNamara, geodynamicist and associate professor in ASU’s School of Earth and Space Exploration, and seismologist and SESE professor Ed Garnero, Li and his collaborators’ numerical experiments show that plumes can indeed carry a combination of different materials from several reservoirs.

“Our calculations take a long time – more than one month for one calculation – but the results are worth it,” says Li.

Fostering a cross-cultural connection between US, China

ASU recently hosted the 2014 American Studies Seminar, bringing eight faculty members from Sichuan University in China to meet with faculty from throughout ASU.

Fostering a cross-cultural connection between US, China

The evolution of the U.S.-China relationship requires a deeper understanding between the two nations – particularly a greater awareness of histories and cultures. That’s something Arizona State University has been working on the past several years.

ASU recently hosted the 2014 American Studies Seminar, bringing eight faculty members from Sichuan University in China to meet with faculty from throughout ASU.

Jay Chen, director of the American Studies Center at Sichuan University and professor of English, says the goal is to highlight the comparisons and contrasts between the American Southwest and the southwest region in China.

“Despite differences in tradition and culture, we have many similarities,” says Chen, lead organizer of the seminar at ASU. “By bringing this delegation to ASU, we connect researchers in the field and broaden the horizons for both groups.”

Dave White, co-director of the Decision Center for a Desert City, led participants through WaterSim at the ASU Decision Theater. The WaterSim model demonstrates how data-driven analysis can foster better public policy decisions by showing the relationships between climate change, water supplies and urbanization in Phoenix. A faculty panel from the School of Transborder Studies shared insight into Hispanic culture in Arizona and information on transborder communities and social policy.

One thing stood out to Chinese scholars – the approach ASU takes to interdisciplinary teaching and research.  Chinese universities tend to be more discipline-specific, but many are trying to build linkages between departments, schools and colleges to foster more creative endeavors.

The delegation’s visit to ASU builds on a partnership established between the two universities in 2005. In 2013, ASU and Sichuan University co-sponsored the International Conference on Chinese and American Southwest Studies. In 2010, Sichuan University and ASU partnered to create the Center for American Culture in an effort to promote cross-cultural understanding. Since then, more than 20 ASU professors have taught at Sichuan University – sharing views on American culture and gaining insight into Chinese culture.

Kathryn Mohrman, American director of the Center for American Culture at Sichuan University and professor of practice in the School of Public Affairs, part of the College of Public Programs, notes, “This is an important partnership to both universities, as well as our respective communities. The ongoing collaboration strengthens efforts at both universities.”

The American Studies Center at Sichuan University, which was established in the 1980s, became a key research center under China’s Ministry of Education in 2012. Chen notes that American Studies is an evolving field in China. “What began as primarily a center for language studies and literature has grown to cover a wide cross-disciplinary area in American Studies, with particular interest in a comparative study of two Southwestern regions,” notes Chen.

“For some of the visiting scholars, this is their first time to the U.S.,” he says. “Being able to see first-hand, and work directly with peers at ASU really opens a greater dialogue into American Studies.”