The Phoenix Business Journal has named ASU’s Rosa Krajmalnik-Brown to its 2012 “Forty Under 40” list that honors young leaders in the metropolitan area. Krajmalnik-Brown is a scientist who uses new genomic-based tools to uncover the roles of microscopic organisms to clean water, produce energy and positively impact human health.

“My fascination with small life forms and their potential to help solve societal problems drives my research,” says Krajmalnik-Brown, who conducts her research at the Biodesign Institute’s Swette Center for Environmental Biotechnology. 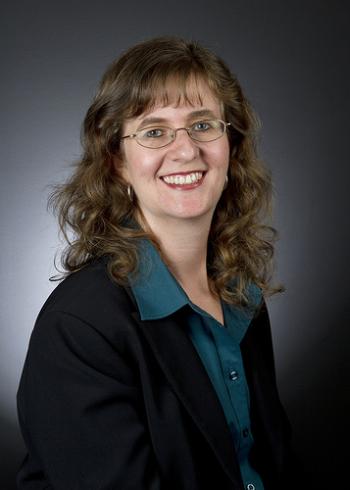 Krajmalnik-Brown is studying the link between differing microbial populations in the human gut and body weight among normal-weight individuals, those who have undergone gastric bypass surgery, and patients classified as morbidly obese. She hopes her research in partnership with Mayo Clinic Arizona will lead to therapies to alter these gut microbes, enabling weight reduction and improved health. She also is exploring similar differences in gut microoganisms between patients with autism and those not diagnosed with the disorder.

“Dr. Krajmalnik-Brown is taking the daring and transformative step of transferring powerful tools from the realm of environmental sustainability to the realm of sustainable human health,” says Bruce Rittmann, director of the Swette Center, who says he is proud he recruited Krajmalnik-Brown to ASU. “Her work is at the core of how we create partnerships with microorganisms so that they provide services to improve environmental sustainability.”

Krajmalnik-Brown has made significant contributions to her research team’s work with microbes to detoxify contaminated water, wastewater, sediments and soil. She also applies similar techniques and principles to improve energy generating systems.

Krajmalnik-Brown left Mexico City to study in the United States. She completed her doctoral degree in environmental engineering at Georgia Tech University.

“The turning point in my career was not in achieving my degree, but in having the opportunity to conduct research at the Biodesign Institute,” she says. “The support and facilities here have always made me feel that if I can dream it, I can do it.

“I love my job," she adds. "Dr. Rittmann has always treated me as a rising star with extreme potential – trusting me and providing plenty of opportunities to exploit and demonstrate my potential. I have learned from him that through hard-focused work and great people-management skills, anything can be achieved.”

In addition to her appointment at the Biodesign Institute, Krajmalnik-Brown is an assistant professor in the School of Sustainable Engineering and the Built Environment, one of ASU’s Ira A. Fulton Schools of Engineering.

A feature in this week's issue of Science highlights protein array technology, touching on research conducted by ASU's Joshua LaBaer.

With the successful completion of the Human Genome Project, research attention is increasingly focusing on proteins. Versatile products produced from genetic templates, proteins are principle actors in both the maintenance of health and the onset of illness. Protein microarrays are a means of bridging the gap between analysis of the nucleotide sequences that make up DNA and the proteome – the universe of proteins built from the amino acids coded for by genes. 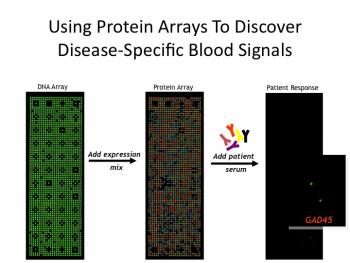 “Proteins are the machines of biology. Disease is nearly always a result of protein malfunction, and most drugs are designed to affect protein function. Protein microarrays enable us to test the biochemical properties of thousands of proteins simultaneously,”  says LaBaer.

While the genome provides the instruction manual for building living systems, proteins are the real molecular workhorses, faithfully carrying out genomic instructions, while also modifying their behavior under myriad environmental influences. Proteins provide structure to cells and tissues, facilitate signaling within and between cells, act as receptors, catalyze enzymatic activity, execute immune functions, and perform countless other biological tasks.

A more thorough understanding of the proteome is therefore vital to diagnostic medicine, particularly for establishing biomarkers – pre-symptomatic indices of early disease states, detectable as protein components in blood. LaBaer’s group is working on discovering biomarkers for a range of deadly illnesses, including, breast, ovarian, lung and oropharyngeal cancers; type I diabetes and assorted infectious pathogens.

Until recently, studying the complexities of proteins, (as opposed to the sequence of four nucleotides making up DNA), has been daunting. A protein microarray usually consists of a library of proteins immobilized on a glass slide or chip in a 2D addressable grid format. Arrays of this sort are made by expressing and painstakingly purifying proteins, then imprinting them onto the slide’s surface.  Once a library of proteins has been splayed out on an array, high-throughput methods can be used to investigate their behavior.

Similar arrays have long been used to study DNA, yielding a steady stream of insights into the genome and in some cases providing rapid and accurate diagnostic tools. Researchers would like to repeat the successes of DNA microarrays with protein microarray technology, though a number of hurdles exist. Compared with nucleic acids, proteins exhibit enormous structural diversity and complexity. The synthesis, stabilization and purification of proteins are often laborious undertakings. Adequately attaching proteins to the array surface is tricky and subsequent detection of these proteins through binding events is considerably more complex than in the case of nucleic acid arrays.

Protein microarrays can be broken down into two broad categories. With so-called forward phase arrays, one protein sample is screened against multiple reagents. The capture protein – usually an antibody – is first affixed to the slide surface. The immobilized antibody can then be used to capture antigens it recognizes when a test sample is spread over the array. The test sample could be blood, cells, cell lysates, or some other biological specimen. The captured analyte can then be detected directly, using a fluorescent dye. The technique offers high specificity, but is time consuming.

In reverse phase arrays, the test sample is printed directly on the slide and the array is then detected with a dye-conjugated protein, such as an antibody. One of the key advantages of the reverse phase microarray is a reduction in the number of antibody probes needed to detect a protein antigen. Examples of both forward and reverse arrays are presented in the current Science review.

LaBaer’s group works with a novel protein array, designed in their lab. Known as Nucleic Acid Programmable Protein Array or NAPPA, the technique is particularly powerful because it obviates the need to purify proteins prior to their use in a microarray. Instead of using the protein itself, the NAPPA technique spots protein-coding circular pieces of DNA known as plasmids – the blueprints for building proteins – onto slides, bringing the simplicity and low cost of DNA microarray technology into the world of proteomics.

Immediately prior to the use of the array, an in vitro transcription/translation system is applied as a coating on the slide, turning each array into a nanoscale factory for protein production. Issues of protein stability and purification are avoided, as proteins are synthesized immediately prior to use.

“The central concept for NAPPA is to make the proteins ‘fresh’ only moments before testing them and to use the machinery most relevant to the proteins to make them. Currently we are using human ribosomal machinery to make human proteins,” LaBaer says.

LaBaer’s method currently allows some 2300 genes to be arrayed on a conventional microscope slide. Given the vastness of the human proteome, comprised of more than 30,000 distinct proteins, the technique requires around 10 array slides to fully sample the proteome. Spotting DNA plasmids at higher densities requires new imprinting techniques to avoid chemical cross talk between closely situated array spots. Using advanced piezoelectric-pipetting technology, the group anticipates next generation protein arrays that will improve protein densities per slide by roughly an order of magnitude.

Currently, at the Piper Center’s state of the art facility, some 14,000 human proteins are employed in an array in order to detect antibody targets of disease. The technique is being used to investigate posttranslational modifications to proteins and for the identification of novel autoantibodies.

Post-translational changes can occur during or after protein synthesis, resulting in modifications to protein residues. Such changes alter physical and chemical properties affecting protein shape and function. The presence of particular autoantibodies may signal presymptomatic recognition of disease antigens, for example those produced by cancerous tumors.  One recent study identified a panel of 28 antigens that can pinpoint early onset breast cancer in blood sera with 80 to 100 percent specificity.

In addition, this research may help speed more effective vaccines to market by identifying immunogenic proteins associated with infectious diseases like cholera, anthrax and Pseudomonas aeruginosa.

“The key to this work,” according top LaBaer, “is to test many patients and many healthy indviduals to determine which responses are specifically found only in the patients.  Most important is to confirm these findings in independent experiments."