ASU researcher finds exercise may be intervention for Down syndrome

Marcus swings his legs down from the motorized bike with a groan after a half-hour session, but he’s exhilarated. He is one of eight participants who come to the Tempe and Downtown Phoenix campuses three times a week to work out on a bike. Another eight have already completed the study. 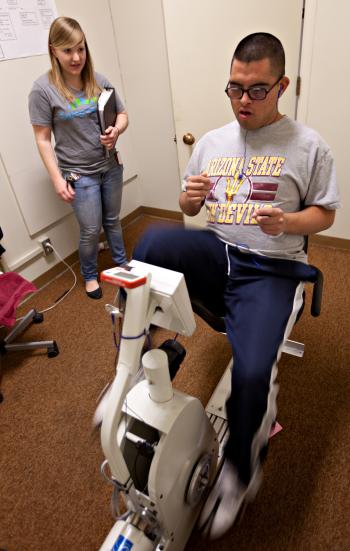 Katy Lichtsinn, an ASU kinesiology senior who acts as his cheerleader and mentor, warns his aunt that Marcus might be tired after pedaling at 110 rpm.

“I’m not tired,” says Marcus, taking a gulp from a water bottle. “But I can’t feel my legs.”

Persons with DS, a chromosomal condition that affects about 400,000 children born in the United States, have broad cognitive impairment and physical characteristics that limit their ability to perform functional tasks of daily living. To date, there have been few, if any, behavioral interventions that have been shown to bring about improvement in their functioning.

Shannon D.R. Ringenbach, an associate professor of kinesiology in the School of Nutrition and Health Promotion, hopes to show that Assisted Cycle Therapy has the potential to improve the lives of people with DS. She has received a $150,000 grant from the Eunice Shriver National Institute of Child Health and Human Development to conduct the study.

A smaller pilot study she carried out two years ago revealed that adolescents with DS improved their speed of information processing and manual dexterity, even after one Assisted Cycle Therapy session. The same was not true after one voluntary exercise session, since people with DS tend toward sedentary behavior and have reduced strength.

An innovation in Ringenbach’s approach is the use of a specialized stationary bicycle with a motor, so participants exercise faster. Assisting in the research are about 15 ASU undergraduates and one doctoral student, who monitor the participants carefully and urge them on. Participants are tested periodically on their functional behaviors, manual dexterity, executive function and depression.

“It’s really remarkable that by doing this kind of exercise, they begin to think faster,” says Ringenbach. “We believe they develop new brain cells. We don’t know yet how long it will last. But it has the potential to dramatically change the quality of their lives. With early intervention in children with Down syndrome, it’s possible it could improve their IQ.”

Exercise has been shown to improve cognitive, physical and mental health in people with Parkinson’s disease.

Marcus’ aunt, Georgina Rosas, has been caring for him along with her sister since he was six months old. He graduated from Tempe High School last year, and has been active in Special Olympics. Rosas enrolled him in the ASU study in hopes it would help him think a little faster. She wishes there were more interventions for people with DS.

“A lot of Down syndrome children are smart and able to learn to do things, but they get left behind, in the research,” she says. “He is well loved, with two devoted aunts. But it’s nice to have people at the university who are looking into this.”

Participants’ families tell Ringenbach that their children enjoy the program a great deal. They are talking and interacting more, their moods are better, and they’d like the program to continue. She hopes to extend her research by developing a motorized bike for smaller children, and perhaps to develop a program for individuals with DS at the downtown YMCA.

John Lynch, honors faculty fellow at Barrett, The Honors College at ASU, is fascinated with the physicist who answered the oft-asked question, why is the sky blue?

John Lynch, honors faculty fellow at Barrett, The Honors College at Arizona State University, is fascinated with the physicist who answered the oft-asked question, why is the sky blue?

John Tyndall, a Victorian-era Irish physicist (1820-1893), is credited with being the first to offer an explanation about the azure hue of the sky. He also was the first to prove the greenhouse effect and to invent a system to measure carbon dioxide in human breath. His many years of work focused on a wide array of subjects, including atmospheric heat, air purification, glaciers, and even how to build a better foghorn. 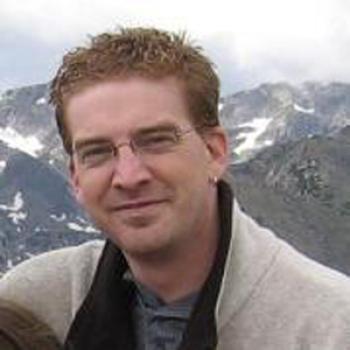 Tyndall didn’t spend all of his time exclusively on scientific pursuits. He also was an accomplished mountaineer who was on the first team to reach the top of the Weisshorn and among the first to summit the Matterhorn in the Swiss Alps.

Tyndall also was a prolific letter writer who penned thousands of pieces of correspondence and received an equal number in return from friends and colleagues.

Six thousand letters written by or to Tyndall are the focus of The John Tyndall Correspondence Project, a collaboration of researchers from universities in the United States, Canada, England, Ireland and New Zealand. Lynch is the collaborator from ASU.

The project – which began in 2008 and is funded by the National Science Foundation and the Andrew W. Mellon Foundation – aims to collect, transcribe and publish Tyndall’s correspondence in print and in a searchable online format. Pieces of Tyndall correspondence are scattered in many places, including in Europe and the U.S. More than 6,000 items have been found and will be included in the project.

A main project goal is to engage scholars in the themes of John Tyndall’s correspondence, such as the relationship between science and religion, how Tyndall and his contemporaries worked to popularize science, and advances in physics and climatology.

Lynch, along with two ASU student researchers, already have transcribed more than 600 letters – many written in Tyndall’s tight and difficult to read hand, and some with parts scratched out and written over.

“John Tyndall is a fascinating character. He was a physicist, a mountaineer and a polemicist,” Lynch said.

“The project will shed light on one of the most important scientists of his time, whose work is still relevant today, and also provide a resource for scholars and researchers,” he added.