It’s been more than 40 years since astronauts returned the last Apollo samples from the moon, and since then those samples have undergone some of the most extensive and comprehensive analysis of any geological collection.

A team led by Arizona State University researchers has now refined the timeline of meteorite impacts on the moon through a pioneering application of laser microprobe technology to Apollo 17 samples. 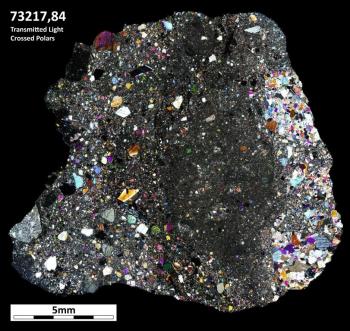 Impact cratering is the most ubiquitous geologic process affecting the solid surfaces of planetary bodies in the solar system. The moon’s scarred surface serves as a record of meteorite bombardment that spans much of solar system history.

Developing an absolute chronology of lunar impact events is of particular interest because the moon is an important proxy for understanding the early bombardment history of Earth, which has been largely erased by plate tectonics and erosion, and because we can use the lunar impact record to infer the ages of other cratered surfaces in the inner solar system.

Researchers in ASU’s Group 18 Laboratories, headed by professor Kip Hodges, used an ultraviolet laser microprobe, attached to a high-sensitivity mass spectrometer, to analyze argon isotopes in samples returned by Apollo 17. While the technique has been applied to a large number of problems in Earth’s geochronology, this is the first time it has been applied to samples from the Apollo archive.

The samples analyzed by the ASU team are known as lunar impact melt breccias – mash-ups of glass, rock and crystal fragments that were created by impact events on the moon’s surface.

When a meteor strikes another planetary body, the impact produces very large amounts of energy – some of which goes into shock, heating and melting the target rocks. These extreme conditions can "restart the clock" for material melted during impact. As a result, the absolute ages of lunar craters are primarily determined through isotope geochronology of components of the target rocks that were shocked and heated to the point of melting, and which have since solidified.

However, lunar rocks may have experienced multiple impact events over the course of billions of years of bombardment, potentially complicating attempts to date samples and relate the results to the ages of particular impact structures.

Conventional wisdom holds that the largest impact basins on the moon were responsible for generating the vast majority of impact melts, and therefore nearly all of the samples dated must be related to the formation of those basins.

While it is true that enormous quantities of impact melt are generated by basin-scale impact events, recent images taken by the Lunar Reconnaissance Orbiter Camera confirm that even small craters with diameters on the order of 100 meters can generate impact melts. The team’s findings have important implications for this particular observation. The results are published in the inaugural issue of the American Association for the Advancement of Science’s newest journal, Science Advances, on Feb. 12.

“One of the samples we analyzed, 77115, records evidence for only one impact event, which may or may not be related to a basin-forming impact event. In contrast, we found that the other sample, 73217, preserves evidence for at least three impact events occurring over several hundred million years, not all of which can be related to basin-scale impacts,” says Cameron Mercer, lead author of the paper and a graduate student in ASU’s School of Earth and Space Exploration.

Sample 77115, collected by astronauts Gene Cernan and Harrison Schmitt at Station 7 during their third and final moonwalk, records a single melt-forming event about 3.83 billion years ago. Sample 73217, retrieved at Station 3 during the astronauts’ second moonwalk, preserves evidence for at least three distinct impact melt-forming events occurring between 3.81 billion years ago and 3.27 billion years ago. The findings suggest that a single small sample can preserve multiple generations of melt products created by impact events over the course of billions of years.

“Our results emphasize the need for care in how we analyze samples in the context of impact dating, particularly for those samples that appear to have complex, polygenetic origins. This applies to both the samples that we currently have in our lunar and meteoritic collections, as well as samples that we recover during future human and robotic space exploration missions in the inner solar system,” says Mercer.

ASU's Cronkite School and Ira A. Fulton Schools of Engineering will begin offering dual degrees in journalism and graphic information technology in fall 2015.

The announcement marks the first of a series of dual undergraduate degrees to be offered by the Cronkite School in concert with other ASU schools in the coming months. The initiative allows students to pursue two separate degrees in less time by streamlining the admissions process and course requirements. 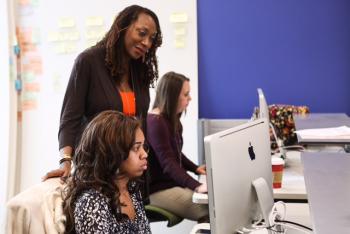 Under the Cronkite-Fulton partnership, ASU students can simultaneously earn a bachelor of arts in journalism and mass communication and a bachelor of science in graphic information technology by taking between 122 and 137 credit hours, depending on English and foreign language placement. Prior to the program, students would typically take more than 170 credit hours for the two degrees.

“We are thrilled to be partnering with the Ira A. Fulton Schools of Engineering, one of the best and most innovative,” said Christopher Callahan, Cronkite School dean and university vice provost. “Deep journalism knowledge coupled with a sophisticated understanding of Web development is a powerful combination in today’s digital media market.”

“This is a fantastic opportunity for students, given the expanding role of technology in communicating complex messages, ideas and news in our rapidly changing world,” said Paul C. Johnson, Fulton Schools dean. “The Fulton Schools of Engineering are excited to be teaming with the world-renowned Cronkite School in this first of what we hope will be many unique programs linking our schools at the intersection of journalism, communications and technology.”

With the graphic information technology degree, students select between Web development and gaming animation as an area of focus. Cronkite’s journalism degree requires a professional internship as well as participation in the school’s New Media Innovation and Entrepreneurship Lab, where students design and create cutting-edge digital media products for regional and national media companies and other organizations.

The graphic information technology program at ASU is part of the Polytechnic School, one of ASU’s Ira A. Fulton Schools of Engineering. For more information on the dual degree program, visit cronkite.asu.edu/dual-degree-program.