Arizona State University’s Center for Meteorite Studies recently received a precious gift. Aside from its price tag, what makes this space rock so special is where it came from: the moon.

The new sample belongs to the rare class of meteorites originating from the moon called “lunaites.” Of all known distinct meteorites in this world, of which there are tens of thousands, less than a hundred are thought to come from the moon. 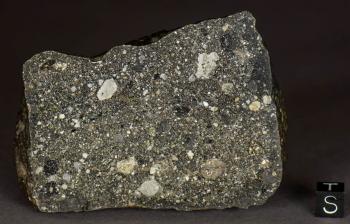 The softball-sized meteorite donation is valued at about a quarter of a million dollars, and is likely to be the most significant single donation ever made to the center.

“Of the tens of thousands of known meteorites (most of which come from asteroids), only a very tiny fraction are lunaites. So this is a very rare kind, even among meteorites, which are themselves quite rare among rocks found on Earth,” says Meenakshi Wadhwa, director of the center and professor in ASU’s School of Earth and Space Exploration. “This new sample is probably one of our most prized pieces and, without a doubt, one of the most significant recent additions to our collection.”

Known as Northwest Africa 7611, this meteorite was found near the Moroccan/Algerian border in May 2012. It was subsequently purchased by the donor, Jay Piatek, from a Moroccan meteorite dealer. Piatek is an avid meteorite collector and owns one of the more significant private collections in the world. He is a supporter and generous donor to university and museum collections.

The center has six other lunaites in its collection, but their total weight is only about 60 grams. As such, this new lunaite, weighing 311 grams, represents a five-fold increase in the total mass of lunar material in the collection. The total known weight of the original specimen was 916 grams, and the mass donated to the center is the largest remaining mass (or main mass) of this meteorite.

“The chemistry, mineralogy and textures of lunar meteorites, or lunaites, are similar to samples that were brought back from the moon by the Apollo missions (1969-1972). These characteristics are quite distinct from other classes of meteorites and terrestrial rocks,” explains Wadhwa. “Lunaites can have a small amount of metal, but it is present in very small abundance compared to ordinary chondrites, for example, which are the most common types of meteorites.”

The gift will be on display for the short term, but there are plans to use it for research purposes in future years.

“It is a beautiful, fresh-looking piece, with one cut and polished face that shows the internal texture and fabric of the rock – as such, it displays a unique snapshot of the lunar surface,” says the Center for Meteorites collections manager Laurence Garvie.

Consisting of specimens from around 2,000 separate meteorite falls and finds, meteorites in the center’s collection represent samples collected from every part of the world. Visitors may explore the collection weekdays, from 8 a.m. to 5 p.m., on the second floor of Interdisciplinary Science and Technology Building IV.

Outstanding ASU students to study in Canada as Killam Fellows

Four ASU students have received the Killam Fellowship to study abroad in Canada. The fellowship supports a bi-national exchange of American and Canadian students.

Outstanding ASU students to study in Canada as Killam Fellows

Maggie LaPoint, a Barrett Honors College student majoring in business and Spanish, is one of four Arizona State University students who have won a Killam Fellowship to study in Canada for one semester during the academic year. 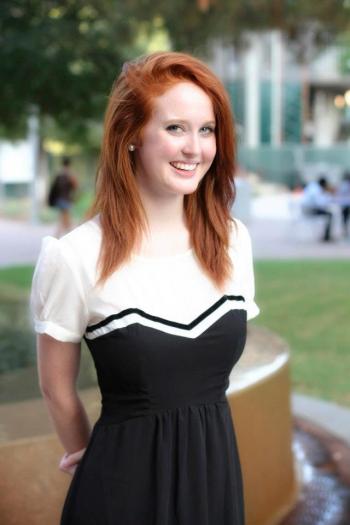 LaPoint will spend the fall 2014 semester studying public health care systems at the University of Alberta in Edmonton, Alberta.

“A big part of my studies in Canada will go toward my honors thesis, centered on national public health care systems, which I will be completing upon my return to ASU,” LaPoint said, explaining what prompted her to apply for the prestigious scholarship.

“While I currently plan on working on an MPA/MBA with a more domestic focus, I am open to the experience ahead of me, and am excited to see what opportunities and interests I may gain from it,” she said.

“Canada is a wonderful place to expand my perspective on all of my academic interests – public and global health, international relations, social justice, feminist and queer theory, and French,” Kirkham said.

Her future plans are to join the Peace Corps to do HIV/AIDS volunteer work, and to go to graduate school in global or public health.

“French language skills are very useful for international travel for global health. Canada embraces multiculturalism, especially the cultures of their First Nation communities, which is key for effective work in sociology and public health,” she added.

"I am focusing on social and economic justice issues within the United States, so I think it will be helpful for me to study how another country handles these same issues, especially one that is so similar to the U.S. in a lot of ways and yet is also very different," she said.

Michael Kim, a Barrett student majoring in biophysics and mathematics will study at the University of Toronto in Ontario.