ASU ranked one of best universities in the world

Arizona State University has moved up in the rankings of the top 100 universities in the world and is now rated 78th by the Center for World-Class Universities, Shanghai Jiao Tong University. 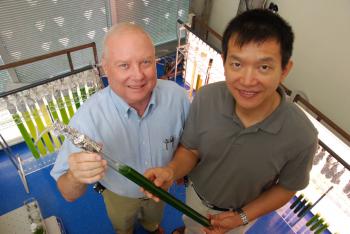 The Academic Rankings of World Universities is considered one of the two most prominent world university rankings, along with the Times Higher Education World University Ranking.

In addition to the overall ranking, ASU was highly ranked in several other categories by general scientific field and subject matter:

• 23rd in the social sciences (field)

ARWU uses six objective indicators to rank world universities, including the number of alumni and staff winning Nobel Prizes and Fields Medals, number of highly cited researchers selected by Thomson Scientific, number of articles published in journals of Nature and Science, number of articles indexed in Science Citation Index - Expanded and Social Sciences Citation Index, and per capita performance with respect to the size of an institution.

“We are honored to achieve this ranking among such distinguished universities,” said R. F. “Rick” Shangraw, Jr., ASU’s senior vice president for Knowledge Enterprise Development. “It reflects the talent and dedication of our faculty members, who are advancing solutions to some of the most complex problems facing our world today, such as cost-effective health care, alternative energy and international conflict.”

In total, more than 1,000 universities are actually ranked and the best 500 are published on the website: http://www.shanghairanking.com/ARWU2011.html# .

According to the Shanghai university, the initial purpose of ARWU was to find the global standing of top Chinese universities. Since then it has attracted a great deal of attention from universities, governments and public media worldwide. A survey on higher education published by The Economist called ARWU "the most widely used annual ranking of the world's research universities." The Chronicle of Higher Education reported that ARWU "is considered the most influential international ranking."

By country, the United States had 53 universities in the top 100, followed by the United Kingdom with 10; Germany with six; Japan with five; Canada, Australia and Switzerland with four; France, Denmark  and Sweden with three, the Netherlands with two; and Belgium, Israel, Norway, Finland and Russia with one.

The Student Recreation Complex on the Tempe campus is now open after a temporary closing due to flooding caused by a pipe break.

The Student Recreation Complex on the Tempe campus is now open after a temporary closing due to flooding caused by a pipe break. For more for information about SRC hours of operation, visit the SRC website at http://src.asu.edu/.

To receive notifications of mid-level incidents such as this, sign up for ASU Advisory. Information: http://asunews.asu.edu/20110705_ASUadvisory.