ASU ranked No. 2 in nation among up-and-coming schools

Arizona State University is ranked No. 2 in the nation among up-and-coming schools in the 2015 U.S. News and World Report Best Colleges Rankings. The ranking looks at universities most often cited by college administrators asked to nominate schools that have made the most promising and innovative changes in academics, faculty and student life. The W. P. Carey School of Business at ASU was recognized among the nation's top 30 for undergraduate business schools – the ninth time in 10 years the school has made the top 30 list.

In addition to the No. 29 ranking overall, the undergraduate business program is among the top 10 in the West. The school’s acclaimed supply chain management program ranks No. 3 nationwide in the specialty category for its field. The school also has several other programs in the top 30 – entrepreneurship at No. 19, management at No. 20, management information systems at No. 15 and marketing at No. 23.

ASU also is ranked 34th among the best colleges for veterans and No. 63 for the country’s top public schools. Among national universities overall, ASU moved up to 129 from last year’s ranking of 142 in the nation.

The ASU Ira. A. Fulton Schools of Engineering is also advancing among the best undergraduate engineering programs in the nation, at number 41 in the rankings, moving up from 43 last year.

Other notable milestones that ASU programs have earned through previously released U.S. News and World Report rankings include the W. P. Carey School of Business that ranked No. 2 in the nation for the best online graduate business program. U.S. News and World Report cites the school’s graduate business programs that are accredited by the Association to Advance Collegiate Schools of Business, the gold standard of business school accreditation.

Other recent top rankings recognizing excellence at ASU include:

• The Princeton Review ranked ASU one of the country’s top universities for undergraduate education in its 2015 edition of “The Best 379 Colleges.” The ranking puts ASU in the top 15 percent of all four-year colleges in America.

• ASU is ranked 88th in the world by the Academic Ranking of World Universities and 48th among all universities in the United States. Compiled by Shanghai Jiao Tong University, the rankings compare more than 1,000 higher education institutions worldwide and are considered one of the most prominent world university rankings.

• Arizona State University was named a “Military Friendly School for 2014” by G.I. Jobs magazine for five consecutive years. The list honors the top 15 percent of colleges, universities and trade schools that are leaders in providing educational support benefits and paths to success for military veterans. The university also ranked No. 14 on Military Times Edge magazine’s “Best for Vets” list.

Two ASU professors from the School of Earth and Space Exploration provided Congressional testimony in support of NASA’s planetary sciences program on Sept. 10.

Professors Jim Bell and Phil Christensen spoke about past successes and the continuing importance of exploring the solar system through NASA missions. They spoke before the Space Subcommittee of the Committee on Science, Space and Technology in the U.S. House of Representatives. 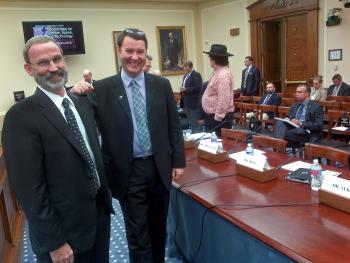 The hearing was held to review numerous issues facing NASA’s exploration of the solar system, including the agency’s recent and proposed budget levels for planetary science, low inventories of Plutonium-238 for deep space missions, and possible new directions for future commercial interactions between NASA and space-related companies.

NASA has had an active solar system exploration program dating back to the 1960s. The program has turned in a number of successes in exploring the planets and other bodies in the solar system, helping us to learn more about our own planet and how we got here.

Both Christensen and Bell said recent cuts to the agency’s Planetary Science Division have dramatically slowed the pace of new missions and future discoveries, and have created an air of uncertainty in the program.

“Planetary science has excellent opportunities for continuing the exploration of our solar system into the future,” said Christensen, an ASU Regents' Professor who has 35 years experience in NASA planetary science missions. “These opportunities have been clearly defined in the recent NRC Planetary Science Decadal Survey, ‘Vision and Voyages in the Solar System,’ and they remain the same today.”

However, “significant reductions in the level of funding for NASA’s Planetary Science Division from the previous decade have dramatically slowed the pace of new missions and future discoveries,” he added. “The lack of year-to-year stability in funding is having a serious impact on the ability to develop a long-term plan for planetary exploration.”

“The future of planetary exploration has been severely undermined by disproportionate cuts initiated by the administration in recent years,” added Bell, who is also president of the Planetary Society, the world’s largest public space advocacy organization. “These cuts have dramatically reduced NASA’s ability to explore the solar system, and have forced the United States into a unilateral retreat from (exploration of) both the outer and inner solar system.”

Both Bell and Christensen spoke of the past successes in learning more about Mars, exploring the icy, ocean moons of the outer solar system, and in getting the first close-up glimpses of asteroids as important scientific milestones that should not be ignored.

However, in recent years the program has had to deal with many proposed cuts.

Starting with the FY13 budget request, Bell said, the administration requested a 21 percent cut in NASA’s Planetary Sciences Division, and it continued to target planetary science in its FY14 and FY15 budget requests, with overall funding some $230 million less than the previous decade’s average of approximately $1.5 billion per year.

“It is a worthy investment,” Bell said, adding that it takes less than 9 percent of NASA’s total budget "to maintain a peerless program of exploration that inspires the country, reveals the mysteries of our solar system as well as our home planet, and searches for hidden abodes of life in the worlds around us.”

Because planetary science missions take several years to conceptualize, design, launch and explore, Christensen said funding consistency is of prime importance to the success of the program.

“The uncertainties that exist in the year-to-year levels of support have made long-term planning extremely difficult,” Christensen explained. “Planetary missions require many years, or even decades, to plan, develop, implement and operate. Without stable funding, it is very difficult to implement these long-term missions, with the result that missions are either not begun or their development is extended, with a resultant increase in mission cost.”

For Bell, who will lead development of the camera system on the Mars 2020 rover, the fact that the technology is there and the desire to learn more about our home planetary system is evident. We are at the dawn of a new age in space exploration.

“For the first time in human history, our ambition is no longer bounded by limits in technology, but by self-imposed limitations on resources,” he added.