An Arizona State University media team recently trekked to the Mesoamerican ruins of Teotihuacán with the goal of using high-end technology to capture the essence and magnitude of this ancient city, once one of the largest in the world.

Equipped with a GigaPan robotic camera mount and Stitch software, they were tasked with scouting and filming the locale in panoramic detail. The resulting footage from this expedition and others like it will be used to create videos for an upcoming museum exhibit at the site and an ASU Museum of Anthropology exhibit, and has the potential to be used for online field schools and courses. 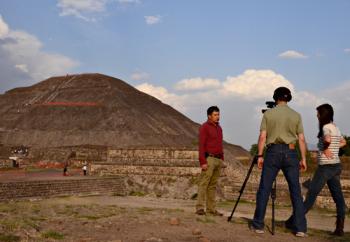 The lab is managed by ASU’s School of Human Evolution and Social Change in the College of Liberal Arts and Sciences and was established in the 1980s by professor emeritus George Cowgill, with assistance from the National Science Foundation and other sources. It houses myriad boxes of artifacts and other materials, most notably the data gathered during an extensive survey of the entire location done by the University of Rochester in the 1960s, in which Cowgill was instrumental. It also is one of the few research facilities near Teotihuacán and is frequently used by graduate students and researchers from a variety of international institutions.

The site offers “a unique opportunity for archaeology graduate students to collaborate with the Mexican [National] Institute of Anthropology and History,” explained Sugiyama, who began work at Teotihuacán in 1980.

Cowgill noted that, despite decades of active work at Teotihuacán, only about one-twentieth of the site has been excavated, and much analysis of recovered items – from ceramics to human remains – is still to be done, leaving a plethora of opportunities available for researchers, and marking the need for ventures like the ASU filming project.

Who built and lived in Teotihuacán remains a mystery, as does the reason for its eventual collapse in the seventh century. Teotihuacán – loosely meaning “where divinity comes into being” – is what the Aztecs called the metropolis when they discovered its ruins in the 14th century, leading many today to refer to it as “the City of the Gods.”

Sugiyama and Cowgill believe that understanding how the massive city developed, functioned and then declined can give insight into contemporary urban issues, as well as provide a window to our past. The continued relevance of the site is what has engaged them through the decades, bringing them back time and again, and making them trusted and near-constant figures in the local community of San Juan Teotihuacán.

Filming the “City of the Gods”

The team arrived in Teotihuacán just in time for the spring equinox, a busy day for visitors to this UNESCO World Heritage site that is believed to have cosmological significance. Fagan said the location, which once held around 100,000 people, is awe-inspiring, particularly its 1.5 mile-long central axis – the Avenue of the Dead – which is lined with enormous structures, including the renowned Pyramids of the Sun, Moon and Feathered Serpent.

“It’s impressive to see a city that large and preserved, with ancient ruins stretching into the modern city, and to know there’s still so much left to unearth that excavation could go on forever,” he marveled. Fagan, who works for ASU Public Affairs, has more than 10 years’ broadcast experience and is a current graduate student in ASU’s museum studies program. He plans to return to the site to continue documenting its layout, landmarks, major players and discoveries.

Already, two informational videos have been produced from this raw footage, one highlighting the ASU Teotihuacán Research Laboratory and the other capturing impressions of the site on the spring equinox. These are just the beginning. In the near future, the museum at Teotihuacán’s main entrance will be devoting half of its space to an exhibit by Sugiyama featuring a video-based review of discoveries to date and research projects presently in the works at the site.

The question of who owns water is addressed by the documentary "Flow," one of nine films to be shown during ASU's second annual Human Rights Film Festival, which coincides with Earth Day.

Of the 6 billion people on earth, 1.1 billion do not have access to safe, clean drinking water. And while the average American uses 150 gallons of water per day, those in developing countries cannot find five. Who owns water? Who gets to make decisions about who has access to water?

These are some of the issues addressed by the documentary “Flow: For Love of Water,” one of nine films to be featured at the second annual ASU Human Rights Film Festival coming up this weekend, April 20-22, on ASU’s Tempe campus. Coinciding this year with Earth Day, the festival’s Sunday lineup focuses on environmental rights. 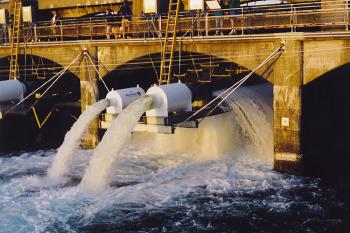 “The film questions the very nature of water and our relation to it," says Irena Salina, the film's director, who builds a case against the growing privatization of the world’s dwindling fresh water supply by focusing on politics, pollution, human rights, and water’s emergence as a $425 billion industry. "It shows how local action can challenge giant corporations, and how the privatization of water has jeopardized the way of life for entire populations.

“It was inspiring to learn that the most effective way to implement change around water issues, both here in the U.S.A. and abroad, are individual, community-based initiatives.”

A post-film discussion about “Flow” will be led by LaDawn Haglund, an associate professor of justice and social inquiry in ASU's School of Social Transformation, and a fellow in human rights and sustainability in ASU’s Lincoln Center for Applied Ethics. Haglund’s research analyzes the social and political dimensions of sustainability, particularly the human right to water. She is just returning from a Fulbright Research Fellowship in Brazil, where she studied courts as mechanisms for adjudicating the human rights to water and environmental protection.

The festival will close out with a film produced by a student workshop led by assistant professor Aaron Golub in ASU’s School of Sustainability. “Overcoming Eco-Apartheid: Community Action for Environmental Justice in South Phoenix” documents a community’s efforts to create visions and strategies for justice and sustainability, tackling issues of health, environmental justice, urban history and segregation, food security and neighborhood organizing. Joining Golub as film discussants will be Steve Brittle, president of Don't Waste Arizona, and Darren Chapman, director of the Tigermountain Foundation.

The other seven films that will run on Friday and Saturday are “Miss Landmine,” “Education Under Fire,” “Granito,” “The Truth that Wasn’t There,” “The Dark Side of Chocolate,” “The invisibles,” and “Stop Kony.” The festival is free and open to the public, and all films will be shown in the Great Hall of ASU’s Sandra Day O’Connor College of Law’s Armstrong Hall. For the full festival slate and listing of all film discussants, visit humanrights.asu.edu.

This year's festival is sponsored by Human Rights at ASU, the School of Social Transformation, the Graduate Professional Student Assocation at ASU, the Center for Law and Global Affairs in ASU's Sandra Day O'Connor College of Law, and Amnesty International Tempe.