In his 2013 State of the Union address, President Obama said that through a collaborative effort among the United States and its allies, the ability to end extreme poverty within the next two decades is a goal within reach.

On Sept. 18-19 in Washington, D.C., the second USAID Frontiers in Development Forum will bring together creative thinkers from around the world to build a coalition aimed at achieving this goal. 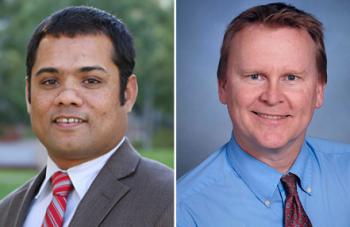 Arizona State University College of Public Programs professors Kevin Desouza and David Swindell will be a part of the collaboration in a new session sponsored by the U.S. Global Development Lab, the Innovation Marketplace. The event engages a broad audience with a focus on “the idea that science, technology, innovation and partnership can accelerate development impact and end extreme poverty by 2030.”

“While we have made great strides in leveraging technology and data for global development, we have undermined its potential due to an under-appreciation for governance and policy nuances,” says Desouza, who is also associate dean for research for the College of Public Programs.

He cites in the increase in open data movements and government transparency, and challenges that engage innovators to find ways to better use data analytics to solve complex problems as an opportunity to increase the impact of technology in development efforts.

At the conference, Desouza will discuss platforms for innovation.

“We will focus on how to create data-driven development labs to tackle some of our most vexing global challenges, such as the eradication of extreme poverty,” he says.

Swindell will focus on the challenge of a growing urban population in developing nations. The world population is expected to hit seven billion on or about Oct. 31.

“A key challenge to meeting the strains of growth is infrastructure, but that will not materialize without financing,” he says.

Swindell will share actionable tools – 28 innovative approaches to municipal financing – that are part of a report released by the Smart Cities Council and Swindell’s Center for Urban Innovation at ASU.

“We look at solutions that are both sustainable and resilient,” he says. “We can be creative in meeting these infrastructure challenges in a manner that increases physical, financial and environmental sustainability.”

For more information on Frontiers and the Innovation Marketplace, visit http://www.usaid.gov/frontiersindevelopment.

Educational tools developed at ASU will now be shared nationally through a new alliance of public universities coming together to boost the number of students from all economic backgrounds who earn a college degree.

Innovative educational tools and programs developed at Arizona State University will now be shared nationally through a new alliance of public universities coming together to boost the number of students from all economic backgrounds who earn a college degree.

ASU has announced that it will be a founding member of the University Innovation Alliance, an unprecedented coalition of public universities aimed at sharing interventions that enable low-income and first-generation college student success. 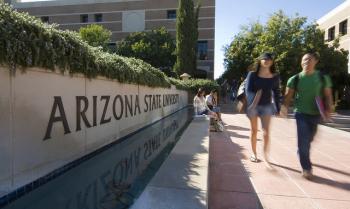 “There is a lot of talk about disruption in higher education," said ASU President Michael M. Crow, chairman of the alliance. "We think that the real disruption will come through collaboration. Colleges, typically, are forced to compete for students, research support and top spots on college rankings. While there are many institutions that have come up with creative solutions to some of our sectors' most urgent problems, those ideas rarely travel far from where they are hatched.

"This alliance will create a space where university leaders can come together and learn from one another, and all of us will benefit as we share, adapt and scale up ideas that have been proven to help students from all backgrounds.”

This alliance comes at a critical turning point in history, as the American workforce faces a shortage of college graduates that is projected to grow to 16 million by 2025, and poverty rates for Americans 25 years and older with no college education are three times higher than rates for those with at least a bachelor’s degree. Currently, high-income students are seven times more likely to attain a college degree than low-income students.

Arizona State University brings to the alliance leading innovation tools, such as eAdvisor, that enable students to explore majors, map their classes and track their progress to completing a degree. Since eAdvisor’s implementation, the four-year graduation rate of the first class to use the system in 2008 improved by more than 9 percentage points, and the 2009 cohort already has achieved a four-year graduation rate of 12 percentage points higher than before eAdvisor was implemented.

A critical driver of eAdvisor and other related initiatives has been improving the success of lower-income students. The four-year graduation rate for resident students coming from families making less than $50,000 per year increased from 26 percent in the 2006 class to 41 percent in the 2009 cohort.

ASU is committed to expanding access to match Arizona's racial, ethnic and socioeconomic diversity, and the university has dramatically increased the number of minority students it graduates. At the bachelor’s degree level, the university saw an increase of 1,734 to 4,214 graduates from 2002-2003 to 2012-2013, a 143 percent increase. For graduate degrees, the increase was from 444 to 1,009 graduates, a 127 percent increase. This school year, more than 61,000 students are receiving financial aid.

Additional initiatives that have bolstered success and provided access for low-income students at ASU include:

• Obama Scholars Program, which provides funds for students from lower-income families. The program extends the university’s commitment to provide educational opportunities to Arizona’s high-achieving students through a variety of aid sources that cover students’ costs of attending ASU.

• Access ASU, which prepares Arizona students for the university through collaboration with school administrators and educators. Access ASU engages students and their families through outreach programs such as Future Sun Devil Families, the Hispanic Mother-Daughter Program and the American Dream Academy.

• Student-centric education initiatives, such as an interactive computerized system that helps students with math on an individual level diagnose areas that need attention. Similarly, the university’s English program focuses on students in redesigned sections of freshman writing who can work at individualized rates.

The founding members of the University Innovation Alliance have raised $5.7 million dollars to facilitate the endeavor. Funding support for the alliance comes from major foundations that will be matched by the universities: Ford Foundation; The Bill and Melinda Gates Foundation; Lumina Foundation; Markle Foundation; Kresge Foundation; and USA Funds.