When a panel of experts asked to fix the military’s problem with sexual assaults needed someone to put the issue into context, it turned to Cassia Spohn, a professor in the School of Criminology and Criminal Justice at Arizona State University.

The Response Systems to Adult Sexual Assault Crimes Panel is conducting an assessment of the methods used to investigate and prosecute sexual assault crimes and related offenses within the military. The goal is to develop recommendations to improve the effectiveness of how the military justice system handles sexual assaults. 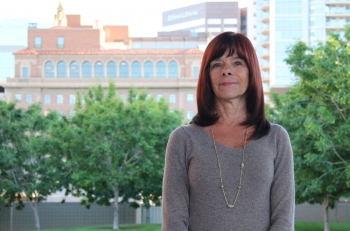 Spohn, a foundation professor and director of the doctoral program at the ASU School of Criminology and Criminal Justice, spoke to the panel at a meeting held at the University of Texas at Austin on December 12, 2013. Spohn has spent two and a half decades researching processing decisions on sexual assault cases. Most of her work has focused on how prosecutors charge cases, but one of her recent research projects involved examining the processing of cases by law enforcement officers in Los Angeles.

During Spohn’s one-hour presentation, titled “Statistical Analysis of Waterfall Slides,” she cautioned that comparing the two different systems of justice would be difficult. The type of military cases labeled as sexual assault included ones that involved touching, but not rape, whereas the civilian cases were limited to rape cases.

"The problem with making comparisons across civilian and military jurisdictions is that the the military services use a much more all-encompassing term, that is sexual assault, that includes both penetration and contact offenses," Spohn told the panel. "And what this means, of course, is that comparing numbers across these two systems, and more importantly, comparing changes over time is difficult, and the results of those comparisons may be misleading."

Spohn noted that military services data are more comprehensive and include the outcome of allegations for each of the branches of service, such as whether there was an arrest in a case and whether the arrest resulted in prosecution and conviction.

“By contrast, there are are no national data on outcomes of civilian cases that resulted in an arrest.”

A factor that complicated a thorough examination of military cases was the definitions used to describe the outcome of cases. One term in particular stood out – unfounding. FBI Uniform Crime Reporting guidelines suggest an alleged crime can be unfounded only if an investigation determines it to be false or baseless. In the civilian system, Spohn said if an investigating police officer doesn’t believe a victim’s story and concludes a crime did not occur, the case is called “unfounded.” But she pointed out that some “unfounded” cases in the civilian system involve victims whose stories are believed, but the likelihood of conviction is low.

By comparison, in the military system, if a criminal investigation determines that the individual accused of sexual assault didn’t commit the offense, or it was improperly reported or recorded as a sexual assault, the allegations against the suspect are considered to be unfounded. Spohn found who decides to unfound the case also differs. In the civilian justice system, that decision is made by police. In the Army, prosecutors have the responsibility, while base commanders make that determination in other service branches.

“And so not only are the definitions of unfounding different, but the procedures that are used to unfound cases are different as well,” Spohn said.

The ASU professor told the military panel that in the 1990s, data reported to the FBI estimated about eight percent of rape complaints were unfounded. Spohn’s own research with another criminologist found that rate was almost 11 percent for Los Angeles Police Department sexual assault cases they studied from the years 2005 to 2009.

“This is substantially higher than the eight percent rate reported by the FBI for forcible rape during the 1990s, but we have to keep in mind that the term sexual assault as used by the military includes offenses other than forcible rape,” said Spohn. “Thus, the rates are not directly comparable since they do include these touching offenses as well as the penetration offenses.”

“So in an attempt to sort of summarize what all of this means, there are problems with determining both the denominator and the numerator, and this makes calculating rates – particularly for the military services – difficult, and it makes making comparison across systems somewhat problematic,” Spohn told the panel. “With these important caveats in mind, the rates appear to be somewhat lower for the military system. The overall military rate is 36.8 percent if we think of prosecution as court-martial charges divided by subjects in cases in which DOD (Department of Defense) action is possible.”

Spohn found a comparable prosecution rate for the civilian system was 50 percent.

"I think that one thing that should be done is there should be some kind of analysis to determine why the unfounding rate is higher for the Department of Defense than for civilian jurisdictions," Spohn said. "This would involve a case file review that would be designed to determine if cases that are unfounded are, in fact, false or baseless, or if unfounding is being used to dispose of what might be referred to as problematic cases."

The ASU criminologist advised the panel addressing sexual assaults in the military that cases that are not prosecuted, or that result in dismissal or acquittal, should also be examined. Spohn said there ought to be attention paid to the role of victim cooperation or lack of victim cooperation.

“Research in the civilian justice system reveals that this is a key factor in cases handled by the civilian court system,” said Spohn. “But I would argue that a related research question would be why do victims decide not to cooperate with the prosecution of the case?”

The Response Systems to Adult Sexual Assault Crimes Panel will submit its findings to the Armed Services Committees of the Senate and House of Representatives through the General Counsel of the Department of Defense and Secretary of Defense. The panel’s final report is expected in December of 2014.

CGI U is coming to Tempe: 5 things you need to know

ASU will host the Clinton Global Initiative University March 21-23. Here is what you need to know.

CGI U is coming to Tempe: 5 things you need to know

On March 21 more than 1,000 student leaders from across the globe will land at ASU's Tempe campus for three days dedicated to taking action in solving some of the most pressing concerns of the Millennial generation, as part of the seventh annual meeting of the Clinton Global Initiative University (CGI U).

The ASU community – students, faculty, staff, alumni and surrounding community – will play a role in this important event.

Here's what you need to know:

1. The Clintons are coming.

2. A public session is slated for opening night.

The opening plenary session, open to the public, is slated for Friday, March 21, at Gammage Auditorium.

Remarks for this session, titled "The Age of Participation," will be given by Former Secretary of State Hillary Rodham Clinton and ASU President Michael M. Crow.

Learn more about what will be discussed.

Arizona State University was selected to host the Clinton Global Initiative University because of its commitment to student-driven social change and entrepreneurship.

Approximately 200 ASU students are taking part in this year's meeting, and hundreds more will ensure the event runs smoothly by volunteering their time throughout the weekend.

Many ASU students, faculty and staff already are hard at work on a variety of initiatives that reflect the five focus areas of the Clinton Global Initiative, which are: education; environment and climate change; peace and human rights; poverty alleviation; and public health.

CGI U attendees must create Commitments to Action – new, specific and measurable plans to address global challenges – in one of these five areas.

5. Day of Action in Phoenix

A day of community service will take place Sunday, March 23, in downtown Phoenix – hosted in part by PHX Renews, a partnership between the City of Phoenix and Keep Phoenix Beautiful. Participants will work in conjunction with nearly one dozen community organizations on a wide array of volunteer activities, ranging from urban agriculture to mural painting.

You can also follow the action March 21-23 on Twitter, using hashtag #cgiu, and also see updates on ASU News.