Growing up in a tiny town on the Navajo reservation, Laura Tohe relied on comics, fairy tales and books to stimulate her mind — even if that meant a four-hour round-trip drive to the nearest library.

“Since we didn’t have television, reading was a way out of the rez for me,” said Tohe, an English professor in Arizona State University’s College of Liberal Arts and Sciences. “Books took me to other places in the world and to other time eras.” 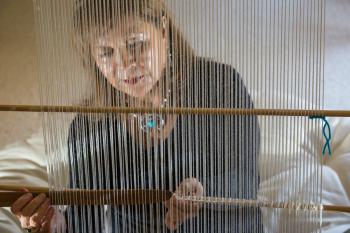 Arizona State University English professor Laura Tohe is being named the poet laureate of the Navajo Nation for 2015-2017. She finds writing to be like weaving; she’s continuing the legacy traditions of her mother, aunt, grandmother and great-grandmother, using some of their tools as well. Here she weaves in her Mesa home on July 13. Photo by: Charlie Leight/ASU News Download Full Image

Today, the Tohe era will commence when she is named the new poet laureate of the Navajo Nation at an official ceremony in Crownpoint, New Mexico. Tohe succeeds Luci Tapahonso, who was named the nation’s first ever poet laureate in 2013.

The goal of designating a chief poet is to encourage other Navajo writers and artists and to underscore their contributions to Navajo culture.

Tohe has already contributed much to the Navajo Nation and the literary world.

She has written four books, published hundreds of poems and has had several translations of her work ­­— including into dance and music. In 2008, Tohe wrote the commissioned libretto for “Enemy Slayer: A Navajo Oratorio” for the Phoenix Symphony.

Tohe credits a vivid imagination and the lack of a family television to her success.

“I was introduced to reading with the ‘Dick and Jane’ series at school,” she said. “I gravitated to fairy tales, and when my mother could afford it, she bought me ‘Little Lotta,’ ‘Richie Rich’ comics and later my brothers reluctantly let me read their comics — ‘Superman,’ ‘Batman’ and others.”

Tohe grew up on the reservation in Crystal, New Mexico, near the Chuska Mountains on the eastern border of the Dine/Navajo homeland. The town’s population hovered just above 300 people, and outside of attending school, there wasn’t much to do. Storytelling was not only a way to pass the time, but an art form among her people.

“One time I drove with my grandparents down Highway 666, and they recounted all of the places where a relative died or some incident happened. It was a highway of stories,” Tohe said. “I grew up with an oral tradition, and that has been my biggest influence in developing my voice and my work as a poet and writer. ‘You don’t have anything if you don’t have stories,’ is what my mother used to say.”

Tohe said as a child she told such captivating stories that a family friend would come over to listen to her when she’d go on a tear. Her stories eventually grew into poetry and sometimes prose poetry.

“Dine people, like many indigenous peoples, have always had great reverence for language, for sacred words and how they are used in meditations,” Tohe said. “For example, prayers and song meditations are used to heal and restore health and wellness for someone suffering from a certain illness. It can also uplift the human spirit.”

In her duties as poet laureate, Tohe wants to help uplift the Navajo people, specifically the next generations.

“I would like to see our younger generation continue the tradition of writing poetry, what we call ‘Saad Naazhch’aa,’ which translates to ‘pictures with words,’ ” Tohe said. “We didn’t have a word for poetry a few years ago. Since our language has diminished with the boarding-school era, poetry can be one of the ways to revitalize and save the Navajo language.”

Our digitally dependent world generates vast amounts of data, and companies' need to dig through the info is only increasing – which is why the W. P. Carey School of Business' analytics degree programs are becoming more and more popular.

In the 10-minute span that a student buys a cup of coffee, tweets a photo of her lunch and then logs onto her online course, she generates data.

Multiply that by millions of users every day, and companies like Twitter can harvest 10 terabytes of data — enough to hold the contents of the entire Library of Congress. 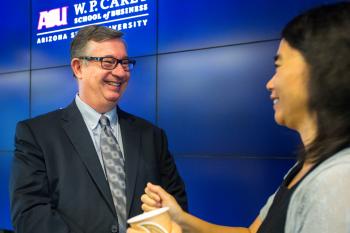 Michael Goul talks with a supporter after a reception for the Center for the Study of Economic Liberty at the W. P. Carey School of Business on Sept. 10. Goul, associate dean for research at the school, says the kind of insight involved in business analytics demands creativity, making analysts much more than number crunchers. Photo by: Charlie Leight/ASU News Download Full Image

Businesses are eager to mine that data to maximize efficiency, customer satisfaction and profit. Which means they also need business analysts to swim through the oceans of information.

It’s one reason why the Harvard Business Review said that business analyst is the "sexiest job of the 21st century." The U.S. Bureau of Labor Statistics predicts the field will have a 22 percent increase in positions by 2020.

Arizona State University is feeding that boom. The program in the W. P. Carey School of Business has seen enrollment in its master’s of business analytics degree program triple in the three years it has been offered — from 54 in 2013 to 154 this year.

ASU added an undergraduate program in analytics in 2014 and an online master’s degree program this year.

The degrees provide corporations like Google and Netflix people who can create algorithms that smash the numbers and reveal the nuances of consumer behavior. The results can illustrate things like how to find the best match to an online search or recommend the best movies for specific customers to watch.

Companies like Google and Netflix provide some popular examples, but all businesses will need to excavate the information generated by their websites, social media, credit-card transactions — even security cameras — just to keep up with the competition.

“Looking at the data can give a company an insight into how their strategy might have shifted and how the reality is different from the folklore that the people who started the organization based it on,” said Michael Goul, associate dean of research at the W. P. Carey School of Business.

ASU’s analytics degree program was driven by the W. P. Carey School’s industry advisory board, which regularly provides feedback on trends and needs.

Neeraj Madan saw it too. He was working as a consultant with IBM in India when he realized that his approach to solving problems was changing.

“The clients can say a lot of things about the problems, but it’s always the data that has the real story,” he said.

Madan took a sabbatical from IBM and earned a master’s in business analytics at ASU earlier this year. He worked on a project analyzing five years’ worth of data about bicycle thefts on campus and made recommendations to the police about the best times to patrol.

“We told them the 20 hot spots where they could focus their energies,” he said.

Madan, who now works for IBM in Phoenix, said his degree work at ASU has changed his outlook.

“Everywhere around me now, I look for patterns,” he said.

For example, one group of ASU students looked at sales of water and compared it with weather, finding that hurricanes and high temperatures correlated to higher sales.

“But then they found out that it’s not the actual temperature that does it. It’s the forecast,” Goul said. “Analytics is not pure ‘what are your sales’ and ‘what’s your inventory.’ It’s innovation.”

Goul said the field is changing so rapidly that ASU has already had to adjust, hiring faculty with experience in the health field, which is embracing big data fields like genomics, analyzing the functions and structure of genomes. Much of the data will be generated by things, not humans.

“Our next generation of products will have Internet capabilities like our phones do. Our glasses or pacemakers will be ‘phoning home’ with continuous, real-time information and adjusting on the fly,” Goul said.

Even though giant “data lakes” are being filled continuously, businesses are still trying to figure out what to do with all that information.

And these stakes are higher than choosing a good movie, like when “smart machines,” such as robots or driverless cars, are making the decisions.

Even though data is everywhere around us these days, the field of data analytics is still so new that accrediting bodies are just now determining how to make sure universities are offering the best curriculum, Goul said.

“I like to call it the world of data science cowboys.”