ASU and Phoenix College’s Medical Laboratory Science (MLS) Partnership Program plans to expand as a result of a decision by the Maricopa County Community College District Governing Board to approve the purchase and modernization of a building valued at $2.9 million. The proposed property purchase for Phoenix College will enable the expansion of and improvements in lab facilities of Allied Health and Dental Programs of which MLS is a part.

Today more than 70 percent of medical decisions made by physicians are based on laboratory findings and the medical laboratory professionals collecting the information needed to make these decisions play a critical role in health care, according to Julie Stiak, Phoenix College program director for the MLS Program. Despite the need for lab services, the U.S. currently faces a health care professional shortage in this area as a result of an aging work force and the recent closure of laboratory science programs according to the National Accrediting Agency for Clinical Laboratory Science. 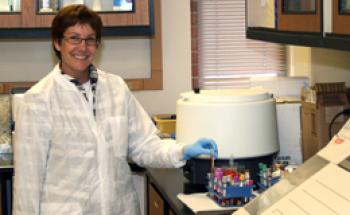 “Currently students in rotations as interns are required to spend six months in a clinical practice setting. Building a simulation lab and virtual training facility will reduce hours students need to spend in the clinic and allow for increased enrollment,” according to Jeff Wolz, ASU program director. “It is often difficult to place students in a clinical setting because hospitals lack resources to train students and the expansion will address this bottleneck.” added Stiak.

The collaborative ASU/PC program is unique in using innovative learning technologies in a hybrid delivery model. Students earn an Associate of Applied Science in Medical Lab Science from Phoenix College with the option of continuing on to complete an ASU degree, the Bachelor of Applied Science in Medical Laboratory Science, with 90 credits from Phoenix College and 30 credits from ASU. Both of these degrees are earned on the Phoenix College campus through hybrid delivery and video conferencing. The program directors point out that at this time there are no comparable MLS degree offerings in the country and the partnership includes shared faculty and equipment, making it a cost effective option for students seeking high quality associate and bachelor degrees.

The expansion, expected to be completed by 2014, will allow the program to meet the growing number of applicants.  “Applicants generally gravitate to the MLS program because they have an interest  in working in a medical field and want to play an integral role in patient care, but prefer to work behind the scenes,” said Wolz. Some students find the field by default, such as biology students looking for a career where they can apply knowledge, according to Stiak.

The Bachelor of Applied Science in Medical Laboratory Science program in ASU’s School of Nutrition and Health Promotion has existed for two years and recently graduated the first cohort of 18 students in spring 2012. The average salary for a medical lab scientist is $54,400, according to the American Society of Clinical Pathology. The Labor Department projects faster than average job growth; with the number of clinical lab workers increasing at 16 percent between 2008 and 2018, adding 25,000 jobs.

The Medical Lab Science program was recently recognized as the 2012 Innovation of the Year for the Maricopa County Community College District.

Competition concluded for Sun Devils past and present on Saturday night as the final Arizona State alumni and student-athletes finished competition at the U.S. Olympic Track and Field Trials in Eugene, Ore.

Competition concluded for Sun Devils past and present on Saturday night as the final Arizona State alumni and student-athletes finished competition at the U.S. Olympic Track and Field Trials in Eugene, Ore.

In her first appearance at a U.S. championship, junior Keia Pinnick finished the heptathlon competition with a strong 13th-place finish overall with 5,752 points.  Over the course of the two day event, Pinnick set a new career-best in the high jump with a clearance of 1.69m (5-06.50) and also posted a heptathlon personal best of 6.02m (19-09.00).

Pinnick rounded out the competition by winning the 800-meter portion of the event with a time of 2:11.98.

In other action at Hayward Field on Saturday, senior Chris Benard wrapped up his career as a Sun Devil with an 11th-place finish in the men’s triple jump and a leap of 16.00m (52-06.00).  Benard finished his career as a two-time All-American (two first team, one second team) and holds the school record in both the indoor and outdoor triple jump.

Friday’s competition saw several Sun Devils in action as well, beginning with Sarah Stevens-Walker.  The 15-time All-American took fifth overall in the women’s shot put competition with a throw of 17.97m (58-11.50) in an extremely competitive field that saw six competitors over the 58-foot mark.

For Stevens-Walker, that throw was not quite enough to crack the America throwing squad and she will not advance to London.

Another alumnus just missing out on Friday was Lisa Aguilera in the women’s 3,000m steeplechase.  Aguilera was fifth overall as well in a time of 9:41.85 and was just six seconds shy of the third and final qualifying spot.

In the women’s 400-meter hurdle semifinal, alumnus Latosha Wallance came as close to advancing as she could possibly get without moving on after finishing ninth overall in 55.78 – just one thousandth of a second off the time needed for the eighth and final spot for Sunday’s final.

Alumnus Charonda Williams also failed to advance in the 200-meter semifinal after clocking the 13th-best time in 22.98.   Williams did, however, make it to the semifinals of both the 100 and 200-meter runs in a field stacked with premiere athletes.

At the Canadian Olympic trials, junior Christabel Nettey finished second overall with her wind-aided jump of 6.44m (21-01.50).  Nettey, however, does not have the Olympic ‘A’ Standard in the event and will not advance to London despite the finish.

No Sun Devils are slated to compete on Sunday, which is the final day of the U.S. Trials.  With that in mind, the team will be sending four alumni to London next month.  Desiree Davila was the first to punch her ticket back in January with her qualification in the marathon.  At the U.S. Trials, shot putter Ryan Whiting, 10,000m specialist Amy Hastings and steeplechase Kyle Alcorn all made the roster heading to London.