Arizona State University is partnering with the U.S. Virgin Islands to assist in the development of renewable energy practices in the island territory, as well as invigorate the renewable energy market and expand upon energy education. The partnership, a product of ASU’s dedication to sustainability and global engagement, will unite world-class faculty from ASU with U.S. Virgin Islands leaders in a common mission to transform the way in which renewable energy resources are used in the U.S. Virgin Islands.

“We are excited to be partnering with the U. S. Virgin Islands and to help them develop new renewable energy practices and expand upon energy research and education,” said Sethuraman “Panch” Panchanathan, senior vice president of Knowledge Enterprise Development at ASU. “This collaboration is a great opportunity for the university to work side by side with the Virgin Island leaders, utilities and university to create solutions to sustainability challenges that face our communities locally and globally.”

This partnership is designed to help the island territory advance upon its goal of reducing its fossil fuel consumption in 2025 by 60 percent from its 2009 baseline. The Virgin Islands is pursuing a combination of renewable energy and energy efficiency deployment.

“The value created by this partnership provides the various agencies of the government with the responsibilities for energy efficiency and conservation, waste management, energy education and entrepreneurship, and expansion of our renewal energy platform with an institution that can provide, in one location, research capabilities and practical applications that allow for implementation in a reduced time frame," de Jongh said. "We have established a strong foundation, and based on the work already done by the Energy Office, WAPA, Waste Management and the university, we are ready to execute plans that will benefit our community [in] areas that have long been discussed."

Arizona State University has made a commitment to energy generation and sustainable practices by aiming to achieve carbon neutrality by 2025. The university has installed more than 78,000 solar panels across its campuses, initiated energy conservation standards for each of its buildings and made utility infrastructure upgrades, among many other accomplishments.

To shave or not to shave? That's the question confronting students in classes taught by Breanne Fahs, associate professor of women and gender studies in ASU's New College of Interdisciplinary Arts and Sciences.

To shave or not to shave?

That’s the question confronting students in classes taught by Breanne Fahs, associate professor of women and gender studies in ASU’s New College of Interdisciplinary Arts and Sciences. Since 2010 Fahs has offered students the chance to participate in an extra-credit exercise related to body hair. 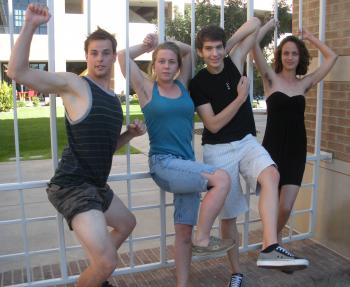 Female student participants stop shaving their legs and underarms for 10 weeks during the semester while keeping a journal to document their experiences. For male students, the assignment is to shave all body hair from the neck down.

“There’s no better way to learn about societal norms than to violate them and see how people react,” said Fahs. “There’s really no reason why the choice to shave, or not, should be a big deal. But it is, as the students tend to find out quickly.”

Stephanie Robinson declined to participate in the project during the first two classes she took with Fahs, but took the plunge during her third opportunity. “It really was a life-changing experience,” she said.

“Many of my friends didn’t want to work out next to me or hear about the assignment, and my mother was distraught at the idea that I would be getting married in a white dress with armpit hair,” Robinson said. “I also noticed the looks on faces of strangers and people around campus who seemed utterly disgusted by my body hair. It definitely made me realize that if you’re not strictly adhering to socially prescribed gender roles, your body becomes a site for contestation and public opinion.”

Robinson says part of her motivation for deciding to participate in the exercise was that in previous semesters she felt left out of the sense of the camaraderie of the students who were all bonding over their body hair, or lack thereof for males in the class.

“It’s interesting how peer pressure within the class can create a new norm,” Fahs said. “When practically all of the students are participating, they develop a sense of community and enjoy engaging in an act of rebellion together.”

That act of rebellion isn’t quite the same for males as females, according to Fahs. It’s not uncommon in our society for some men to engage in “manscaping,” removing hair from some parts of their bodies. For the extra-credit assignment, she asks male students to shave everything below the neck and maintain it for 10 weeks. This makes the process labor-intensive and gives men some insight into what women who shave go through, she said.

Some male students have come up with strategies to add a “macho” element to the project. “One guy did his shaving with a buck knife,” Fahs said. “Male students tend to adopt the attitude of, ‘I’m a man; I can do what I want.’”

“Although a co-worker questioned why I shaved my legs, I felt comfortable in my own skin,” says a former male participant, Kurt Keller. “It helped having classmates who were so willing to lay it on the line too.

“I think shaving is an expectation that partners can place on each other because of personal taste,” Keller said. “However, just because a boyfriend or girlfriend pressures you to shave, it must be your own decision. I really hope that people, including myself, can treat our bodies with respect, regardless of relationship expectations. If your partner expects you to do something that feels unnatural, at that point there needs to be a separation, or at least a discussion.”

Fahs said there’s more of a tendency on the part of women who stop shaving to be concerned about the reaction of their romantic partner. Men who shave tend to focus more on what other men think. Both genders bump up against sexism and heterosexism in their experiences, albeit in different ways, she explained.

Student Grace Scale once dated a man who decided one evening to tell her about all the things he “hated” about her body, including the hair on various parts of it. “This was the first time that anyone had critiqued my body in such a way, and I didn’t even have to think twice about the following breakup,” she said.

Scale says she was surprised by the strong reactions of some of her male friends during the 10 weeks. “One of my dearest friends – at the time – compared my underarm hair to ‘the sludge in the bottom of the garbage can,’ and continued on a rant about how growing body hair had a direct correlation to challenging men’s authority and position in society.”

Jaqueline Gonzalez credits the body hair project with helping to shape her into the activist she is today. “The experience helped me better understand how pervasive gendered socialization is in our culture,” Gonzalez said. “Furthermore, by doing this kind of activist project I was no longer an armchair activist theorizing in the classroom. So much is learned by actually taking part in the theory or idea we learn in the classroom, and we could benefit from this type of pedagogy being taken up by similar classes.”

Gonzalez isn’t the only person who believes projects like this should be implemented elsewhere. “I’ve been surprised by the amount of positive feedback I have received,” Fahs said. Faculty members at other universities are considering using the exercise in their classes. Fahs said she looks forward to seeing how the exercise works in other settings. “There is a big difference between imagining not shaving and actually trying to not shave,” she said.

And the American Psychological Association was so sufficiently impressed with the body hair exercise that the organization gave Fahs the Mary Roth Walsh Teaching the Psychology of Women Award through Division 35 in 2012. She has had papers about the project published in academic journals, including Feminism & Psychology, Psychology of Women Quarterly and Gender & Society.

Fahs earned her doctorate in women’s studies and clinical psychology from the University of Michigan. Her research interests focus on themes of women’s sexuality, critical body studies, radical feminism and feminist histories, and social movements and political socialization. Fahs teaches New College courses, including Critical Perspectives on Sexuality, Psychology of Gender, and Race, Gender and Class. She has also developed some unique upper-division courses that examine topics as diverse as hate speech and manifestos, gendered bodies, and the philosophical and literal dimensions of trash.

New College’s bachelor’s degree program in women and gender studies (with BA and BS degree options) is an interdisciplinary program emphasizing intersectional approaches to the study of gender, race, class, ethnicity and sexuality in national and transnational contexts. The program seeks to further the understanding of women and gender, and to promote social justice. New College is the core college on ASU’s West campus.