There won’t be any taxi drivers in the future. Or limo drivers. Or truck drivers.

Thanks to technology – in this case driverless vehicles – employment in America is changing. 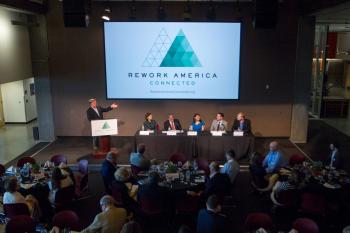 And transportation is not the only industry affected.

“One recent study said that as many as 40 percent of American jobs are subject to disruption of technology," said Zoe Baird, CEO and president of the New York-based Markle Foundation, which aims to help the spread of knowledge to all Americans. "So it’s really our responsibility, and the responsibility of those people who are community leaders, to help people get through this transition and get to the other side.”

The project was announced June 24 by Baird, ASU President Michael M. Crow and city, state and corporate leaders at a press conference in downtown Phoenix.

“We’re here because we’re at that moment where the new economy is being born as we speak,” said Crow of the initiative.

Rework America Connected is launching in the Phoenix metropolitan area and the state of Colorado – two regions of the U.S. with a fine track record of employment innovation and trying to make the lives of their people better.

And while the partnership might sound like another website or app that promises to help people find work, members of the panel underscored that Rework America Connected is not looking to be just a technology solution.

“It’s a whole enterprise where technology can help interweave the pieces,” said Baird.

The fine details of Rework America Connected are still being developed. The players know they want to create a platform that can do everything from helping someone climb the employment ladder to providing better pathways to education to highlighting the future skills educators need to teach their students.

As LinkedIn co-founder Allen Blue said, it’s about allowing people to change their own employment narratives.

Rework America Connected will rely on ASU and employers in the Phoenix metro area to share employment data and professional experiences that can help the program be more effective.

“We hope that from today we will begin to build a really strong collaboration that will both work for individuals to get them on strong career paths and work the businesses in this community in order to enable them to have the best work force in America,” Baird said.

“We believe that we can take the negative edge off this economic transition and create economic opportunities,” Crow said.

Discoveries by an ASU engineering research team about the causes of cracking in metal alloys could help prevent failure of critical infrastructure systems.

Sometimes looking at something at the smallest scale can lead to solutions to big problems.

A recent study into the interactions of metal alloys at the nanometer and atomic scales is likely to aid advances in preventing the failure of systems critical to public and industrial infrastructure. 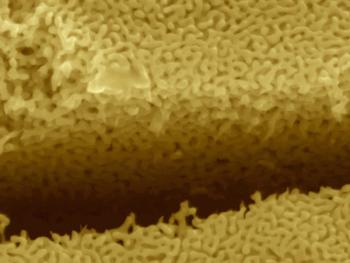 The image shows corrosion of a silver-gold alloy spontaneously resulting in the formation of nanoscale porous structures that undergo high-speed cracking under the action of a tensile stress. It helps demonstrate a discovery by an Arizona State University research team about the stress-corrosion behavior of metals that threatens the mechanical integrity of engineered components and structures. Download Full Image

Research led by Arizona State University materials science and engineering professor Karl Sieradzki is uncovering new knowledge about the causes of stress-corrosion cracking in alloys used in pipelines for transporting water, natural gas and fossil fuels – as well as for components used in nuclear-power-generating stations and the framework of aircraft.

Sieradzki is on the faculty of the School for Engineering of Matter, Transport and Energy, one of ASU’s Ira A. Fulton Schools of Engineering.

His research team’s findings are detailed in an advance online publication June 22 of the paper “Potential-dependent dynamic fracture of nanoporous gold” on the website of the journal Nature Materials.

Using advanced tools for ultra-high-speed photography and digital image correlation, the team has been able to closely observe the events triggering the origination of stress-corrosion fracture in a model silver-gold alloy and to track the speed at which cracking occurs.

They measured cracks moving at speeds of 200 meters per second corresponding to about half of the shear wave sound velocity in the material.

This is a remarkable result, Sieradzki said, given that typically only brittle materials such as glass will fracture in this manner and that gold alloys are among the most malleable metals.

In the absence of a corrosive environment, these gold alloys fail in the same manner as children’s modeling clay, Sieradzki explained: Roll modeling clay into a cylindrical shape and you can stretch it by about 100 percent before it slowly tears apart. In the presence of corrosive environments, silver is selectively dissolved from the alloy causing porosity to form (see photo). If this occurs while the alloy is stressed, the material fails as if it were made of glass.

These results provide a deeper understanding of the stress-corrosion behavior of such metals as aluminum alloys, brass and stainless steel that threatens the mechanical integrity of important engineered components and structures.

The team’s discoveries could provide a guide for “designing alloys with different microstructures so that the materials are resistant to this type of cracking,” Sieradzki said.

The research has been funded by the Department of Energy’s Basic Energy Science program.

His co-authors on the Nature Materials paper are former or current ASU materials science and engineering graduate students: Shaofeng Sun earned her doctoral degree in 2013; Xiying Chen is a third-year doctoral student; and Nilesh Badwe earned a doctoral degree earlier this year.