To achieve the goal of climate neutrality by 2025 – defined as having no net climate impact resulting from carbon or other greenhouse gases – Arizona State University has announced a strategic partnership with Ameresco, Inc., the largest independent energy services-solutions provider in the nation, and Rocky Mountain Institute (RMI), an independent nonprofit working to transform global energy use.

The partnership marks the beginning of a 22-year-long collaboration toward developing a strategic roadmap for climate neutrality and identifying innovative projects and initiatives that will further ASU’s position as a national leader in sustainable universities. The energy services giant is also partnering with RMI to facilitate collaborative workshops and evaluate emerging technologies and innovative financing structures. 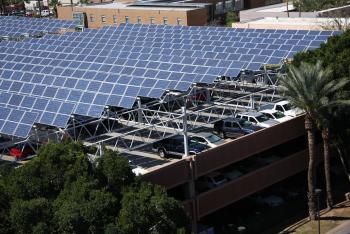 “Arizona State University, Ameresco and RMI serve as living laboratories for ideas and experiments that are transforming the world in varied and meaningful ways,” said ASU President Michael M. Crow, co-chair of the American College and University Presidents’ Climate Commitment (ACUPCC) steering committee and one of the original signatories of the commitment.

“The partnership will not only support ASU in reaching our institutional climate neutrality goals, but also affect the fundamental way in which more than 85,000 members of our community approach sustainable living," Crow said. "We hope this effort creates a ripple of similar commitments from other institutions of higher learning, communities and future generations of environmentally aware citizens across the globe.”

“Ameresco is delighted to partner with this leading university committed to global sustainability,” said Ameresco President and CEO George P. Sakellaris. “Our alliance supports ASU in reaching climate neutrality status and establishes a great example for other institutions and businesses to follow. In addition, we expect a secondary effect of our partnership to foster a revolutionary impact on society and the environment for years to come.”

The master agreement encompasses three initial primary objectives. Ameresco and RMI will first craft a climate neutrality implementation plan, which will provide the framework for the duration of the 22-year partnership. The second objective is identifying additional sources to fund the implementation of the plan. Lastly, Ameresco and RMI will conduct technical climate assessments that will help identify projects to significantly reduce climate emissions across all campuses.

"RMI is excited to work with ASU and Ameresco to create a real-world example of Reinventing Fire, RMI's roadmap for getting the U.S. off coal, oil and nuclear energy by 2050, using efficiency and renewables," said Amory Lovins, co-founder and chief scientist of RMI. "Campuses are microcosms of our communities across the country. This bold project can inspire similar efforts and catalyze a powerful movement with the potential to reinforce deep and broad energy efficiency as both an economic driver and an environmental opportunity."

Nick Brown, the director of University Sustainability Practices and senior sustainability scientist at the Global Institute of Sustainability, said that ASU has made important strides toward climate neutrality and that the unique ASU-Ameresco-RMI partnership is poised to fulfill the goal successfully.

“We’ve completed about a quarter of the work toward a zero-climate footprint through our solarization program, energy savings performance contracts and conservation work, and investment in an on-campus, combined heat and power plant,” said Brown. “By working together on projects related to energy retrofits in buildings, biogas and bioenergy, microgrid management, innovative transportation systems and perhaps even geothermal energy, Ameresco and RMI will help us bring our ambitions to fruition. It’s an exciting time to be a Sun Devil.”

Sophomore to be triple threat in 2016

ASU sophomore Kimberly Koerth will end up with three degrees at the age of 19 when she graduates in 2016.

Sophomore to be triple threat in 2016

ASU sophomore Kimberly Koerth and Christopher Callahan, dean of ASU's Walter Cronkite School of Journalism and Mass Communication, have developed a sort of comedic patter over the past few semesters. 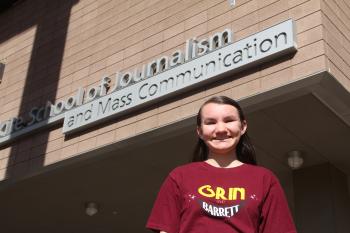 “Dean Callahan will be walking on campus with someone and then he’ll stop and say, ‘Ooh, Kimberly Koerth. Stop right there! May I brag about you to my friend here?’ I usually shrug my shoulders and reply, ‘Sure, how can I say no?’”

The high-achieving Koerth certainly has a lot to brag about. She skipped a grade in elementary school and started taking classes at Central Arizona College in Coolidge, Ariz., at age 12; four years later she graduated from Casa Verde High School in Casa Grande, Ariz., and collected an associate of arts degree at age 15 – maintaining a 4.0 GPA at both institutions.

“Most people are of the belief that fun or a social life must be sacrificed in order to succeed in academics,” Koerth said. “And to that I say books and academics are fun, too.”

The National Merit Scholar received international attention when she obtained her high school diploma and associate of arts degree at the same time, which prompted feature stories in The Huffington Post, The Daily Mail, ABC15.com and Good Morning America.

Koerth applied to Columbia University in New York and the University of Arizona in Tucson, but ultimately chose ASU because of the Cronkite School’s national reputation and strong programming at Barrett, the Honors College. She was admitted in 2012 to ASU’s Barrett, the Honors College and the Walter Cronkite School of Journalism and Mass Communication, where she is on track to receive three degrees. Koerth will graduate in 2016 with bachelor’s degrees in journalism and English, and a master’s degree in mass communication.

“The entire college experience has been wonderful in terms of extracurricular activities and rooting for all the sports teams, but there’s still a strong emphasis on academics and research opportunities,” Koerth said. “I’ve made friends, too. Let’s just say I’m not lonely.”

In addition to taking 20 credit hours in the summer and 18 credit hours this semester, Koerth is making sure to carve out time for extracurricular activities that round her out as a human being. Koerth serves as the chief copy editor for the Downtown Devil, an online publication run by ASU students. She is also an intern for the Cronkite Journal, a secretary for Phoenexus – a Downtown Phoenix collaborative devoted to creative writing – and an assistant community director for BLAST’D, a Barrett Honors community service group. In her spare time she participates in poetry slams around downtown, partakes in First Fridays in Phoenix and usually attends concerts with her dad on weekends. Koerth insists sleep factors in somewhere, but it’s not high on the priority list.

“I definitely want to experience everything the university has to offer and I’m doing it at a faster pace than most,” Koerth said. “I wouldn’t say there’s a sense of urgency because I’m doing what I like to do.”

Koerth envisions her professional life in three acts: as a reporter, copy editor and a teacher.

“Copy editing is what I really love to do because I’m a perfectionist,” Koerth said. “I’ll even critique some of my friends' emails and say to myself, ‘That comma is in the wrong place and this word doesn’t mean what you think it does.’ I want to be the person in the newsroom who sees those things and fixes them.”

Ultimately, the young scholar sees herself in a college or university setting. But that means obtaining a fourth degree, which Koerth will commence upon graduation. She plans to enroll in the Teach for America program in 2016 to get her master's in English or literature.

“That degree would enable me to teach at a university or community college in a few years,” Koerth said. “That may or may not change but I’m confident I’ll have many choices when I’m ready to start my career.”