ASU, Nigerian center partner to turn waste into a resource

On average, the 21 million inhabitants of Lagos, Nigeria, the second fastest-growing city in Africa, throw out 12,000 tons of waste a day. Health concerns arise when that waste is compounded by air pollution and cramped living spaces. Nigerian leaders turned to Arizona State University and the City of Phoenix’s Resource Innovation and Solutions Network (RISN) to improve Lagos’ sanitation infrastructure by establishing a hub called RISN Nigeria.

“Lagos’ booming population is putting stress on a waste system that is already suffering,” said Olufemi Olarewaju, co-founder of the Sustainability School Lagos, leader of its Sustainability Solutions Practice and a research fellow at the Center for Public Policy Alternatives. “We now realize that Lagos’ waste is a resource – a resource that can be used to create jobs, products and renewable energy. RISN Nigeria will bring public and private collaborators together to research and deploy technologies like biomass and foster the education of future waste entrepreneurs.” 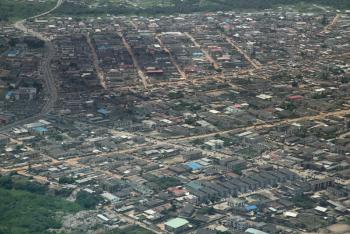 RISN Nigeria is the first international hub of the Resource Innovation and Solutions Network, a partnership between ASU’s Global Sustainability Solutions Services, a program of the Rob and Melani Walton Sustainability Solutions Initiatives, and the City of Phoenix’s Reimagine Phoenix program. It will be housed in the Sustainability School Lagos, harnessing the knowledge of local and global academics, practitioners, consultants and students that will help inform Lagos’ waste solutions.

“RISN Nigeria will help Lagos sustainably provide for its growing population’s resource consumption,” said Dan O’Neill, general manager of the Global Sustainability Solutions Services. “ASU partnered with the City of Phoenix to establish the first RISN hub in Phoenix, and now we’re able to transfer what we’ve learned and implemented to Lagos. The wicked or complex issues of sustainability require a global effort by every knowledge base out there, and we’re proud to be a part of the solution.”

In recognition of the impact of humans, from civilization to climate change, the Origins Project at Arizona State University will focus its 2015 activities on the "Year of the Anthropocene."

For good or bad, humans have left an indelible imprint on Earth. In recognition of the impact of humans, from civilization to climate change, the Origins Project at Arizona State University will focus its 2015 activities on the "Year of the Anthropocene." In addition, Origins will launch an exciting new series involving dialogues with major public figures. 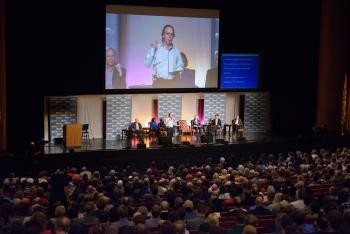 “When considering possible topics, the Anthropocene jumped out immediately. Not only does humanity face a crossroads as it determines how it will respond to pressures in the 21st century that for the first time reflect the truly global impact of humanity on the development of our planet, but ASU is well positioned to lead in research regarding addressing these challenges. Origins can continue to galvanize public interest in these questions by bringing in the best minds from around the world, and also encouraging writers and other artists to collaborate with us to find answers that will affect the future for our children and grandchildren,” Krauss added.

“In addition, encouraged by the public interest in our Great Debate programs, we decided to launch a new series of more intimate dialogues with major figures from science, humanities, politics and the arts, and are extremely excited to host two dialogues in 2015 with actor Alan Alda and world-renowned public intellectual Noam Chomsky,” Krauss said. “These should be great opportunities to explore in-depth not only their ideas, but also what motivated them to do what they have done.”

Here are the public events the Origins Project has planned for 2015:

An Origins Project Dialogue featuring Emmy Award-winning actor Alan Alda and Krauss, in a candid and unscripted conversation, will talk about the role of science and creativity in society. In "Science and Art, Long Lost Lovers," Alda and Krauss will talk about how science and art are very similar and complimentary rather than residing on the opposite ends of human creativity. The event will be held at 7 p.m., Jan. 15, at the Orpheum Theatre in Phoenix.

One of the most powerful forces on Earth is extinction. In a public Great Debate, "Extinctions: Tragedy to Opportunity," (7 p.m., Feb. 7) to be held in ASU’s Gammage Auditorium, a celebrated panel of experts will talk about extinctions through history, from simple biological systems to modern technology, including the debate of what can be done to calm the current rate of extinctions to a perspective of extinctions as evolutionary opportunities, from biology to technology. Panelists include poet and naturalist Diane Ackerman, geneticist Craig Venter, evolutionary biologist Neil Shubin, ASU President Michael Crow, paleogeneticist Svante Paabo and planetary scientist Lindy Elkins-Tanton. Krauss will moderate.

American linguist, philosopher and cognitive scientist Noam Chomsky will engage with Krauss in an Origins Project Dialogue on "Science, Mind and Politics." The two will talk about contemporary issues on the nature of humanity, the power of science and the mind, and efforts in global social justice. The event will be held at 7 p.m., March 22, at ASU’s Gammage Auditorium.

A Great Debate on "Water: From Habitable Planet to Water Wars" will be held at 7 p.m., April 4, at ASU’s Gammage Auditorium. The debate will feature a high level panel of experts discussing the origins of planetary water, water in the solar system, the influence of water on life and the water challenges we will face in the 21st century, including water shortages during times of rising sea levels. Krauss will moderate, and an exciting panel is currently being assembled.

“We are certain these events will continue our tradition of bringing programs to Tempe and ASU that cannot be seen anywhere else in the world, explore questions of pressing public and scholarly interest, and in the process help continue to excite our loyal audience to boldly go where no one has gone before,” said Krauss.

There are also a limited number of free tickets available – first-come, first-served – to all Origins Project events at Gammage. Persons must be present, in person, with a valid ASU ID at the Gammage Box Office.

ASU students with proper ID can receive tickets at no cost (limited seating) but must be present, in person, at the Phoenix Convention Center Box Office from now until 4 p.m., Jan 15, or at the Orpheum Theatre Box Office (203 W. Adams St., Phoenix) after 4 p.m., Jan. 15 (two hours before showtime) on the day of the performance.