Vladislav Vysotsky, an assistant professor in the School of Mathematical and Statistical Sciences within the College of Liberal Arts and Sciences, has won a prestigious Marie Curie Actions International Incoming Fellowship by the European Commission. Top-class researchers from outside Europe are selected for the fellowship to encourage research cooperation between Europe and other parts of the world.

Vysotsky will begin his two-year fellowship project this fall at the mathematics department of Imperial College London, which is consistently ranked as one of the top universities in the world. He will work with professor Alex Mijatovic, an expert in probability theory and its applications in financial mathematics and co-head of Imperial Probability, an association of researchers across scientific disciplines at Imperial College with a common interest in probability.

“We are interested in similar types of problems, and the basis of our collaboration is the complementary nature of our skills,” says Vysotsky. “I am an expert in theoretical probability and discrete-time stochastic processes, while professor Mijatovic specializes in continuous-time processes with jumps, and has well-established relations with financial market practitioners.”

Their research project aims to have an impact on significant practical and theoretical problems of much interest to physicists, mathematicians, financial risk managers and others who are interested in evaluating the risk of random events.

Vysotsky is looking forward not only to working with Mijatovic, but also establishing collaborations with other probabilists and specialists in other areas of mathematics, including the famous group on dynamical systems at Imperial. Another benefit of the location is that London is ideally connected with the world-leading centers of probability theory, including University of Warwick in the UK and Universities of Pierre et Marie Curie and Paris-Sud in Paris.

Vykotsky earned a master of science in mathematics and a doctoral degree in probability theory from St. Petersburg State University, Russia, and was a visiting assistant professor at the University of Delaware.

The project is an extension of the EVOKE pilot, launched in 2010 and aimed specifically at engaging teens and young adults in Africa. The story of the original EVOKE graphic novel and alternate reality game follows a secretive group of African social innovators in the year 2020 who use their talents to address global grand challenges such as food insecurity, access to clean water, poverty and climate disruption. The original EVOKE game was developed by the World Bank in collaboration with Jane McGonigal, author of the book "Reality is Broken: Why Games Make Us Better and How They Can Change the World." Since 2010, EVOKE has been played by hundreds of thousands of people all over the world, and has expanded to Colombia, Mexico and Brazil. 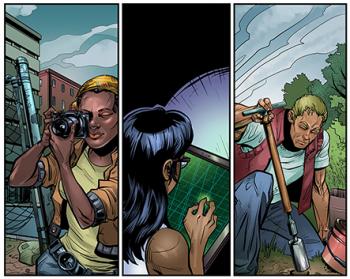 This new partnership between the World Bank and the Center for Science and the Imagination will expand EVOKE’s network of creators to include world-renowned science fiction authors from ASU's Project Hieroglyph, futurists, visual artists and subject area experts on a range of pressing global issues. These contributors will collaborate to build narratives in EVOKE’s fictional universe that will power future deployments in Africa and other regions.

“Storytelling is an incredibly powerful tool for encouraging people to prototype possible futures that they actually want to inhabit,” says Ed Finn, director of the Center for Science and the Imagination and assistant professor in the School of Arts, Media and Engineering and Department of English. “When those stories are infused with real-world knowledge, they give people a sense of agency about the future. Stories can be a bridge from imaginative visions to real-world impact, and EVOKE is an exciting example of using stories to make innovation happen.”

During summer 2014, graphic novelist, filmmaker and author Kiyash Monsef and anthologist, author and Project Hieroglyph co-editor Kathryn Cramer are creating a “story bible” that maps out the history, background, setting, main characters and overall aesthetic of the EVOKE fictional universe, providing a common foundation for contributions from a diverse set of writers and artists for future EVOKE episodes. Throughout the summer, science fiction writers and futurists will collaborate virtually on ASU’s Project Hieroglyph digital platform, using the story bible as a launch pad to create characters, scenarios and stories that connect EVOKE’s fictional universe to real-world challenges and actual scientific and technological realities.

“The opportunity to merge the creative voice of Project Hieroglyph and the World Bank focus on empowering young people is incredibly exciting,” says Bob Hawkins, senior education specialist at the World Bank. “Tapping into the vision and voices of some of the greatest storytellers in science fiction is a powerful way to inspire young people around the world to take the first step to addressing global grand challenges and creating a more prosperous future.”

In fall 2014, the Center for Science and the Imagination will host a multi-day “Narrative Hackathon” event at ASU, uniting several interdisciplinary teams of writers, futurists, artists and subject area experts in-person to build stories, art and game mechanics for future EVOKE deployments. Each team will start with a specific grand challenge, creating materials that tell compelling stories while simultaneously inspiring readers and players to take concrete, tangible actions to improve their communities, and to plan social ventures tailored to the specific needs of those communities.

“EVOKE and ASU share the goal of developing solutions to a range of complex global challenges,” says Ed Finn. “We’re excited to bring two great experiments together in Project Hieroglyph and EVOKE. This collaboration fuses literary and artistic approaches with the amazing research that is going on at the university, and we look forward to igniting new conversations at ASU and expanding the Center for Science and the Imagination’s global impact.”