Next week, a visual and infrared camera designed at Arizona State University will pass 60,000 orbits of the Red Planet.

It is carried on NASA's Mars Odyssey orbiter, the longest-operating spacecraft from any nation at Mars. The long run has allowed the camera to take nearly 400,000 images, enabling scientists to map much of the planet's surface. 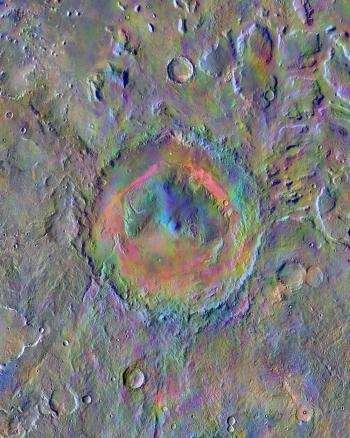 "Mars Odyssey's enduring success has let THEMIS achieve a longer run of observations than any previous instrument at Mars," said Christensen, Regents Professor of Geological Sciences and the Ed and Helen Korrick Professor in the School of Earth and Space Exploration at ASU.

"THEMIS has thus provided the context for most recent Mars scientific research. We're very grateful to the scientists, engineers and technicians who have kept the spacecraft in good health."

He added, "THEMIS also continues a tradition of ASU instruments working at Mars. This began almost 20 years ago, with our Thermal Emission Spectrometer (TES), which flew on NASA's Mars Global Surveyor, operating from 1996 to 2006."

Even today, Christensen said, he uses THEMIS in his class for first-year undergraduate students. He challenges the class to think of a geology problem, and the students then target THEMIS to take images to resolve the question.

"THEMIS brings Mars exploration directly into their studies," he said.

As of this week, THEMIS has produced 208,240 images in visible-light wavelengths and 188,760 in thermal-infrared wavelengths. THEMIS images are the basis for detailed global maps and for identification of some surface materials, such as chloride salt deposits and silica-rich terrain. Its infrared imaging also indicates how quickly different parts of the surface cool off at night or warm up in sunlight, which provides information about how dusty or rocky the ground is.

These observations have allowed scientists to map the properties of the surface materials over nearly all of Mars. A particular area of interest is 96-mile-wide Gale Crater, currently the exploration site of the Mars Science Laboratory rover, Curiosity.

"The spacecraft is in good health, with all subsystems functional and with enough propellant for about 10 more years," said Mars Odyssey project manager David Lehman of NASA's Jet Propulsion Laboratory.

Besides conducting observations, Odyssey also serves as a crucial communications relay to Earth for the two active rovers, Curiosity and Opportunity, operating on the Martian surface.

In 2014, Odyssey began a gradual drift in its orbit designed to begin passing over terrain lit by early morning sunlight rather than afternoon light. In its orbit, the spacecraft always flies near each pole. Its current orbit flies along the "terminator" line between night and day both on the northbound and southbound halves of each circuit. The drift will be halted later this year with a maneuver to lock in the Martian time of day that Odyssey crosses the equator.

The goal of the orbit change is to let THEMIS systematically observe the Martian atmosphere and surface shortly after local sunrise. This is to detect transient atmospheric features such as frosts, fogs, hazes and clouds that burn off or vanish as the Martian day goes on.

Already, an example of this are the clouds that gather around the upper slopes and in the vast summit pit (caldera) of Pavonis Mons. This is one of the giant volcanoes in the Tharsis area, with a summit that reaches about nine miles above the average radius of Mars, a datum that serves as "sea level."

Christensen says, "Pursuing a 'dawn patrol' with THEMIS gives us hope we can catch in the act and study daily effects, seasonal ones, and even those which we think change from year-to-Martian-year."

The Jet Propulsion Laboratory, a division of the California Institute of Technology in Pasadena, manages the Mars Odyssey project for NASA's Science Mission Directorate, Washington.

Discoveries The College of Liberal Arts and Sciences Space exploration

Richard Olson remembers when Arizona State University didn't have a streak of green running through this maroon and gold campus. The self-proclaimed tree hugger has been active in green initiatives for all his nearly 30 years with the university.

Richard Olson remembers when Arizona State University didn’t have a streak of green running through this maroon and gold campus.

This was back in the mid-’80s, long before ASU had installed a host of initiatives to improve its sustainability and trend toward the goal of being an environmentally friendly campus. 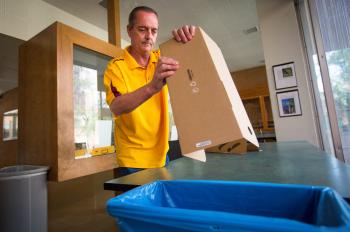 Back then Olson was in the shipping and receiving area of ASU’s purchasing department, watching tall piles of cardboard and used wooden pallets simply being tossed into the dump with all the other trash.

“I just couldn’t stand by and see this, being the environmental tree hugger that I am,” Olson said.

So the tree hugger did something about it, calling the City of Tempe to ask how all this cardboard could be recycled. Turns out, if he bundled the material properly, someone from the city would come and pick it up. Problem solved. Environmental guilt sated.

Now, nobody is saying this was the start of ASU’s green streak. But nearly 30 years later, Olson can say it’s one of those moments that affirmed he could make an environmental difference here.

As this Minnesota native moved into the School of Life Sciences, he carried the recycling initiative with him, ensuring the school was doing its part by becoming its recycling coordinator in 1989. He has been doing the job, along with regular duties as the school's shipping and receiving coordinator, ever since.

“He is always seeking to improve the collections efficiency in all of the Life Sciences buildings,” said Lucas Mariacher, a recycling technician for ASU. “I wish I had a Rick Olson in every single building on campus.”

Olson is a rare specimen, but especially so in the Phoenix metro area. In a place where everyone drives seemingly everywhere – especially during the summer months – Olson walks, bikes and uses public transport to get around. He hasn’t had a car since 1990, when he sold his ride after his kids challenged him to do more to combat pollution.

"It was rough the first few years. I mean, I was getting kidded by everybody. They thought I was nuts," he said. "I needed to do something drastic, so I just don't drive. It's my thing. ... There are times I wish I had a car, it's kind of hard to date."

As he approaches three decades at ASU, Olson can reflect on his devotion to making this a more green place and the joy he feels in seeing how environmentally friendly the university has become.

Still, there’s one more change he’d like to make. It involves the autoclaves used to sterilize various items in the School of Life Sciences. They use water to generate steam, but once the sterilization cycle is complete the excess water is simply sent flowing down a drain.

Olson can’t stand it. This guy from the land of 10,000 lakes is a “water guy.” So years ago he proposed an idea to capture the water and reuse it to hydrate various plants around ASU. The plan earned him a second-place prize and $1,000 from the Walton Sustainability Solutions Initiatives. Though his idea wasn't implemented, his hope hasn't died.

“I’m going to push this thing one more time.”