When community leaders talk about imagining futures for Phoenix, a dystopic vision is probably not what they have in mind. But the post-revolutionary landscapes in ASU's MainStage production of “The Hungry Woman: A Mexican Medea” stand as an omen in a city that is often at the epicenter of social justice debates.

Last year, Arizona State University's award-winning Performance in the Borderlands initiative hosted a successful reading of Cherríe Moraga's “The Hungry Woman” as part of the popular Banned Plays Public Reading Series. This year, the play is coming to ASU’s MainStage, featuring a cast of current ASU theater students under the direction of visiting professor Dora Arreola. 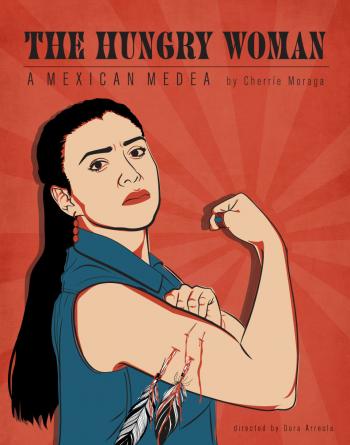 “Medea is a dangerous myth,” said Lance Gharavi, associate professor and assistant director for the School of Film, Dance and Theatre, “… for the depth and ferocity of passion it unleashes. But Moraga’s play makes it more dangerous still. It gives thunderous voice to identities largely ignored or silenced by dominant cultures and institutional structures. It’s a dangerous play; a play of terrible beauty. And a provocative way to open our season.”

The plot of “The Hungry Woman” is a riff on Euripedes’ “Medea,” the famous Greek tragedy in which the leading lady kills her children as an act of revenge against her unfaithful husband. But Moraga’s version of the story also incorporates elements of the Mexican La Llorana legend – she drowns her own children and wanders the Earth for all eternity trying to find them – and the Aztec story of Coatlicue, “Mother of the Gods,” who represents both life and death.

Erica Ocegueda, a graduate student in the School of Film, Dance and Theatre who serves as both the researcher and choreographer for this production, explained that the play takes a story that is fairly well-known in the Western world and overlays it with cultural references that are maybe less familiar. This allows viewers to see an old story in a whole new light.

This merging of cultural contexts would be enough to bolster many of the important themes in the work (race relations, outsider identity and gender parity, to name a few), but the futuristic setting takes the show to a whole new level.

Scenic designer Douglas Clarke, an alumnus of the School of Film, Dance and Theatre, said his work on the show has been “all about bringing out the Mesoamerican spiritual aspect within a world that is years and years and years from now after a revolution.”

Though “The Hungry Woman” does take place in Phoenix, it’s not the Phoenix we know. In Moraga’s futuristic vision, a revolution divides the U.S. into race-based territories. Medea is forced to leave her homeland, Aztlán, after a counter-revolution bans homosexuals from the region. She moves into exile in Phoenix with her girlfriend, Luna, and son, Chac-Mool, but faces constant threats from her husband, Jasón, who wants to take their son back to Aztlán.

“I’m used to working with very clean lines,” said Clarke. “This time, because of the dangerous world after revolution, there’s more of a grittiness to it.”

And that grittiness comes across in more than just the setting.

“(The play) deals with strong stuff: killing a kid, exile of queer people, race war. I feel like Moraga’s really putting it all on stage,” said Ocegueda.

If that sounds heavy, it’s because it is. But it’s also gripping and relevant, Gharavi says.

Both Arreola and Oceguenda have worked on “The Hungry Woman” before in different locations, but there’s something special about producing the show here.

“To do this play in the place suggested by the writer is bringing us to another dimension of work,” said Arreola.

This is why Moraga is coming to interact with this particular production of her show firsthand. A series of special events featuring the esteemed writer and activist will accompany the show during the weekend of Oct. 24 and 25. The programming focuses on creating a space for dialogue to address some of the socially and politically charged themes in “The Hungry Woman.”

“I hope the audience will understand that the vision of Moraga is to change society,” said Arreola. “This struggle is not new; it’s rooted in the struggle of indigenous women all over the world. (Moraga) has a vision for a new order, a new society with justice and equality. The audience should leave hoping to change the world.”

Sarah Galvin's award-winning research into developing next-generation electronics has provided her more than $10,000 in total scholarship money and a ticket to the prestigious Nobel Prize ceremonies in Stockholm.

“Someone told me that scientists get to blow things up. So I knew exactly what I wanted to be," she says. 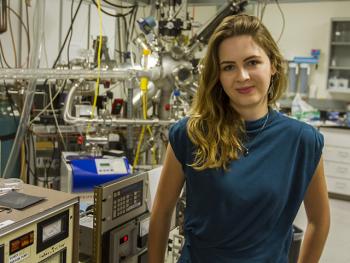 In high school, she excelled in chemistry, and every other subject, and didn’t want to wait until college to start putting her interests in science into action.

She began looking into research opportunities open to high school students through Arizona State University's Southwest Center for Education and the Natural Environment (SCENE), and became intrigued by the description of work led by Nathan Newman, a professor in the School for Engineering of Matter, Transport and Energy, one of ASU’s Ira A. Fulton Schools of Engineering.

One of Newman’s projects involved his lab team’s efforts to help make the technological breakthroughs necessary to develop next-generation electronics. It involved applying quantum mechanics, manipulating electrons and combining existing materials and creating new ones to make new energy devices, and something called spintronics – short for spin transport electronics – all of which attracted Galvin.

For two years, as she finished high school, Galvin spent what time she could in Newman’s lab. She experimented with combining various materials to fashion small structures called tunnel junctions that are capable of using magnetism rather than an electrical current to power devices – a method promising to enable development of electronic devices that would be more compact and energy efficient, and would operate more rapidly.

The technology promises not only higher-performing consumer electronics, Newman said, but also new devices that could significantly improve the energy efficiency of the kind of advanced supercomputers used by the likes of Google, Yahoo and the National Security Agency.

Galvin's work in Newman's lab earned her a first-place prize at the Intel International Science and Engineering Fair, where she competed against 1,700 of the top high school students from 70 countries around the world – all before graduating from Corona del Sol High School last spring.

Her prize brought with it two scholarships totaling $8,000 and a ticket to the prestigious Nobel Prize ceremonies in Stockholm – a perk of the Dudley R. Herschbach Award, which enables Galvin to join some of the world’s most promising young science students this December at the Stockholm International Youth Science Seminar in Sweden.

Galvin's Intel entry was also selected as the best project in computer engineering, earning her the K. Soumyanath Memorial Award, which provides a $3,000 scholarship. Additionally, the same project won her a Future Innovators of the Year Award, one of the annual Arizona Governor’s Celebration of Innovation awards to be presented next month.

Her work in Newman’s lab became the basis for the project she entered in the Intel Fair (called “An Innovative Approach to Improve Spin Polarization in Co2FeAl0.5Si0.5 Thin Films for Spin Transport Electronics”), and her success has helped to secure a position as an undergraduate research associate in Newman’s lab, giving her the opportunity to continue pursuing advances in spintronics.

Leadership in the lab

For the immediate future, Galvin's research will be concentrated on producing inexpensive, large-area photovoltaic technology that can be used on building exteriors to generate solar energy, Newman said.

He has little doubt that she will make progress in the effort.

“Most younger students will typically do a small part of the work on projects like this, and then turn things over to an experienced graduate student,” Newman said. “But with some guidance, Sarah has handled most of it herself, including the physics, the engineering and the application of scientific method.”

Galvin has shared authorship credits with Newman and other members of his research team on a paper published in the prominent research journal Applied Physics Letters, a publication of the American Physics Institute.

Her work with Newman’s lab drove Galvin’s decision to major in electrical engineering, a degree program in the School of Electrical, Computer and Energy Engineering.

“I decided on engineering because I like being able to physically do things and create something,” she said. “I like the mechanics of it, as opposed to some areas of science where you mostly observe and study things. In engineering I can see where I might be able to do something that makes a difference, and so much is happening in electrical engineering right now.”

See Galvin and Newman discuss their research on the show "Horizon." Galvin's story was also featured by Channel 12 News in Phoenix.